A new report that calls for overhauling Georgia’s method of paying for K-12 education has landed near the starting gate of a potentially contentious gubernatorial campaign. 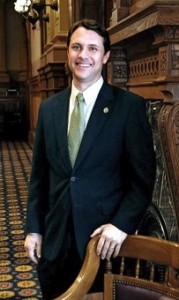 Sen. Jason Carter, as portrayed in his Senate photograph

State Sen. Jason Carter (D-Decatur) has put education reform at the front and center of his new platform. Gov. Nathan Deal responded immediately that he has increased the state’s contribution to school funding despite the recession.

The timing couldn’t be better for a report from the Georgia Budget and Policy Institute that calls for the creation of a funding program to replace the state’s existing school funding formula, known as QBE (Quality Basic Education).

The call for action in GBPI’s report states:

QBE was enacted in 1985, a time when Pete Rose was a national baseball icon who had not yet been busted as a baseball gambler, and Joe Frank Harris was Georgia’s governor. QBE was intended to equalize school funding so that children had a shot at the same quality of education regardless of whether they lived in a rich or poorer school district.

Georgia’s schools were ranked 20th in the nation in an April report by usnews.com. The same report listed the top 10 high schools in Georgia as being in cities – metro Atlanta, Augusta, Columbus and Savannah. One Georgia school was ranked No. 3 in the nation – Gwinnett County’s School of Mathematics, Science and Technology, in Lawrenceville.

State lawmakers have tinkered with the QBE program over the years. Most notably, then-Gov. Sonny Perdue sought to remake the allotment formula as part of an effort to put a Republican stamp on education. The legislature didn’t enact wide-ranging revisions.

By many counts, Carter’s candidacy should be a long shot in a state that has voted Republican so consistently on so many levels. But as saportareport.com columnist Tom Baxter noted, Deal’s swift response to Carter’s announcement suggests the governor takes the threat seriously. Deal ran out a rebuttal to Carter’s comments that is similar to one from the spring, when the purpose seemed intended to undercut the inter-party challenge Deal faces from state school Superintendent John Barge – who is running on an education platform.

GBPI contends that Georgia lawmakers have been underfunding the QBE formula for 12 years, long before the recent – and lingering – recession.

This situation is fueling GBPI’s position, outlined in the new report, that the realities of funding pressures and evolution within education have created a need for a totally new method of providing funds for public education. The report is anything but shrill and even praises lawmakers for past successes:

Of course, that kind of kudo is going to be followed by a “but.” And GBPI’s version is:

The new report follows up on a GBPI report in September that argued the Legislature has cut billions from K-12 education. Notwithstanding Deal’s claim after Carter’s announcement, GBPI’s report says the current school year is the fifth for which the Legislature cut $1 billion or more from the QBE formula. This is the 12th consecutive year QBE has been underfunded, according to the report.

Education funding is stepping onto a stage that’s already crowded with revenue issues. Some advocates of a proposed fair tax would like to see tax reform put on the ballot as early as 2014, and backers include Americans for Progress, though its chief has stepped down to join Ralph Reed’s Faith and Freedom Coalition.

Previous Article
The Actress and the Planter: A Lesser-Known Civil War Story
Next Article
Find the Best Medicare Part D or Advantage Plan with Free Website