It turns out that more than $18 billion really doesn’t go as far as it used to.

That’s the amount to be raised within the next decade if voters in July approve the 1 percent sales tax for transportation in each of Georgia’s 12 special tax districts. Even that amount didn’t provide for the majority of road, transit and airport projects initially proposed.

Nor does the sum begin to make a dent in the $18 billion to $20 billion list of upgrades that must be made to the state’s freight handling systems – its highways, railroads, Savannah seaport and airports in Atlanta and Albany, according to a new report from the Georgia Department of Transportation. 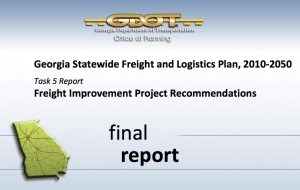 Just $500 million of the projects to be paid for by the proposed transportation sales tax will address the separate needs of the state’s freight handling systems, according to the GDOT report. That amounts to 2.5 percent of the needs in the freight system.

The report is sobering. It links Georgia lingering economic malaise to a failure to invest in freight handling systems:

“Georgia has a world-class freight infrastructure that is critical to the State’s economic competitiveness.

“This infrastructure was developed through several decades of outsized investment by both the public and private sectors.

“Over the last 20 years, this investment has decreased, and this has in part been a contributor to the economic stagnation of Georgia relative to the rest of the U.S. since 2000.”

The report, “Georgia Statewide Freight and Logistics Plan, 2010-2050,” was prepared by the Atlanta office of Massachusetts-based Cambridge Systematics, Inc.

Click here to read the report on proposals to upgrade the freight system.

This economic stagnation is so entrenched that Georgia won’t recover the jobs it lost during the recession until 2020, according to Robert Sumichrast, dean of UGA’s Terry College of Business. That’s four years longer than forecast for the rest of the nation.

Click here to read about Sumichrast’s comments in a previous story in saportareport.com.

These freight-handling systems would appear to be as important as the mobility of the traveling public, given the full-court press to deepen the Savannah Harbor.

One central issue that’s not received much attention in public is how the Savannah port – and its feeder network of highways and railroads – is supposed to handle the additional cargo that’s to flow through it once bigger vessels start arriving at the port.

The port is slated to reach capacity by about 2026, according to a Georgia Ports Authority section of the report. That projection appears to be based on current growth trends. The report does not mention if it accounts for the bigger cargos expected to arrive once the harbor is deepened and able to accommodate bigger vessels that are expected along the East Coast once the Panama Canal is expanded.

The report states that there’s no easy source of money in sight to pay for upgrades to the freight systems.

“Funding the ‘Freight & Logistics Action Plan’ will be a challenge,” according to the report, which goes on to acknowledge potential help from the transportation sales tax. “However, the vast majority of recommended freight improvement projects will require alternative funding sources.”

According to the report, those sources include general funds at the state and federal levels for the harbor deepening; private funds for the railroads; federal, state and local funds for airports; and federal and state funding for highways, with some money from the local governments and the proposed transportation sales tax.

Georgia’s ability to handle freight would seem to be uppermost on the minds of policymakers as they lobby the federal government to deepen the Savannah Harbor.

It clearly is on the governor’s radar.

Gov. Nathan Deal said at the State of the Ports luncheon in October that upgrades to the state’s freight systems would be delayed if voters reject the T-SPLOST referendums, as in “transportation special purpose local option sales tax.”

“There are portions of the overall (cargo distribution) plan embedded in the T-SPLOSTs, so we hope they pass,” Deal said. “Without revenue from the T-SPLOST, we’ll have to ask local governments and the state to come up with the money.

“It will just take more time and won’t be as easy.”