A new report on state funding for K-12 education raises some challenging questions about Georgia’s ability to provide a skilled workforce to businesses – especially in areas beyond metro Atlanta. 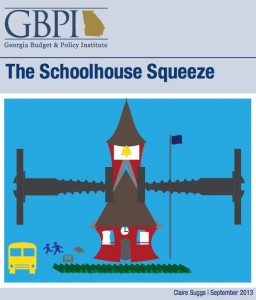 Georgia’s funding of K-12 education raises questions about its ability to provide a trained workforce, according to a new report from the Georgia Budget and Policy Institute. Credit: GBPI

School districts are coping with funding cuts through measures including trimming days from the school year and assigning more students to each teacher, according to the report from the Georgia Budget and Policy Institute. School budgets are squeezed by shrinking state support and by the declining local tax base caused by the recession, the report states.

Even as school districts are strapped, the Georgia Department of Economic Development is touting Georgia’s workforce development policies including its support for charter schools, pre-K programs, HOPE scholarships, and strong public technical schools and universities. Georgia has adopted common core standards in math and language arts, and allocates extra funding to districts that provide gifted programs, according to DEcD’s webpage.

A skilled workforce has always been a crucial component in attracting and retaining industries. The issue of a rising shortage of skilled workers gained attention as a real national concern during the fallout of the recession.

As manufacturing regained strength in 2010, companies reported that they couldn’t fill jobs because of a shortage of skilled workers, according to the American Enterprise Institute.

In recent months, the shortage of skilled workers has become evident in construction, where labor constraints are impeding the recovery in some markets, according to sources including the Federal Reserve cited in an article report last month by bloomberg.com.

Georgia’s policy makers have established programs to foster a skilled workforce, according to the report by Claire Suggs, GBPI’s senior education policy analyst. However, the report contends, the state has not provided the resources necessary to accomplish the mission:

As evidence to support its position, the GBPI report provides information for state education and the impact created by cutbacks during the recession in each of Georgia’s 180 school districts. A few highlighted examples of the impact on districts include:

The GBPI report includes mention of the rising number of children in poverty. Although much of the poverty is concentrated in districts outside metro Atlanta, poverty is growing significantly in Atlanta’s suburbs, according to the discussion at a recent meeting of the Atlanta Regional Housing Forum.

Students need extra help at school when they live in poor households, according to the GBPI report:

As an aside, a new study reported in Science magazine reports that parents who are in poverty are less able to tend to their children. The article is behind a paywall, but a review is available on theatlanticcities.com.

The report in Science contends that poverty causes such a massive cognitive overload that it reduces IQ by 13 points, comparable to the mental loss of chronic alcoholics compared to normal adults. The loss of mental capacity results in an inability to do activities such as active parenting and paying bills on time – even when money is at hand.