Editors’s Note: This story has been updated to include a new RFP issued for a marketing contract. 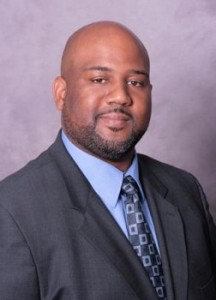 Tomlinson, executive director of the State Road and Tollway Authority, responded with a message that emphasized themes of communication and transparency.

The message could go a long way for a state entity that wields tremendous power over Georgia’s transportation system, but operates largely out of the public spotlight. SRTA is chaired by the governor and has the power to plan, develop and build roads funded by federal and state sources – in addition to tolls.

Richard Anderson, GRTA’s vice chairman, raised the issue of communication at a time the state plans new toll lanes to relieve traffic congestion outside I-285: “My question goes to communication.”

Tomlinson responded directly on point, although he had just presented a full report explaining the process for removing all traces of the tolls on Ga. 400.

“It has to be a comprehensive plan,” Tomlinson said.

Tomlinson said he and his deputy executive director, Bert Brantley, will meet personally with stakeholder groups and the general public to communicate the message and gather comments.

One of Tomlinson’s first acts as executive director evidently was to take control of SRTA’s communications message.

Tomlinson was appointed as executive director on March 27. Two days later, SRTA cancelled a request for proposals from marketing consultants. The state contract was to devise a communications program to handle a broad array of communications outreach. A new RFP has been issued and SRTA expects to hire a team soon.

According to the initial RFP, released early this year, the tasks of the marketing consultant: 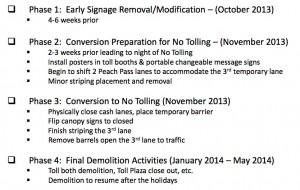 This is the timeline for removing the toll structures from Ga. 400. Credit: SRTA

By bringing Brantley on board, Tomlinson has immediate access to the insights of a seasoned government-sector public affairs director.

Regarding the tollway message that Anderson raised, Tomlinson said SRTA will take a lead role in explaining the government’s vision of the planned tollway system. That plan, which is developing under Gov. Nathan Deal’s watch, relies on the construction of new toll lanes on highways outside of I-285. No existing lanes will be converted to tolled lanes under the Deal plan, though that was the case under Perdue. Meanwhile, the state Department of Transportation will handle the traditional communications programs related to construction of future toll lanes, Tomlinson said.

“We’ll overlay additional publications and communications,” Tomlinson said of the role he and Brantley will perform.

Although SRTA doesn’t receive the same level of public attention paid to the state Transportation Department, SRTA is a significant agency in the state’s transportation system. SRTA’s predecessor was created in 1953 and its first job was to build the Sidney Lanier Bridge over the Brunswick River, by working with Glynn County and the city of Brunswick, according to a 2005 technical memorandum on SRTA’s history.

SRTA’s powers were significantly expanded under then Gov. Roy Barnes’ administration. Barnes envisioned using SRTA to accelerate funding for highway and transit projects. Under Perdue’s administration, SRTA’s role was expanded when the state authorized the private sector to propose transportation projects, which typically are paid with proceeds of toll revenues.