A new transit website serving metro Atlanta is an example of local agencies responding to an idea many view as sensible, and which results from legislation that wasn’t enacted by the General Assembly. 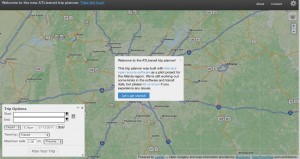 The trip planning page of ATLtransit.org provides an interactive user guide. Click on the image for a larger version. Credit: ATLtransit.org

In the first two weeks after its very soft launch, on July 1, ATLtransit.org has attracted slightly more than 1,000 views.

The website intends to help transit riders plan and pay for trips that involve riding one or more of the region’s transit systems. Four transit systems and ARC decided to build the site even though the Legislature did not vote for the concept brought forward by Sen. Brandon (R-Alpharetta).

Comments on a few blogs that have reported the website’s launch have observed that the site is less than robust and doesn’t have the same name as the one cited in Senate Resolution 735 – goatlatransit.com.

The reality is that the site was created voluntarily by entities that faced limitations.

They collaborated without legislative authorization, worked within their existing budgets, created pay platforms for the region’s four transit providers, and intentionally chose a name that’s slightly different from that in SR 735, in the event that legislation is re-introduced. 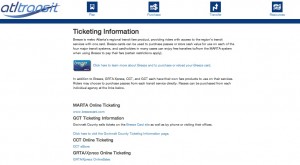 The website provides directions on how to purchase transit tickets that can be used on all four regional transit systems. Click on the image for a larger version. Credit: ATLtransit.org

The site observes its own limitations and indicates users can help improve it over time. The site observes that it is the first attempt to provide a single source of information to plan a trip across jurisdictions. The site is mobile compatible.

As the site observes:

In addition, the sponsors opted for a low-profile launch in order to provide time to fix any glitches before the site was swamped with traffic. By unveiling the website July 1, the site became active just before the long July 4 holiday weekend.

As Dick Anderson, vice chair of GRTA’s board, observed during an update on the website that was presented at the Georgia Regional Transit Authority’s March 12 meeting:

GRTA contributed to the site, along with MARTA, Cobb Community Transit, Gwinnett County Transit, and the ARC. The project leader was based out of the state’s Office of Planning and Budget, which serves as the governor’s budget-writing agency.

The four transit agencies and ARC present the website as a work in progress and ask for help in improving the site:

The Senate passed Beach’s resolution and the House State Planning and Community Affairs Committee favorably reported the bill. The House did not vote on SR 735.