"News of the World" movie poster

It’s a marvelous movie – an epic journey framed in the traditions of both the Old West and the classic Western as it’s been portrayed by Hollywood for over a century. There are echoes here of everything from Robert Altman’s “McCabe and Mrs. Miller” (the mud, the ceaseless rain, the shadowy faces illuminated by natural sources of light) to John Ford’s “The Searchers” (a lost child kidnapped when she was very young by Native Americans). 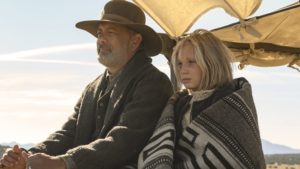 “News of the World” with Tom Hanks

The year is 1870. The place is north Texas where the wounds of the Civil War are still unhealed. Captain Jefferson Kyle Kidd (Hanks) served in the war. Now he travels the West, reading aloud from newspapers to anyone “with the time and 10 cents.”

His performances are reminiscent of Charles Dickens’ reading tours. He prepares for them, putting on a particular outfit, scanning a dozen papers for items he thinks will be of particular interest. A ferry boat sinks. A “pandemic” takes 97 lives in two months.

En route to his next engagement, Kidd comes across 10-year-old Johanna (Helena Zengel). Kidnapped by the Kiowa six years earlier, she strongly identifies with her captors. They are her family, not the aunt and uncle a federal agent was taking her to when Kidd finds her.  Much like Frodo and the One Ring, Kidd decides to finish the task because, quite simply, there is no one else to do it.

However, Johanna is still very much a feral kid, a wild child who bites, kicks and screams. And sings Indian chants. And eats with her hands (Kidd’s attempts to teach her to use a spoon are like something out of “The Miracle Worker.”) Most of all, the girl seeks to reunite with the Kiowa who pass through the film like ghostly illusions, disenfranchised and homeless. 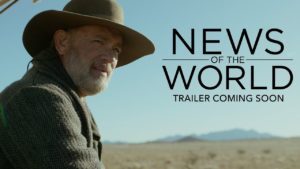 “News of the World” movie poster

The pair’s odyssey through 400 miles of Texas back-country is every bit as fraught as Frodo’s – or, for that matter, Martin Sheen’s in “Apocalypse Now.” An encounter with some lawless buffalo skinners has the same sense of misrule and chaos as some of Sheen’s confrontations in Vietnam.

The crazier things get, the more the bond between Kidd and Johanna strengthens. Hanks and Zengel, a relative newcomer, are wonderful together, their relationship growing and evolving as they navigate dangers of every sort, from sex-trafficking to a full-blown dust storm.

Director Paul Greengrass, who’s done everything from the “Bourne” franchise to “United 93,” seems delighted to take us through the so-called Old West. He treats us to sweeping shots of cattle drives and buffalo herds. He shows us vast prairie plateaus, lit by lightning strikes and crimson-hued sunsets. He captures the rustic bustle of a frontier town and honors such well-known tropes as an old-fashioned shoot-out that could’ve taken place in the high country of the Ponderosa.

You can see that Hanks loves the same stuff. While his work with Zengel, is beautiful, you sense where his heart lies. With all the Western-y stuff. With the chance to dismount from a restless horse, to grab a rifle from his saddle, to bounce along in an ancient buckboard wagon. At one point – mid shoot-out, actually – a character who’s trying to kill Hanks notes admiringly, “You’re good for a man of years.”

He sure is. And he’s made a movie worthy of our time and his talent.