Poster of "No Time to Die"

So, the Bond conglomerate wisely hedged its bets, trusted in the enduring allure of Craig and launched their movie in theaters in fall, 2021.

The lesson learned: always trust in the enduring allure of Daniel Craig.

“No Time to Die,” while acknowledging there will be other Bonds and other Bond movies, works best as a respectful and affectionate farewell to Craig, a remarkable actor who somehow managed to shake up the Bond mythos as effortlessly as all those countless bartenders have shaken (not stirred) our hero’s everlasting martini. A scene from “No Time to Die”

The elements are all in place: the exotic locales, the breathtaking action scenes, the beautiful women, the silken villain bent on world domination, the somewhat incomprehensible plot.  And, of course, the Bond team, from prickly M (Ralph Fiennes) to fastidious Q (Ben Whishaw).

Still, there are a few tweaks – like the traditional pre-credit sequence, which eschews the bombastic action of earlier films and focuses on a little girl trying to escape a villain wearing a half-Kabuki, half “Phantom of the Opera” mask.

The little girl grows up to be Madeleine Swann (Lea Seydoux), now 007’s One True Love.  They are sharing an idyllic secret get-away in Italy when Bond’s old nemesis, SPECTRE, rears its ugly head. Could they have been tipped off, by, well, Madeleine?

Cut to five years later. Bond has ostensibly retired, but just like Al Pacino’s Michael Corleone, just when he thought he was out… 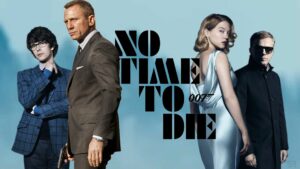 Movie poster of “No Time to Die”

At the behest of his old CIA chum, Felix Leiter (Jeffrey Wright), Bond gets back in harness to foil the dastardly schemes of Lyutsifir Safin (Oscar-winner Rami Malek).  En route to the incomprehensible but action-packed finale on a “Thunderball”-ish remote island, Bond encounters new friends (a slinky and engaging Ana de Armas) and old enemies (Christoph Waltz in full Hannibal Lector mufti as Ernst Blofeld).

It all goes on too long (163 minutes), as if the Bond team was as reluctant to let go of Craig as the rest of us are. But that’s pretty much the point of “No Time to Die” – not the further adventures of James Bond so much as a fond farewell to an actor who managed the seemingly impossible task of not only (almost) erasing the iconic shadow of Sean Connery but also re-inventing an embarrassingly dated character for a new era.

Mr. Craig…thank you for your service. Mr. Bond…see you again soon.

“No Time to Die” is in movie theaters, and it is available on streaming services.