A scene from "Nobody" - an action-packed thriller

It’s a little weird to start a review with a major Spoiler Alert, but…SPOILER ALERT:

Okay, you’ve been warned, so here goes. Early on, “Nobody” is as misleading as its milquetoast title. In the opening scene, we’re introduced to a beaten-up Bob Odenkirk, better known as the star of “Better Call Saul,” the hugely successful series spun off of “Breaking Bad.” Asked by the police just who he is, he mumbles, “Nobody.” 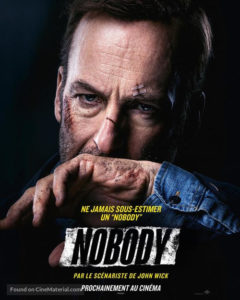 Actually, he’s Hutch Mansell, an apparently mild-mannered family guy whose life has been reduced to a soul-deadening routine: Morning coffee, missing the garbage truck by seconds, saying goodbye to his indifferent family, punching into his humdrum job. (The daily dullness is conveyed in a brilliantly-edited montage). His neighbor preens over his newly-acquired classic muscle car, a ’72 Dodge Charger.  Hutch preens over…nothing.

Then one night, two armed burglars break into his house. Hutch manages to get the drop on one of them, but instead of swinging the nine-iron in his hands at the robber’s head, he lets the pair go. And thus becomes a laughingstock – someone not “man” enough to protect his family. Even the cops snicker at him.

But you know what they say about sleeping dogs. One of the thieves has taken his little girl’s kitty-cat bracelet, and when Hutch uncharacteristically takes off to retrieve it himself, well, we’re taken, too. Right into “Taken” territory. Turns out that Hutch isn’t quite the wimp we’ve been led to believe he is.

What works about “Nobody” is, well, just about everything. This is what mindless blood-soaked action-packed escapism should be – energetic in the extreme and a touch more clever than you’d expect.

A mash-up in a city bus is scored to “I’ve Gotta Be Me,” sung by ‘50s crooner and Sinatra-wannabe, Steve Lawrence (as in, Eydie Gorme). Similarly, when Hutch has to turn his house into a home-grown inferno, we hear Louis Armstrong’s inimitable “What a Wonderful World” as the place goes up in flames. 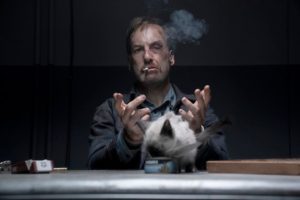 A scene from “Nobody” – an action-packed thriller

The film features a reliable villain, a sadistic enforcer (Aleksey Serebryakov) for the Russian Mob. But like the rest of the movie, he’s not just a by-the-numbers psycho. He likes to perform karaoke and when he orders his goons after Hutch, he steps straight into one of their cars, like Trump stepping into the Presidential helicopter. It’s right where he wants it to be because, well, it’s what he wants. And he is very used to getting what he wants.

Serebryakov is quite good, as are Christopher Lloyd and RZA (rapper Robert Fitzgerald Diggs) who turn up as Hutch’s allies. And an over-the-top finale in a booby-trapped warehouse is as crazy-silly as it is infinitely satisfying.

Still, it’s Odenkirk who holds the whole thing together. He’s funny and low-key, yet believably bad-assed when he needs to be. Mostly, he’s just an enormously talented actor who instinctively makes risky choices and pulls them off. It’s thanks to “Nobody” that I discovered the pleasures of “Better Call Saul.”

Never mind stuff like the “Fast and Furious” movies. If you want to dip your toe into the hopped-up wet dream that is Hollywood mayhem as it should be, here’s your chance to see what all the fuss is all about.

“Nobody” currently is showing in metro theaters, and it also is available to rent.