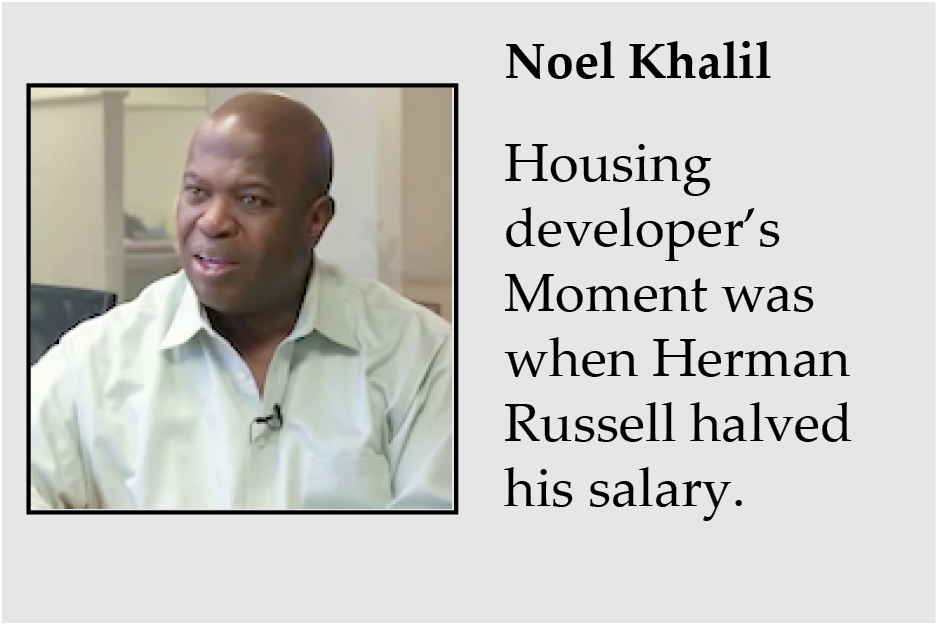 When Noel Khalil moved to Atlanta in 1983, chasing development deals on the affluent north side of Atlanta seemed as natural to him as it was unusual to the white men who dominated the industry in that part of town.

“I’d walk into meetings to negotiate the purchase of a million dollars worth of land and everyone would stop talking and look at me,” he said. “They didn’t know who I was, but everything loosened up when I started talking and they realized I knew the technical aspects of the business. And then, when I brought out the checkbook, it went smoothly. In Atlanta, money helps.”

Having observed his Jamaican-born parents supplement their income through residential and commercial real estate properties while growing up in the Bronx in New York, Noel thought he’d follow in their footsteps. After doing graduate work in city planning at Georgia Tech and earning a law degree from Florida State, he worked for U.S. Home Corporation building apartment complexes in Houston and New Jersey before being transferred to Atlanta.

After closing a few deals in the northern suburban counties of Atlanta, Noel was surprised when the secretary of Atlanta’s most prominent African-American developer called to say her boss, Herman Russell, wanted Noel come to his office for a meeting.

As Khalil recalls, “He got right to the bottom line and said, ‘I heard good things about you. I heard that you are a talented developer and I want to do market-rate development. Would you like to help me get a company going?’ I said, ‘Yes, I would.’ ”

What surprised Noel even more was when Herman offered to pay him half of his $60,000 salary he was earning at U.S. Home. “I’m just gonna pay you enough so that you won’t starve but that you’ll be so hungry that you’ll wake up every morning trying to make this company work. And if you are worth half of what you say you are worth, then you’ll make that and much more over time,’ ” Herman told him.

“And it really did serve as a motivation factor for me,” Noel said. “I’m convinced if he had paid me that $60,000, I don’t know if I would have been as highly motivated as I was when I was hungry.”

When a recession hit in the early 1990s, Noel left to start his own firm that today is called Columbia Residential and is one of the nation’s leading quality affordable housing developers, employing more than 200 people. The firm made Atlanta headlines in January when it bought downtown’s 102-year-old Imperial Hotel with plans to renovate it as a showcase for mixed-income residents.

Columbia has developed high-profile communities throughout Atlanta and across Georgia, Texas and Louisiana. Its highest profile community, Columbia Parc, was built in the politically charged atmosphere of New Orleans following the devastation of Hurricane Katrina. In 2010, President and Mrs. Obama and HUD Secretary Shaun Donovan made a highly publicized visit to Columbia Parc and praised it as a leading example of affordable housing.

Through it all, Noel remembers the lessons he learned from Herman, recalling one day when the two of them were walking down the street and Herman saw a penny on the ground. “He stopped, leaned down, picked it up and said, ‘Khalil, look how God has blessed me today!’ ”

Khalil has guided his own firm through growth periods and lean recessions with a sharp eye on expenses and the bottom line. And he credits his time working with Herman: “It has boded well for me in the 21 years of having Columbia Residential … In learning that you have to be thrifty, that there will be bad days. Don’t live beyond your means.”

Next week in Moments: John Pruitt, longtime Atlanta TV anchor, who made the NBC Nightly News his first week on the job.

Faced with a time crunch, city could cut COVID-19 housing fund in half