Despite some ingenious touches and a nod or two to the history of movie-making, Peele’s third movie is an incoherent, chaotic disappointment.  His glorious debut “Get Out” suggested he might be the next Hitchcock.

But “Nope” brings up fears that he might be the next M. Night Shyamalan, who also knocked it out of the park with “The Sixth Sense,” but never got his groove back, so to speak.

Shyamalan’s third major feature was a disaster called “Signs” about a widowed farmer (Mel Gibson, pre-banishment) who encounters an alien invasion. Not friendly, finger-touching Spielberg-ian aliens like E.T., but nasty ill-intentioned ‘50s-era ones like the bulbous-headed extraterrestrials in, say, “Invasion of the Saucer Men.”

“Signs” was so poorly put together that you kept expecting there to be some sort of reveal. Like, Gibson was a mental patient experiencing hallucinations (hmm) or maybe it was a treatise on the distorting side-effects of a widower’s isolation and grief. A scene from “Nope” – the latest movie by director Jordan Peele

“Signs” was about an alien encounter that was about as convincing as poor Mel’s mea culpas after his infamous drunken run-in with the cops.

“Nope” is somewhat better than “Signs” because Peele loads it with distracting subplots.  It’s as if he picked up an obscure history of Hollywood and thought, gee, this is interesting and so is this and this and…

The main story takes place at a California horse ranch owned by the reclusive OJ (Daniel Kaluuya) and his more out-going sister, Emerald (Keke Palmer). That there’s considerably less demand for horses in Hollywood these days is the least of their problems. To begin with, there’s the otherworldly death of their dad (Keith David), literally cut down by pennies from heaven (well, it’s a cloudburst of lethal coins).

Then there’s the strange cloud on the back forty that just won’t move. And something weird is going on at the third-rate faux Old West town next door, run by a former child star (Steven Yeun).

The truth is out there, but the siblings are less interested in what that might be than in getting the so-called “money shot” (or, as they amusingly dub it, “the Oprah shot”) they can sell to the right media outlet. To that end, they enlist the help of a techno-nerd (Brandon Perea) who works for an electronics shop and a veteran Old School cameraman (Michael Wincott).

Peele is fascinated by bits and pieces of Hollywood ephemera. Such as the chimp star of a ‘90s sitcom going nuts on-set and wiping out most of the cast while an applause sign blinks forlornly in the background. Or the seldom-noticed factoid that the jockey in Eadweard Muybridge’s famed early motion-picture footage “The Horse in Motion” is Black (and, in this film’s history, the great-great-great grandfather of OJ and Emerald). 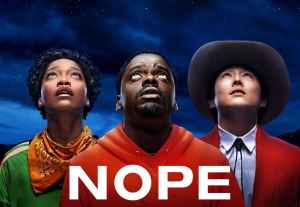 A movie poster of “Nope”

Any one of these stories might’ve made a fascinating film, but Peele refuses to commit to anything aside from his rather pedestrian “Watch the skies” saucer movie. And yes, the alien spaceship really does look like a flying saucer.

Kaluuya who was unforgettable in “Get Out” and recently won a much-deserved Oscar for “Judas and the Black Messiah,” holds “Nope” together with his commanding presence and charismatic underplaying. Palmer, alas, is mostly annoying and, in her own way, as unfocused as the film.  And Yeun, a former “Walking Dead” star and Oscar nominee for “Minari,” isn’t given nearly enough to do.

Peele seems less a one-hit wonder than someone who’s gone temporarily off-track. Which may be the scariest thing about “Nope.”

When a character says of someone, “His ex booked a pilot on the CW,” you wonder if Peele has been hanging around Hollywood too long himself and could use some fresh air. Or at least some air untouched by deal-making brunches and private screening rooms.