The optics were not good.

Norfolk Southern, Atlanta’s newest Fortune 500 company, was bulldozing on the land that once housed the Chattahoochee Brick Co., a company that manufactured millions of bricks that helped in the building of Atlanta by using convict labor, and many workers died on the site. That history came to light in 2009 in the Pulitzer Prize-winning book – “Slavery by Another Name” – Doug Blackmon.

The land currently is owned by Lincoln Energy Solutions, which planned to build a fuel terminal with mega oil tanks, but it ran into community and city government opposition. Lincoln was denied permits to build out the fuel terminal, so it filed a lawsuit in 2016. But for unexplained reasons, it withdrew its lawsuit one week before the hearing was scheduled. 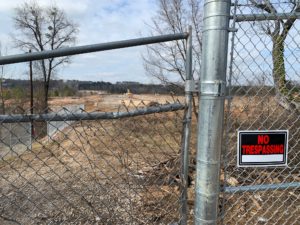 The community found out last year that Lincoln had leased the 75-acre site to Norfolk Southern, which has special development powers awarded to railroads. It appeared Norfolk Southern would be able to develop the property into a rail transfer facility without having to go through all the regulatory hurdles.

Needless to say, residents in nearby communities felt Lincoln and Norfolk Southern had done an “end run” to develop the project despite widespread opposition.

A community protest was held Feb. 9 with several of Atlanta’s best-known activists, including Derrick Boazman, a former Atlanta City Councilman.

“This is a crime scene,” Boazman said about the horrendous history of Chattahoochee Brick while announcing a “Stop Norfolk Southern Coalition” that includes the Concerned Black Clergy, the Rainbow Coalition and NAACP.

“What is happening here is an injustice, and economic injustice because Norfolk Southern is benefiting from our tax money to do this,” said Vincent Fort, a former state Senator, of the local tax breaks Norfolk Southern had received to move its headquarters to Atlanta from Norfolk, Va. “More than anything else, it is a moral injustice. We cannot say that Black lives matter and allow Norfolk Southern to build on the bodies of Black men.”

The optics looked bad for Norfolk Southern. The company, which is building its headquarters in a new tower in Midtown, prides itself on being a good corporate citizen. 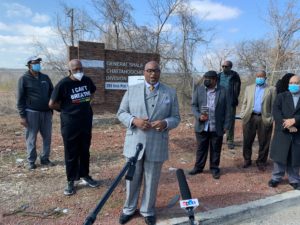 Three days after the protest, Atlanta Mayor Keisha Lance Bottoms issued a statement saying she was “seeking to stop development of a fuel terminal” by filing for a preliminary injunction with the Surface Transportation Board, which regulates railroads.

“Our Administration will do everything it can to protect the sanctity and significance of this property,” Bottoms said in a news release. “A site of such historic and environmental importance needs careful consideration before even limited development occurs.”

On Saturday, Norfolk Southern issued its own statement. It said it “will stop work on the site immediately while we engage in further discussions with the City.” (See the full statements from the city and Norfolk Southern below).

We now have an opportunity for a reset.

It sits at the confluence of Proctor Creek and the Chattahoochee River inside I-285 near Bolton Road. For years, community leaders and environmental organizations have wanted the property to be part of a Chattahoochee River Park. The idea gained traction when the city did a master plan on how the river could become a public amenity with multiuse trails running along the river. The city even tried unsuccessfully to buy the Chattahoochee Brick land.

Doug Blackmon, author of “Slavery by Another Name,” also believes we need to preserve the site as a historical reminder of one of Atlanta’s ugliest past. Blackmon describe the site as a place where “people were starved to death, worked to death and whipped to death” while working as free prison labor. The plant originally was built by James English, who served as Atlanta’s mayor from 1881 to 1883. 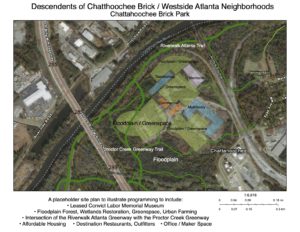 A community-driven alternative plan for the redevelopment of the Chattahoochee Brick property into a park (Special: Keith Sharp of Riverwalk Atlanta)

“There’s no doubt a substantial number of people died at Chattahoochee Brick and were buried there,” said Blackmon, who would like Norfolk Southern to be transparent in any archeological studies that it conducts on the property. “But it doesn’t really matter whether there are bones in the ground. We need to remember places where horrifying things were done by other human beings. We need to remember that even if there are no bones in the ground.”

Jeff DeGraff, manager of media relations for Norfolk Southern, said the railroad plans to build a memorial to acknowledge the site’s history.

“We were aware of some of the issues with the site,” DeGraff said in an interview before the company decided to stop work on the project. “The parcel itself is uniquely situated for us. It’s adjacent to our main line. It is already in an industrial area. It’s sitting vacant. It’s being adjacent to I-285 is ideal.”

Norfolk Southern was planning to develop the property as transfer facility to better serve its customers, including Lincoln. It also expected to expand services to other customers who would offload their products, such as other commodities, on the site. 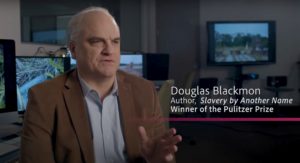 “We can assure you that this is a Norfolk Southern project to benefit our customers,” DeGraff said. “This is an opportunity for us. This is not an end run around.”

But the site is also an opportunity for Atlanta to be reimagined in a new way – much as the Atlanta BeltLine is transforming a circular rail corridor into one of the most successful urban redevelopment initiatives in the country.

“From my perspective, the historical and environmental issues are real,” Blackmon said. “We have an obligation to acknowledge what happened. This should be a time for Atlanta to have an open conversation of what this place means in our history. These ugly things in the past are central to our story of how our city became a great city. This place was central to the creation of modern Atlanta.”

I do not know whether there’s the possibility to find a middle ground between Norfolk Southern’s desire to build a transfer facility and the vision to create a Chattahoochee River Park on land that would also include a significant historical memorial detailing what happened on the site.

But I do know the Chattahoochee Brick property gives Norfolk Southern an opportunity to demonstrate whether it will be a model corporate citizen in Atlanta.

ATLANTA—The City of Atlanta filed a Petition for Preliminary Injunction with the Surface Transportation Board seeking to stop development of a fuel terminal on a property that was the former location of the Chattahoochee Brick Company. This property is located on the Chattahoochee River just north and west of Bolton Road.

“Our Administration will do everything it can to protect the sanctity and significance of this property,” said Mayor Keisha Lance Bottoms. “A site of such historic and environmental importance needs careful consideration before even limited development occurs.”

The Chattahoochee Brick Company was owned by former Atlanta Mayor James W. English. The brick company, which supplied material for the construction of houses and buildings in Atlanta, used leased “convict” labor in its manufacturing processes, working primarily African American men under terrible conditions – some even to their death in furtherance of this enterprise. It is widely believed makeshift graves were created on the site – of which likely remain to this day.

Additionally, this property is on the Chattahoochee River – Atlanta’s and the larger region’s supply of drinking water for which great success has been achieved improving water quality.

The Surface Transportation Board is an independent federal agency which primarily regulates railroads. The City of Atlanta is challenging the development of the fuel terminal on a variety of regulatory grounds.

We share the Mayor’s view of the historical significance of this site and recognize that any entity seeking to develop it takes on a special responsibility to do so in a socially and environmentally responsible way. That’s why we will stop work on the site immediately while we engage in further discussions with the City. Throughout this process, we have worked closely with local officials and held multiple meetings to listen to the concerns of community stakeholders.  We have committed to build a memorial to ensure the atrocities committed at the site are never forgotten. We are abiding by all applicable regulations and are conducting extensive clean-up of the site.  We support the vision of many in the community for a network of trails along the Chattahoochee.  In addition to the environmental reviews associated with cleaning up the site, we have engaged experts to perform an archeological and historical survey, as well as archaeological excavation in certain areas.  There has been no evidence of a cemetery on the site, but given the tragic legacy of the site, we have continued to exercise great care.