Norfolk Southern’s Jim Squires: ‘Atlanta had a positive vibe for me’

Atlanta has a new civic player in town.

As Norfolk Southern cuts the ribbon on its new Midtown headquarters Wednesday morning, the railroad company is solidifying its base in Atlanta by consolidating its executive team with its operations hub.

In his first sit-down interview in Atlanta, James “Jim” A. Squires, Norfolk Southern’s chairman, president and CEO traced the history of the company’s decision three years ago to move its headquarters from Norfolk, Virginia to Atlanta.

“I always have had a very positive feeling personally about the city,” Squires told SaportaReport on the eve of the ribbon-cutting. “I like its energy. I like its diversity.  I like its amenities. Atlanta had a positive vibe for me, and it always felt like the place where we could thrive as kind of a new reinvented Norfolk Southern.” 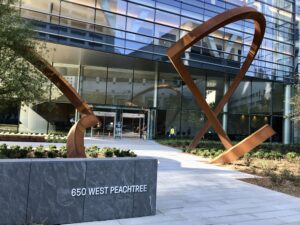 Squires said the seeds for moving to Atlanta were planted when he became CEO of the Fortune 500 company in 2015.

It started with a hostile takeover attempt by Canadian Pacific Railway six months after he became CEO. Both the board and Squires did not feel such a combination would be good for Norfolk Southern, and they did not think the deal would go through for regulatory reasons.

“We resisted the overture, and there ensued about a five-month battle for control of the company. Ultimately, the regulators stepped in and suggested that they would not approve the merger as proposed,” Squires said. “It was a wake-up call for our board and for me. From that time on, I felt that the company needed to change ways.”

Other factors were in play, though. The business was changing from being heavily reliant on the shipment of coal for revenues and profit to one that was more focused on consumer goods.

“Just to put that in context, between 2014 and 2021, our coal volumes were cut in half,” Squires said. “We had to figure out some way to adjust our strategy to account for that loss of what had been a major commodity for us.” 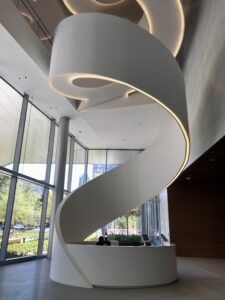 The transition from coal also helped reinforce the environmental benefits of rail for transporting goods as compared to truck or air. Railroads are the most fuel-efficient mode of transportation.

Another factor was the company realized it was not diversifying its senior management ranks with women and minorities despite many years of trying.

“The board and I felt we needed change,” said Squires, explaining the move. “It was partly to ensure that we remained in control of the company and did not face another hostile takeover situation; partly because we needed to pivot to a different business strategy to grow our top line and replace the loss of coal. And third, because we knew we needed to have a more diverse management team. All three of those things ultimately led us to Atlanta.”

Norfolk Southern was born through the merger of Roanoke-based Norfolk & Western and Atlanta-based Southern Railway on June 1, 1982. Norfolk, Va., was selected to be the headquarters of the merged railroad with its top executives and back-office functions, but the railroad’s operations center and information technology division were based in Atlanta, which had more company employees than the Virginia location.

Today, Norfolk Southern has about $11 billion in revenues and19,000 employees working in 22 states and the District of Columbia. About 4,000 employees are in Georgia, of which 3,000 have offices at 650 West Peachtree — the site of the new headquarters with a 17-story south tower and a slightly lower north tower. 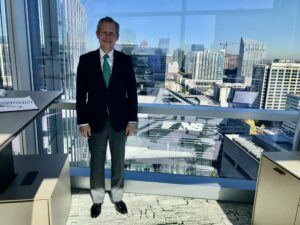 Squires’ office is a sun-filled window-lined perch on the 17th floor where he stands at a desk that can be adjusted if he wants to sit. The new headquarters is modern, full of light with collaborative spaces. The common area floor has a pool table, a ping-pong table and other amenities for employees. The company’s move to Atlanta, near Georgia Tech, was partly to compete for talent — and the competition is not with other railroad companies but with technology firms, like Google or Amazon.

Despite its modern decor, the headquarters has several elements linking it to the past. The floors of its elevators have the symbols of railroads that are part of Norfolk Southern’s legacy. Near the food court area, there are large signs of the two signature railroads that led to the formation of the company. It’s all part of an effort to look to the future while respecting the company’s past.

For Squires, the move to Atlanta also is an opportunity for both the company and himself to become integrally involved in the community.

“I was introduced to the ‘Atlanta Way’ by two prominent Atlanta businessmen who served on our board — Pete Correll and Tom Bell,” Squires said. “Those two have personified the Atlanta Way, the deep integration of the business community in the civic life of the city. And they extol the virtue of that model. As I was coming up, I got to know them, and I got to know the city and the ‘Atlanta Way.’” 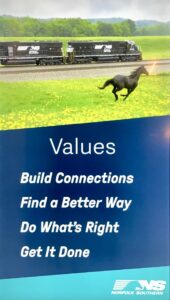 Norfolk Southern’s values are on display on electronic message boards throughout the new headquarters. (Photo by Maria Saporta.)

Bell, the retired CEO of Cousins Properties, is still on Norfolk Southern’s board. Correll, who passed away earlier this year, was the retired CEO of Georgia Pacific. Both Correll and Bell are given credit for leading the effort that saved and rejuvenated Grady Hospital.

Squires said Norfolk Southern has a culture of community engagement with business leaders “deeply committed to the communities in which they served.” Squires said the company is made up of people who feel a “deep sense of civic obligation.”

Since he has been in Atlanta, he and his wife, Karen Jones Squires, have set up a donor-advised fund with the Community Foundation for Greater Atlanta, where they have been investing in smaller nonprofits led by Black women in particular.

Squires also serves on the boards of the Atlanta Committee for Progress and the Piedmont Park Conservancy. Now empty nesters (the parents of two adult daughters), Jim and Karen live in a Midtown high rise that’s within walking distance of the new headquarters. “It is a great walkable lifestyle,” Squires said.

Norfolk Southern has been in the news locally on two separate projects. In May, the railroad abandoned plans to build a rail transfer facility on the land that used to be the Chattahoochee Brick Co. when the project was opposed by the City of Atlanta, the environmental community and surrounding neighborhoods in northwest Atlanta.

More recently, MARTA said it may have to give up on its plans to build commuter rail through Clayton County because Norfolk Southern was unwilling to permit passenger trains on its rail corridor.

“We do host passenger trains on Norfolk Southern’s rails. We are open to such partnerships,” Squires said, but then he quickly added the railroad is protective of its own freight operations. “Our approach is to be open and engaged and see if we can work something out if there is adequate provision for future capacity. We have done deals like that in Virginia and elsewhere.” 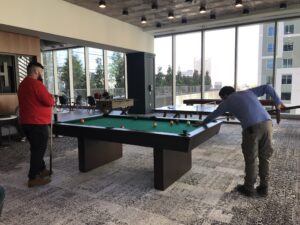 A couple of Norfolk Southern employees play a game of pool at the company’s new headquarters. (Photo by Maria Saporta.)

Squires, however, is particularly pleased that the bill could accelerate the shift of freight from trucks to rail, which is positive for the environment and for highway safety. Investments in rail corridors also will help Norfolk Southern in its transition from hauling coal and commodities to moving more consumer goods.

“For us to be successful, we have to compete with trucks and offer reliable and timely transportation services,” Squires said, adding that the railroad continues to invest capital dollars on its core assets, including its rail corridors and technology.

When asked how long he intends to work as CEO, Squires, 60, said he serves at the pleasure of the board. He continues to lead the railroad’s efforts to shift from coal to being more “consumer-facing,” while maintaining the company’s profitability.

When he was in college, Squires did not envision becoming a CEO. A native of Hollis, N.H., he went to Amherst College where he majored in ancient Greek.

“I set out to be a classics professor,” Squires said. “I completed my Greek major, but I became very interested in the Japanese language and culture, and I moved to Japan after college. I guess you could say my early career was, was characterized by a variety of unexpected twists and turns.” 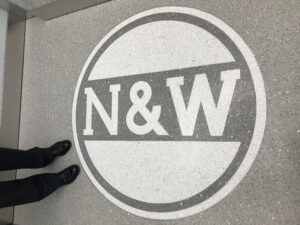 All the elevators in the new headquarters building feature logos of the railroads that have been absorbed by Norfolk Southern. (Photo by Maria Saporta.)

After completing a yearlong fellowship in Kyoto, Japan at Doshisha University, Squires enlisted in the U.S. Army, expecting to work in the American embassy in Japan. Instead, he ended up at Fort Bragg, where he was assigned to a psychological operations battalion organized around an Asian theater of operations. That’s where he met his wife, who was involved in civilian intelligence.

“We had so much in common, which is why we are still married 34 years later,” Squires said. “She loved to travel. In fact, she’s in France as we speak, pursuing her French language studies.”

After the army, Squires decided to go to the University of Chicago to get a law degree, thinking he would work internationally to take advantage of his 10 years studying Japanese. He did come close to accepting a position with a Japanese law firm.

“But along the way, I discovered the Norfolk Southern law department through a very random contact in the placement office of the law school,” Squires said. “That sounds interesting. It’s totally different. My father was a train buff and had model trains. When he was a boy growing up in a small town in New Hampshire, he would go see the steam trains.”

When asked if as a new corporate citizen in Atlanta he felt a sense of responsibility to be an active community leader, Squires was quick to respond.

“Yes, oh definitely,” Squires said. “That’s definitely important to me and to our mission here.” 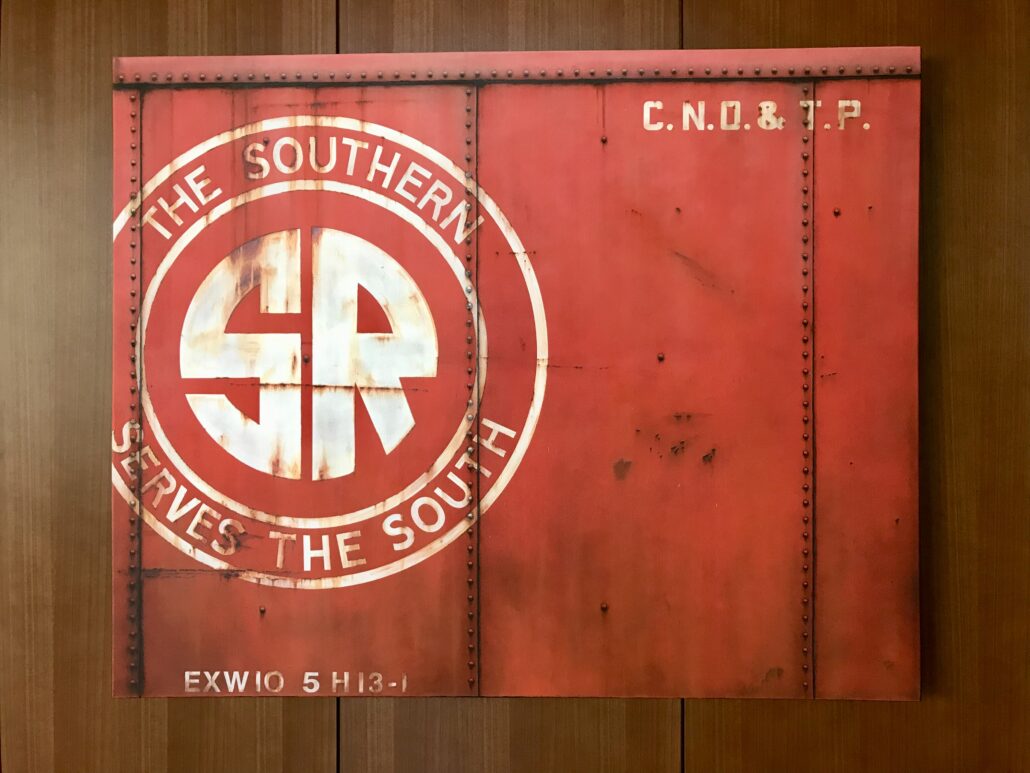 A sign displays the logo of Atlanta-based Southern Railway that merged with Norfolk Southern in 1980. (Photo by Maria Saporta.)

Previous Article
At COP26, talks abound of nuclear plants as big as Plant Vogtle
Next Article
‘Tis the Season for Wellness