For some odd reason, the folks in North Carolina think they are able to build a deep water port that could rival Charleston or Savannah for the massive vessels expected to sail through the expanded Panama Canal.

This possible port development is barely mentioned in Georgia, where the public discourse is of competition between Charleston and Savannah. Sometimes there’s a nod to a potential ocean port in Jasper County, S.C., which could complement the Savannah port along the shared river.

Yet North Carolina bears watching – the state is a fierce contender that already is a regional leader in areas including scientific research and development, banking and finance, transit and tourism. 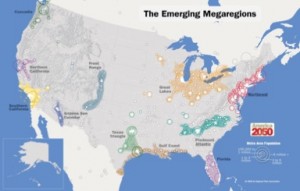 In addition, Raleigh is to anchor the northern end of the megaregion dubbed the Piedmont Atlantic. This sprawling population center is expected to form over the coming decades, with Birmingham at its southern tip. Atlanta and Charlotte will be major urban areas in the center of the region.

The North Carolina ports now do not have the connectivity to transport a major portion of goods to the population centers of this megaregion, according to the study. Indeed, much of the North Carolina market now is served by the ports near Norfolk, Va., the study showed. Better networks of road and rail would have to be established to deliver goods to and from an expanded North Carolina port.

Georgia faces a similar problem, according to the Georgia Department of Transportation’s recently released freight study. The system of roads and rail that delivers goods to and from Savannah’s port need to be expanded, the study showed.

Nonetheless, North Carolina’s state government and business leaders have both the tools and wherewithal to establish the capacity of rails and highways to get product to and from the state’s seaports.

For instance, the North Carolina draft study determined that Wilmington’s potential port development could be enhanced by related projects including expanding the airport to handle jumbo planes; adding rail track to connect to existing rail junctions in Fayetteville and Raleigh; and increasing the number of cruise ships that use the port.

The North Carolina draft study looked into six potential ports and determined that four are viable candidates for development.

Three sites are near Wilmington, along the Cape Fear River. The fourth is near Morehead City. Two sites along the Neuse River were dismissed as economically unfeasible.

Wilmington now is a major seaport that developed as the steamship era replaced sail, making it feasible to transport ladened vessels up river.

Wilmington’s port handles less cargo than Savannah, but it is of a similar type – container cargo, break bulk, and bulk. Container cargo is that which is transported in the types of trailers that can be towed by a truck on a road. Break bulk is transported on pallets, boxes or bails. Bulk is loose material that can be shoveled, scooped or conveyed by a belt into a cargo hold.

Savannah, in addition to these types of cargo, handles refrigerated cargo and containers that can be rolled on and rolled off a vessel.

Morehead City is not a likely candidate for expansion to handle the larger vessels expected through the enlarged Panama Canal, according to the draft study. The port is almost deep enough even today, but trucks and trains have difficulties reaching the port, the study found.

The Morehead City port is served by roads that handle a tremendous amount of beach-bound tourism traffic, in addition to all the traffic heading to the ferry that connects the mainland with the Ocracoke, the southernmost village on the Outer Banks. The train track that serves the port runs down the middle of this divided road.

The two sites that were discarded are along the Neuse River. The Neuse helps form the Pamlico Sound, which is the body of water that’s separated from the Atlantic Ocean by the Outer Banks. These two sites were found to be too costly to build because of the massive dredging required to connect them to the ocean. 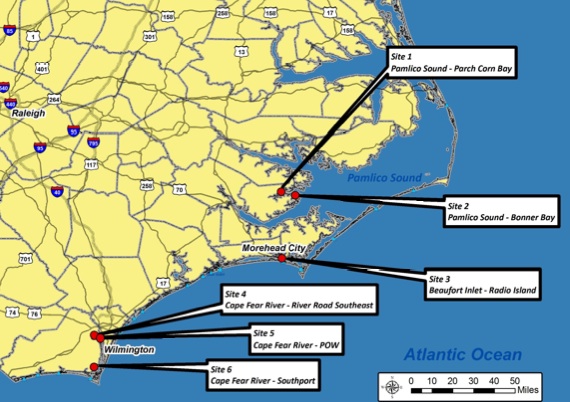 North Carolina’s port development study identified six sites that could be developed as harbors deep enough to accommodate large vessels. Sites 1 and 2, on the Neuse River near the center of this map, have been dismissed as unfeasible because of the cost of dredging. Credit: North Carolina Maritime Strategy.