In debates between four Georgia Republicans still in the running to represent two ultra-conservative north Georgia districts in Congress, conservative credentials, COVID-19 and President Donald Trump got the most attention.

Despite record-high unemployment, a recession and a possibility of schools’ doors being closed, these debates weren’t about the economy or education.

Republican Matt Gurtler repeats often that he’s the “most conservative” legislator in Georgia’s state House, and it’s hard to imagine anybody would quibble with him on it. He’s looking to bring that to Washington D.C. from northeast Georgia’s deep-red 9th Congressional District.

In the first round of primary voting, Gurtler’s 21% of the Republican primary vote gave him a first-place finish in a field of nine Republicans. He beat more centrist folk like state Reps. Kevin Tanner and John Wilkinson. And Gurtler also beat former congressman Paul Broun, no slouch on conservatism himself.

But it wasn’t enough to win outright. In the runoff, Gurtler faces second-place finisher Andrew Clyde, who got about 18% of the vote.

Clyde owns a pair of gun shops, supplies related items to the federal government, and is running in part on his record of having gotten the IRS to change a policy on asset seizures. He’s now campaigning to dismantle the agency.

Both Gurtler and Clyde said they support building a wall on the U.S.-Mexico border. Both said they agreed with Gov. Brian Kemp’s handling of COVID-19 and that pandemic decisions must be made in accordance with the U.S. Constitution — no shredding of or exceptions to it because of a pandemic. Both said they back law enforcement.

A lot of the difference here may come down to biography — and to ground game.

Gurtler, elected to the state House in 2016 just four years out of college, said he has never compromised in the “meat grinder” or “pressure cooker” of the state Capitol, but predicted Clyde would.

“I’ve been fighting the establishment for four years …” Gurtler said. “To get our country back in order, we have to lead by example I’ve done that, I’ll continue to do that.”

And Clyde, a 28-year U.S. Navy veteran, said he knows about government even if it’s not from a legislator’s seat.

“I think that business experience and my military experience, my combat experience, has taught me many lessons in life that are very valuable in making good and wise decisions,” Clyde said. 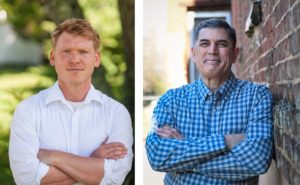 Besides that, he was an advocate for years to push a law named in part for him that bans the IRS from seizing assets in certain cases unless or until law enforcement have better reason to believe those assets have to do with a crime.

Gurtler had collected about $522,000 in the same time. All but a $7,000 loan to his own campaign came from individual or committee contributions.

The two Democrats in the runoff both hew a little closer to the party’s line. Both Devin Pandy and Brooke Siskin want to expand public support of health care. Pandy called on Kemp to immediately expand Medicaid; and he said Congress needs to send another round of stimulus checks to families. Siskin said health care is a right, and public programs need to help more people.

Pandy said he’s the one who has a chance winning in a red district. “My deployments have led me to a place where I have actually liaisoned with foreign governments. I have a leadership experience of over 20 years leading troops on the battlefield and also supervising in in a corporate structure,” he said.

Siskin pointed to her life experience as well: “I have experience when it comes to real world experience, dealing with it as a single mom, as a survivor of domestic violence, as a person that can deal with the groups of people that are out there needing a voice in Washington,” she said.

But money isn’t on their side. Siskin has reported no fundraising at all to the federal government and Pandy reports having raised about $19,000.

On the other end of the state’s mountain ranges, in northwest Georgia’s Congressional District 14, the two Republicans in the runoff each claim they’ll be the true Trump ally.

Construction company owner Marjorie Taylor Greene came within 10 points of a first-round win against eight other Republicans. But not quite. So she now faces neurosurgeon John Cowan, who finished with 21 percent of the vote.

The debate started with a reporter asking Greene to respond to U.S. House Republican leadership’s condemnation of her, after POLITICO brought attention to videos of her making racist, Islamophobic and anti-Semitic statements.

Greene first said that the national media has been shoving the “Russian collusion conspiracy lie” down Americans’ throats for three and a half years and that Americans are aware of a “deep state conspiracy.” As for racism, she said, “if you are unapologetically conservative like I am, you’re going to see people like me called a racist even when it’s very unwarranted.”
Asked if she follows QAnon, an internet conspiracy theory that claims anti-American bureaucrats are sabotaging President Trump, she her allegiance is committed to the United States of America.

Cowan hasn’t exactly gotten the national spotlight that Greene’s comments have brought her – except perhaps as the guy that more mainstream Republicans already in office around Georgia and the country are starting to rally around, afraid that Greene isn’t good for the party.

Cowan got an early question about how the president is handling COVID-19. He said that the biggest problem is that liberal Democrats had turned the pandemic into a political issue. He said an upswing in cases is coming, “but it’s something that we can deal with. If we wash our hands, we social distance, and in the appropriate setting wear masks.” 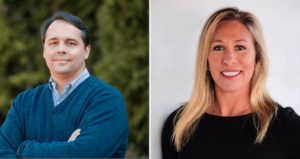 “I’ll be standing, not only beside President Trump but right there with everyone else, working hard to truly save America and stop socialism,” Greene said, to end her appearance.

Cowan ended his appearance with: “I hope that everyone goes and votes August 11, for the true pro-Trump pro-life pro-gun candidate, because I’m all of the conservative and none of the embarrassment. God bless you.”

The winner of the runoff faces Democrat Kevin Van Ausdal, who had a campaign budget of about $19,000 at the end of June.

Previous Article
Socioeconomic Conditions Lead to Health Challenges in Guatemala
Next Article
Resilience During the Pandemic: The Center for Puppetry Arts Continues Its Storytelling Magic