Forty years ago, voters in Cobb, Gwinnett and Clayton counties said “no” to MARTA — and that led to the rail transit system being built in only two counties — Fulton and DeKalb.

Fast forward to 2011. On Wednesday morning, leaders in Cobb, Gwinnett and Fulton held a summit to encourage the development of a regional transit system — especially in the north metro area.

“This is about jobs, jobs, jobs,” said Brandon Beach, president of the North Fulton Chamber who also serves on the board of the Georgia Department of Transportation. “It’s time for us to have transit in the suburbs. It’s not just inside the loop anymore. We can not just have a two-county transit system.”

Leaders in Cobb, Fulton and Gwinnett then unveiled part of their transit vision — which they are calling the “W.” 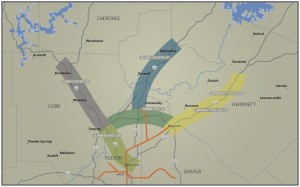 The “W” would be developed in phases, but it would be part of an overall regional vision for transit — serving areas that have become much more urban in the four decades when the chose not to be part of the MARTA system.

Now voters will have a second chance. In 2012, they will have an opportunity to vote for a regional one penny transportation sales tax in the 10-county metro area.

But the significance of these northern jurisdictions having a half-day summit on transit was noted by several people in attendance.

Leithead noted that having leaders in Cobb, North Fulton and Gwinnett “talking about transit wouldn’t have happened” until recently.

“This is a breakthrough moment,” Scott said. “It’s absolutely wonderful. We are seeing how we can connect the region. We are thinking outside our geographic boundaries.”

“This is one of the most exciting meetings I’ve been to in the past three-and-a-half years,” Scott said, but added that it will be particularly import to “get rid of the restriction of the MARTA Act.”

She also referred to the fact that the bill as written will not allow any of the new revenues pay for MARTA’s operating costs — a restriction that does not apply to any of the 119 transit agencies in the state.

“We can’t have differential treatment on the biggest transit system in our region,” Scott said. “We’ve got to get rid of the old stuff and move forward together.”

“We have to get real in our conversation with transit. For transit to be successful, you have to have land use policies to go with it.” Bodker said, adding that those land use policies would have to permit greater density along transit corridors.

Bodker also said that most of the mayors in Fulton and DeKalb counties are seeking assurances that the new tax revenue would be fair to MARTA’s jurisdictions.

Some mayors, who have been paying the MARTA tax, don’t feel they’re adequately served by the system. Then there are others who feel that MARTA is the back-bone for the region’s transit services but that those living outside of Fulton and DeKalb aren’t paying their share.

“We need regional transit,” Bodker said, who also added that “it must be funded by every one who wants transit.”

Previous Article
Corporate campaign contributions would be cut to $250 per candidate every four years if Common Cause prevails in Atlanta
Next Article
Atlanta mayor answers call for campaign finance reform with promise: Airport contracts will be clean, above reproach