Two billion dollars in investments near Northside Drive in downtown Atlanta ought to go a long way toward promoting the rejuvenation of a gritty, five-mile stretch of the road located south of I-75. 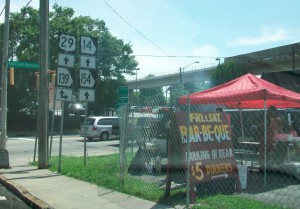 Entrepreneurs, such as the owners of this BBQ stand, have found a way to function despite the confusion of roads that could be reduced if Northside Drive were rerouted on the northern portion of West End, according to a report from Georgia Tech. Credit: David Pendered

A new study from Georgia Tech posits that this investment may catalyze landowners and civic leaders to evolve Northside Drive from a patchwork of low-density uses into a grand transit boulevard – one that links I-75 and I-20 as it passes Atlantic Station, Georgia Tech, new Falcons stadium, the Atlanta University Center and West End – that induces new east-west connectivity.

This $2 billion investment is the low end of the total sum envisioned for the new Falcons stadium and the Georgia MultiModal Passenger Terminal, the still-official and still-tongue-tying name of the transit hub and mixed-use development planned for downtown Atlanta.

The new stadium is a sure thing, as at least $1 billion in financing has been assured by Atlanta and the Falcons, and an opening is planned for the 2017 NFL season. The MMPT is still a question mark, though the master developer is working around the country to find investors for the planned mini-city it’s been authorized to build around MARTA’s Five Points Station. 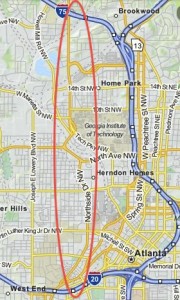 Georgia Tech has produced a redevelopment plan for Northside Drive in the core of Atlanta. This simple map shows Northside Drive running mainly in the red oval, parallel to the Downtown Connector, between I-75 and I-20. Credit: Mapquest/David Pendered

Not included in these figures is whatever amount a private developer may invest at a 6.7-acre site near Atlantic Station, close to the Ikea store. Carter and Assoc. has been authorized by the State Road and Tollway Authority to examine the potential for purchasing and developing a tract the state had purchased for a transit stop but has declared surplus. In addition, Georgia is considering helping Amtrak to relocate its station to this area from its Peachtree Street location.

Taken together, all these investments stand to make Tech’s Northside Drive study more viable than its predecessors. Tech’s report is far from the first such look at Northside Drive. But it does have timing on its side.

The report also calls for a lot of community participation in retooling Northside Drive. This concept goes a long way in this post-recession, Tea Party era, where ideas of transparency and collaboration are so important in winning public approval for projects that require public participation.

Bits and pieces of Tech’s new study have come out since graduate students began their work last autumn and shared it with the community at several points along the way. The students’ work was guided by Mike Dobbins, a professor of practice in the School of City and Regional Planning and a former Atlanta planning commissioner.

This week, the final draft of the executive summary is making the rounds among stakeholders and sponsors. Sponsors include the Georgia Department of Transportation, Atlanta, Georgia Tech, Central Atlanta Progress and Midtown Alliance.

The 43-page report breaks Northside Drive into five components. The first is an overview of the entire segment, from I-75 to West End, located just south of I-20. The four other components are communities located alongside the road.

The full report is so large that it’s provided here in three parts: Part 1, Part 2, and Part 3. 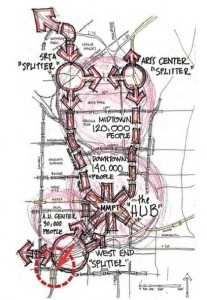 This map, from the Georgia Tech report on Northside Drive, shows the Northside Drive corridor as a spine of a thriving urban core that holds, “the greatest concentrations of people on any given day of any city in the southeast.” Credit: Georgia Tech

Here are a few examples of the new vision for Northside Drive that are contemplated in the report, titled: “Northside Drive as a Multimodal Developmental Corridor: Transformation from Utilitarian Auto Route to Grand Transit Boulevard.”