Consider just one aspect of the challenge facing the Georgia Tech study that aims to retool Northside Drive into an urban boulevard that both anchors and promotes the development of Midtown and Downtown: 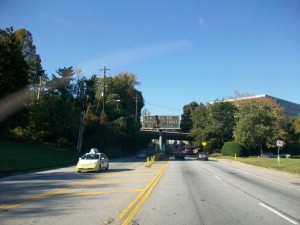 MARTA doesn’t provide regular bus service on Northside between I-75 and I-20, which is the area encompassed by the study. The region’s largest transit system hasn’t identified anywhere along this stretch of Northside that warrants north-south bus service.

That one fact represents many of the challenges for the Tech study. Northside remains a road to destinations that are located away from Northside Drive, rather than as a route to places that are destinations onto themselves.

Consider another aspect of Northside Drive: The main destination that’s advertised on official signs along I-75 near the Northside exit is the Georgia Dome, located miles to the south of the highway.

There’s no signage to other major destinations that are easily accessible from Northside – Atlantic Station, Georgia Tech, the Atlanta University Center, and the neighborhoods west of the Dome that served as an incubator for the nation’s civil rights movement.

Yet, the Northside Drive corridor is a necessary focal point in the continuing effort to renew of Atlanta’s urban core – including efforts to rebuild the area around the downtown Gulch and build a new stadium.

Pioneering developments were already popping up before the recession, including one anchored by a mid-rise apartment building, and a small retail center of the type built in places such as East Atlanta, which were “discovered” before the economic slowdown.

Neighborhoods just to the north of Northside Drive were starting to fill in, as well, as developers identified a market for retrofitted neighborhoods and the fringes of the industrial park between Marietta Boulevard and Northside Drive.

“The reason we’re doing this study is because a whole lot of stuff is happening along this corridor,” Michael Dobbins said Monday during his students’ presentation of ideas for reshaping Northside Drive.

Dobbins is a former Atlanta planning commissioner who now serves as a professor of practice in Georgia Tech’s School of City and Regional Planning. 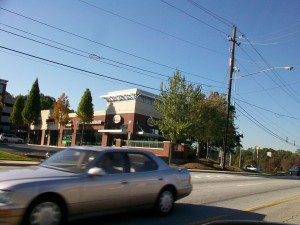 Developers were just starting to add projects to the Northside Drive corridor, such as this retail center near I-75, when the recession arrived. Credit: David Pendered

“The premise of this study is that Northside Drive ought to be able to take up of some of this traffic that now clogs the Downtown Connector and Peachtree,” Dobbins said. “The potential seems positive to add a robust transit link along Northside Drive. The property that fronts on Northside Drive really needs to do that, and can do that, by developing into places where people can live and work and go about their daily activities.”

The students’ presentation began with Margaret Carraher describing the framework of the study. The goal is to bolster the corridor so that it can both handle the pending development and continue to attract growth to the west side of Atlanta’s urban core.

“Northside Drive will have to be widened with bike lanes and provide better pedestrian access,” Carraher said. “There are no sidewalks under some of the rail overpasses. We want to provide transit along Northside Drive: A lot of people live there, and a lot of people work there.”

The study’s timeline calls for its completion by the end of Tech’s fall semester. In the spring, students will seek comments in hopes of improving their work, followed by the formal presentation of findings and recommendations.

“We think we’ve done quite a bit of research, but we also know we don’t know a lot and we’re eager to hear what we’re missing – attitudes and information about where we’re headed and what we’re doing,” Dobbins said.

Meanwhile, for the foreseeable future, transit commuters who do have destinations along Northside will continue to get there via cross-town buses from MARTA stations served by the rail line or buses that run along Peachtree.

Previous Article
Georgia Trust unveils its 2013 list of “Places in Peril” across the state
Next Article
Column: Study shows that Georgia manufacturers don’t use R&D credits