Atlanta’s historic Oakland Cemetery embarks this week on a tricky next step in its comprehensive effort to preserve decaying mausoleums.

Expert preservationists will examine two mausoleums that are in dire straits. One structure is held together with metal bands, and the other is shedding sheets and chunks of its stone skin.

“The materials in these are limestone and sandstone, and they have been melting over time,” said David Moore, Oakland’s executive director. 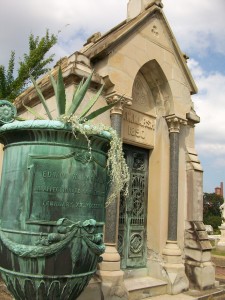 The Marsh Mausoleum looks to be sturdy, but ... Credit: David Pendered

Oakland has determined that 37 of its 55 mausoleums are in need of significant restoration. The majority of that work can be handled in house, by the team led by Dustin Hornsby, the cemetery’s restoration manager.

Hornsby said the damage at the two mausoleums – one for the Marsh family and one for the Jones family – is such that he supports the idea of bringing in some specialists.

Preservationists from the non-profit Chicora Foundation, in Columbia, S.C., are to arrive mid week. Chicora was formed in 1983, according to its website, and the organization specializes in heritage preservation in the Southeast.

The Chicora folks are to document the state of disrepair and devise a restoration process that Oakland can afford, Moore said.

“The damage is of a nature that we want to get as much observation and analysis as possible, by the restoration folks, on what needs to be done and how much needs to be spent,” Moore said. 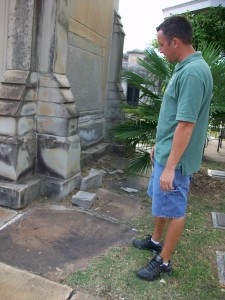 Oakland Cemetery is using federal money to help pay for the restoration of 37 mausoleums. Oakland’s 18 other mausoleums are either stable or being maintained by families or groups, Moore said.

The federal funds are coming through the Save America’s Treasures program, which is affiliated with the National Trust for Historic Preservation.

Save America’s Treasures has provided Oakland Cemetery with a matching grant of $200,000, all of it earmarked for the mausoleum project. Oakland has been able to draw down on the money as it raised its share of the match, Moore said. So far, he said, Oakland has spent about $70,000.

On a sunny afternoon last week, Hornsby, Moore and Libba Grace, who chairs the Historic Oakland Foundation, provided an interpretive tour of the cemetery grounds. They paid particular attention to the graceful sculptures and mausoleums, as well as to words written on tombstones. 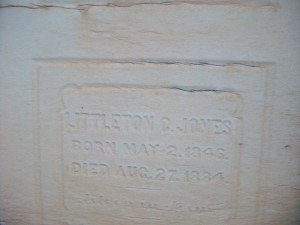 At the Jones mausoleum, Hornsby turned his trained eye and offered up a synopsis of problems visible from the exterior. The issues extend beyond the scope of the metal band that apparently holds the four sides in place.

“Cleaning, re-pointing the mortar, the bronze needs to be cleaned and re-patenaed,” Hornsby said. “The clamping system needs to be looked at so we can find out why the mausoleum’s falling apart, and that needs to be addressed. The marble doors are falling apart.”

Moore was busy looking at the roof.

“The first thing we look at is the roof, because of the leaking. Leaking is a major problem.” 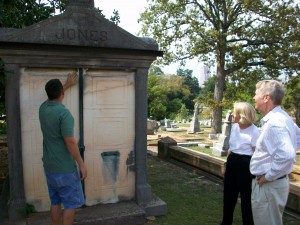 ... but the doors on the Jones Mausoleum may fall apart and a metal clamp along the base of the roof holds the walls together, as Dustin Hornsby shows Libba Grace and David Moore. Credit: David Pendered

“And the lock may not work anymore,” Hornsby concluded. “A fireplace key is too small to fit it. I’ll bring a socket set when we come back on Wednesday.”

The tour paused to watch renovation work that’s underway at the Morris-Hirsch mausoleum. Three men perspired in the afternoon heat as Rusty Joiner balanced on a ladder to remove mortar from between a deck of stones. Nearby, a tripod was in place to help lift stones in a related restoration project.

At some point, Moore dropped out of the tour so he could review a grant application that was to be submitted that afternoon. He said constant fundraising is a fact of life at Oakland, which scraps by on the goodness of its benefactors and tours, along with help from the City of Atlanta, which maintains streets and sidewalks.

Hornsby and Grace continued the tour, stopping for a good visit at the Marsh family mausoleum.

Grace took note of the detailed stone carving on the building. Hornsby shook his head in a combination of dismay and bafflement – dismay at the sheets and blocks that were falling off, and bafflement at the haphazard restoration work that was done without a record.

“It’s a mess,” Hornsby said of the prior work. “It’s puzzled everybody. The mausoleum’s made out of sandstone, but it has pieces of limestone thrown into it. Sandstone is the worst. When it delaminates it’s a problem, and there’s some erosion of the stone and we’re really not sure about it.

“That’s one reason we’re bringing someone in next week to look at it,” Hornsby said. “And that’s the reason we want to keep better records of the preservation – so that, down the road, the people who come after us will know what we’ve tried to do to maintain Oakland.” 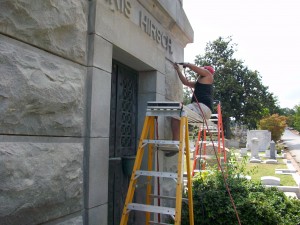 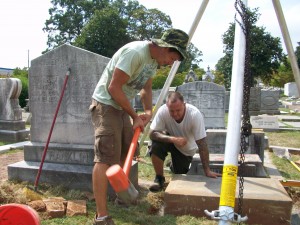 Previous Article
As Atlanta wrestles with awarding airport concessions, it’s time to revisit an idea
Next Article
Past ARC Chair Sam Olens: Is it time to elect a metro leader?