The study, “The Changing Face of Historically Black Colleges and Universities,” reveals a disconnect between criticism and reality in terms of graduation rates, as well as equity issues for students who are lesbian, gay, bisexual and transgender.

Obama also addressed the financial pressures of today’s graduates: “With all those student loans you’ve taken out, you’ve got to make some money … no one expects you to take a vow of poverty.” But that doesn’t eliminate the duty to serve the community by following the example of earlier Morehouse Men who, Obama said, “laid the stones for the path we now walk.”

The study contends it is true that HBCUs lag the national average for graduation rates, as has been widely discussed. But a fact that’s less observed is the role HBCUs perform as a gateway to college for many poor and first-generation college students – including a growing proportion of Hispanic and Asian students – who historically face many obstacles in gaining higher education, the study says.

The study’s author, Marybeth Gaston, of the University of Pennsylvania, is a regular writer in national publications. Gaston has been quoted of late to provide context for the broader policy implications of the nation’s first African American president delivering the first commencement address at an all-male HBCU.

This month, Gaston released a study titled, “The Changing Face of Historically Black Colleges and Universities.” Gaston led a team of six researchers to produce the 18-page document that is the first one published by Penn’s Center for Minority Serving Institutions. 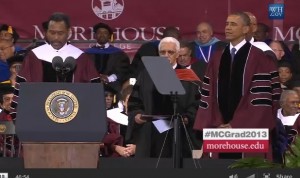 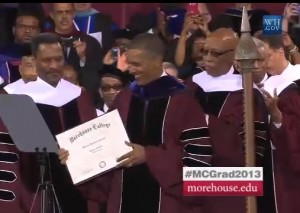 While white enrollment at HBCUs has remained relatively constant, at 13 percent for 20 years, Gaston said Hispanic and Latino enrollment has increased by 123 percent and Asian enrollment has rise by 60 percent.

The tension over college funding boiled over in March in a situation one headline described as a “nuclear option.”

Johnny Taylor, CEO of the Thurgood Marshall College Fund, recommended that HBCUs consider suing the Obama administration over cuts to a federal tuition program called Plus Loan. HBCUs have lost a reported $100 million in tuition revenue since the administration cut back on the program because of high rates of default.

An editorial in hbcudigest.com, titled “HBCUs suing Obama administration – The nuclear option aimed at the wrong enemy,” called instead for solutions that reach further. The editorial called on states to reform access to higher education and solutions other than debt to pay for higher education.

Of Spelman, the report noted: “Spelman College has been an exemplar among HBCUs, sponsoring a national conference in 2011 on HBCUs and LGBT issues.”

Obama mentioned gay and lesbian parents as among the groups who face negative judgments that can shape positive outlooks: “Your experiences give you special insights that today’s leaders need. If you tap into them, that experience will give you empathy.”