Gov. Nathan Deal on Tuesday was quick to jump on President Obama’s budget proposal for not including money to start the Savannah harbor deepening project. 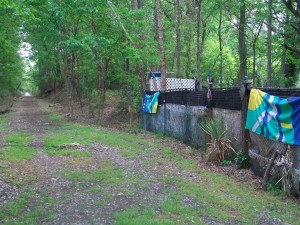 President Obama’s proposed 2015 budget funds a grant program Atlanta is using to develop a BeltLine trail near this one, in southwest Atlnata. File/Credit: David Pendered

But the Obama proposal does contain money for other transportation projects that may be of help in Georgia, particularly in Atlanta. Deal said the state will begin deepening the harbor with funds it already has set aside for the job.

For starters, the president has recommended a four-year transportation program that includes continued funding of the TIGER program. Atlanta has won more than $65 million in TIGER grants to fund construction of the Atlanta Streetcar and a segment of the Atlanta BeltLine.

The Obama budget proposal seeks $1.25 billion a year in TIGER grants for each of the next four years, according to washingtonpost.com. If Atlanta intends to apply for another round of TIGER grant funding, the plans have not yet been widely disseminated.

Regarding transit funding, the Obama proposal would almost double funding for transit systems and intercity passenger rail, from $12.3 billion to $22.3 billion, according to washingtonpost.com.

A story in bostonglobe.com reports that most of the transit funding would be in the form of grants to improve existing intercity rail service and provide new intercity passenger service. The story notes that Obama hopes to boost train service among cities that are less than 500 miles apart, partly in order to ease air traffic congestion. The effort has been largely unsuccessful since Republicans gained control of the House in the 2010 election. 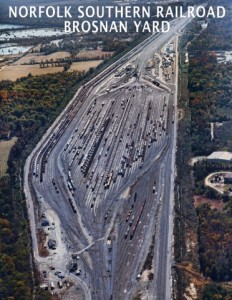 Although Macon’s Brosnan Yard is highly accessible, a recent GDOT report calls for upgrades to the state’s rail system that could be eligible for funding from a program included in President Obama’s proposed FY 2015 budget. Credit: maconworks.com

The American Public Transportation Association usually is quick to comment on federal funding proposals. APTA had not released a statement late Tuesday on the president’s budget proposal. However, in the past, APTA has been generally supportive of the president’s proposals regarding transit maintenance and intercity passenger rail service.

The $10 billion plan would address a freight issue raised in Georgia by the state Department of Transportation, which accepted a consultant’s report that outlines billions of dollars of needed rail upgrades throughout the state.

On the national level, even the CEO of the Panama Canal Authority said in a 2012 speech in Atlanta that deepening U.S. ports so they can accommodate the mega-tankers that will be using the enlarged Panama Canal will be of limited use if the U.S. doesn’t expand its freight-handling capacity.

Back to the Savannah harbor deepening project, Deal didn’t waste a minute to say the state would move ahead with the project.

The governor did not mention woes facing the canal construction. They include a work stoppage because of cost overruns that are the subject of international arbitration. Work resumed just last week, though on a limited basis, after a two-week stoppage.

This is the full statement released by Deal’s office: