He plays the titular Henry, a scruffy widower who works his lone-prairie farm with the help of his teenage son (Gavin Lewis). As his crisp shirts and fashionable suspenders suggest, the kid would prefer a different life than the hard-scrabble one that’s sustained his father for decades.

The pair is as mismatched as they are isolated. 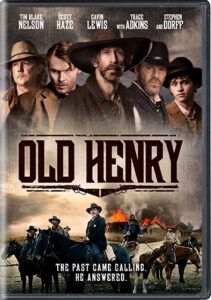 Then one day a riderless horse appears, its saddle suspiciously blood smeared. Henry heads out to investigate and discovers a badly wounded man, a six-shooter and a satchel full of cash. Almost against his better judgment, he brings all three back to his home.

Trouble follows in the form of a trio of men sporting sheriff badges and led by a suspiciously cheerful (subtext: sadistic) Stephen Dorff. They claim they are looking for a bank robber, but Henry isn’t so sure. Is his new houseguest the bad guy – or is it Dorff, whose henchmen have disconcertingly itchy trigger fingers?

But as long as we’re talking gunplay, Dorff notes he’s never seen a farmer who carries his gun the way Henry does.

Dorff may be a self-infatuated poseur, but he’s not stupid – as we soon learn in the inevitable showdown that follows.

“Old Henry” is less an homage to the Old West than it is to old Westerns. A hint of Clint here, a dash of The Duke there. And the final pay-off carries a whiff of frontier legend.

The film has its problems, most notably, the badly miscast Lewis, who apparently wandered onto Henry’s spread from the Actors Studio. And several scenes seem borrowed less from classic Westerns than from cheesy ‘50s TV series (“Wagon Train” anyone?). 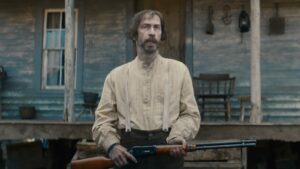 But writer/director Potsy Ponciroli has set things up so it all hinges on Nelson. And he’s magnificent. The performance is what you might call Full-Tilt Hick – an apotheosis of the comic characters he played for the Coen brothers in “O Brother, Where Art Thou?” and “The Ballad of Buster Scruggs.”

Except, Nelson gives Henry a skanky, realistic edge. This is someone not be messed with, someone with a past he’s tried to escape and a future he doesn’t much care about. Someone who just wants to be left alone to raise his son.

If “Old Henry” were a bigger film, Nelson would be generating Oscar talk. But then someone like Henry probably wouldn’t give a dang about that kind of recognition. And neither, I’m guessing, does Tim Blake Nelson.

“Old Henry” is available on demand.