In a potential preview of things to come, a COVID-19 defense is being mounted by a Buckhead retailer that has fallen behind on rent during the pandemic-related shutdown. The landlord’s lawsuit is pending in U.S. District Court in Atlanta. 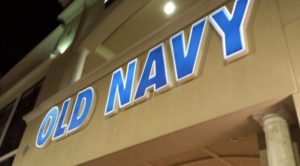 Old Navy contends that it pandemic-related closure means it is not obligated to pay rent since doors closed in March. Credit: foursquare.com

The lawsuit could foretell a rash of litigation in the commercial real estate sector if tenants and landlords wrestle over payments for space that was closed by government action. Tenants may say they can’t pay rent because of the government-ordered shutdown. Landlords may say the lease binds the tenant to payment.

This case involves $148,062.50 in past-due rent, plus other unspecified amounts that may be due under law, according to the lawsuit.

Old Navy, LLC contends the economic shutdown ordered by the “government” has prevented the company from operating its store at Buckhead Station, located at the intersection of Buckhead Loop and Ga. 400. Consequently, Old Navy says it will not pay the lease, that it’s owed a refund for time its doors were ordered shut, and that the pandemic has required that the lease be modified as a matter of law, records show.

The landlord contends that Old Navy signed a lease and has not paid. The landlord claims it asked Old Navy for payment of $148,062.50 in a letter dated June 8. The landlord is Equity One (Southeast Portfolio), an affiliate of Regency Centers Corp., based in Jacksonville, Fla.

Regency Centers added a sense of urgency by noting that it could apply accelerated rental changes with no further notice. Regency Center also stated it may start the process to recover its property.

Old Navy responded with language that may become familiar in potential litigation over rent that’s due under terms of a lease, for space that was ordered closed by a government seeking to flatten the curve of the pandemic. This is how Old Navy’s defense describes the situation:

Old Navy added its own sense of urgency. The company says it is owed a refund of the rent it had paid for March, and asks that the lease be modified.