Olympia building at Five Points to be restored to historic grandeur

The historic Olympia building at Five Points is to be restored to its original grandeur, right down to the neon lighting from its days as the showroom for Wormser Hats. 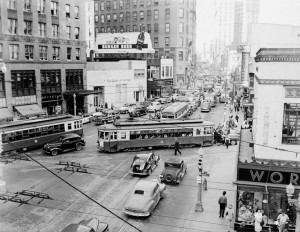 The Olympia building (right) is to be restored to its grandeur of the days when its opening at Five Points stood as a beacon of hope that the Great Depression really was over. Credit: 24.media.tumblr.com

The entire plan for the exterior of the building is based on photographs of the building when it opened soon after the Great Depression, according to Michael Wirsching, with Atlanta-based ASD Inc.

The building is to have a single tenant. Further commercial details were not available from city records and a principal with the owner, Florida-based Encore Real Estate, could not be reached for comment.

“The Olympia is an interesting building due to its scale, the fact that it’s historic, and that we’ll maintain it rather than it being torn down and replaced by something taller,” Wirshing said Monday.

ASD brings a sensitivity to historic preservation. In addition to ASD’s involvement with local projects, such as refreshing the iconic Terraces office park in Dunwoody, the company served as architect for the renovation and expansion Ford’s Theatre, where President Lincoln was shot.

Today, the Olympia building may best be known for its rooftop, on which a neon Coca Cola sign is perched and is to remain. The building also is of note because one corner was cut away at the city’s behest in order to improve the line-of-sight along Peachtree Street between Underground Atlanta and Woodruff Park. 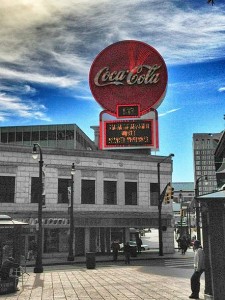 The Coca-Cola sign above the Olympia building is a landmark in Downtown Atlanta.  Credit: Wikipedia

But back in its day, the Olympia opened as a beacon of hope at a time the country was hoping to look up from the dark days of the depression, according to a post on decoarchitecture.tumblr.com:

As the years passed, the Olympia building remained a constant presence as taller buildings rose near Woodruff Park. The modern classic structure is one of the few remaining commercial buildings in Atlanta by Ivey and Crook, a company that helped with the Crum & Forster building in Midtown.

The rear portion of the Crum & Forster buildings is slated for demolition. Georgia Tech owns the former insurance building and says the older space is incompatible with the school’s needs.

ASD’s plans are slated to be considered Wednesday by the Atlanta Urban Design Commission. The hearing was postponed from Feb. 12, when the meeting was cancelled because of winter weather.

The UDC staff report is generally positive on ASD’s proposal.

The report raises a concern with the plan to provide a black color to some of the building’s architectural ornamentation, above the upper level windows and near the roof line. The staff supported the idea of tinting the ornamentation, and called for a color more similar to that seen in photographs.

Wirsching said ASD is open to the suggestion. He said it’s hard to gauge color in the photos, which are black-and-white. Wirsching said another source of comparison may be some areas on the roof that remained colored with a tint that appears to be original.

The UDC’s second concern involves replacement windows on the upper level. The plans call for ones that “match historic precedent.” The UDC report recommends that the replacements have profiles consistent with those of the original building.

The UDC’s third recommendation is for the exterior of the building to be cleaned “with the gentlest means possible.”

As Wirsching described the design work, he cast it with reference to the history of Atlanta.

“The building’s gone through some renovations over the years, most recently in the 1980s, when all the windows were replaced and the old neon tube was stripped off,” Wirsching said. “We’re looking to restore it back to the original – all new windows, upper and lower levels, new marquee band with signage.

“It’s certainly an exciting project,” Wirsching said. “The significance of the building for Atlanta, the age, the location. It’s not something we get to do everyday. From the second floor, you get a view up and down Peachtree and Marietta [streets]. It’s exciting all around. It’s fun bringing these buildings back to life.”

Coca-Cola to refresh its iconic sign at downtown’s Five Points
MARTA ARTS ADMINISTRATOR RECOGNIZED FOR HER WORK AS AN ARTIST CHAMPION
READY FOR MORE? MARTA WANTS TO KNOW