A newly restored track at Morehouse College will continue the legacy of the legendary Edwin Moses and spotlight the track-and-field program at the historically black college.

Moses, 66, is a multiple Olympic gold medalist who had a “10-year streak of 122 consecutive wins — one of the greatest feats in the history of sports,” according to a plaque outside the stadium and the track that is named in his honor. 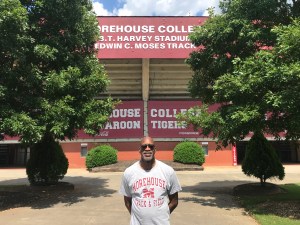 Edwin Moses stands in front of the Morehouse stadium that bears his name. (Photo by Maria Saporta.)

When Moses attended Morehouse from 1973 to 1978, there was not even a track. The track team had to run in the streets or go to Washington High School or Lakewood Stadium to practice.

In an interview on June 1, Moses reflected on his time at Morehouse, his athletic career, his devotion to the college, and his decade-long effort to refurbish the track-and-field that bears his name.

“I owe Morehouse,” Moses said. “I would not be sitting here today. I would not have gone to the Olympics had it not been for Morehouse. It only happened because I was in that atmosphere of serious academics, seeing leadership all around and seeing strong role models.”

When Moses entered Morehouse, he said he was not “recruitable” as an athlete because he was a “late bloomer” and was still growing into his body. So, he focused on academics, earning a degree in physics.

Because Moses loved track-and-field, he “walked on” the team — and he began to develop his athletic abilities. Moses and his classmates had to improvise his practice by having him jumping over fences or jumping over chairs and garbage cans in their dorm’s hallways. 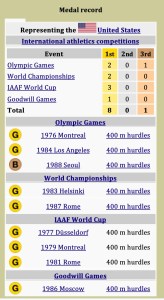 “It was a dream to qualify for the Olympic trials,” said Moses, who was competing in the Montreal Olympics three months later. “Morehouse changed my life in the most unlikely of circumstances. Me becoming an Olympic champion was one chance in a million.”

At the time, the Morehouse track program had an annual budget of just $3,500, which would not cover the costs of Moses’ training for the Olympics. The President of Morehouse at the time, Hugh Gloster, secured an additional $3,000 so Moses could continue his training.

Morehouse President David Thomas said his academic focus did help Moses, who used his knowledge of physics to improve his athletic skills.

“Edwin is the epitome of what we want in our scholar-athletes,” Thomas said in an interview. “Edwin put his physics to work on his hurdles, and he broke the record by using the laws of physics. He just embodies the kind of mindset we want for all of our athletes. Not to mention, it definitely helps the school to have an Olympic champion be a Morehouse alum.” 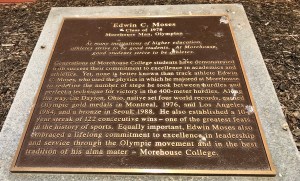 A plaque outside of the Morehouse stadium depicting Edwin Moses’ accomplishments (Photo by Maria Saporta.)

Morehouse finally built and dedicated a stadium in 1986. “Dr. Gloster told me, ‘We are going to build a track and name it after you,” Moses recounted.

The stadium was last resurfaced 10 years later for the 1996 Olympic Games. After that, little was done to keep the track in good shape. Usually tracks need to be upgraded at least every decade.

Seeing the track in a state of disrepair was painful for Moses, who lives in Brookhaven.

“It has nothing to do with vanity of having my name on the track,” Moses said. “It’s about what the students and the school deserve.” 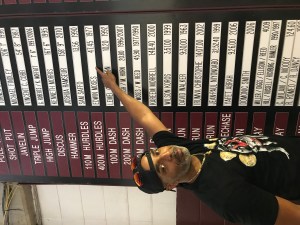 Christopher Doomes, associate head coach of the track-and-field program at Morehouse, shows off Edwin Moses’ world record that he got while he was a student at the historically black college. (Photo by Maria Saporta.)

Fortunately, early after Thomas became president of Morehouse in January 2018, he realized the track and field needed to be a capital priority for the school. So, when three alums — Moses, David Moody and Cal Vismale — called on Thomas to urge him to fix the track and field, they had a receptive audience.

“I proceeded for the next two years to try to raise money to redo the track and field,” Thomas said.

The $4.5 million effort became possible after Billye Aaron, the widow of legendary Hank Aaron, made a $1 million gift to the project, which also includes a new scoreboard and new locker rooms.

“To me, it’s really about giving our scholar-athletes the kind of facility they deserve,” Thomas said.

For Moses, it also means Morehouse also be able to recruit top athletes.

“Potential athletes didn’t want to come to come to Morehouse because the facilities were so rundown,” Moses said. “I’m totally enthused for what it will mean to the students and the track program. We can have a world-class team. We can recruit athletes who will compete on a national and world-class level. It will put Morehouse at the very high level where it ought to be.” 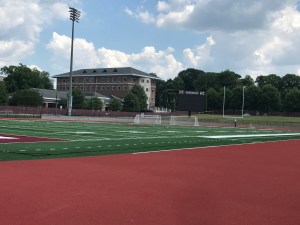 The new track and field at Morehouse still needs to have lines painted on the rubber surface. (Photo by Maria Saporta.)

”This is one of the few places where academics and athletics go hand-in-hand,” Doomes said. “Edwin Moses is the ultimate person to show what that truly means.”

The refurbished track still needs to be painted, and there are other finishing touches that need to be completed before it is unveiled later this year. Moses predicted the refurbished track will lead to Morehouse having a national-caliber team in three to four years.

Looking at the refurbished track, Moses said with pride: “Doesn’t it look beautiful?”