Sixteen years ago, Atlanta was busy getting ready for the biggest event in its history — the 1996 Summer Olympic Games.

This year, it’s the City of London’s turn to enjoy its time in the international spotlight. Next month, it will host the 2012 Summer Olympic Games. 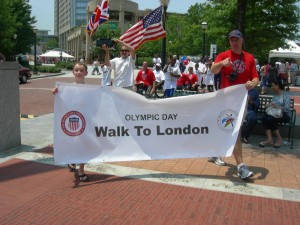 Olympic and Paralympic athletes who live in Georgia came to Centennial Olympic Park Saturday to celebrate “Olympic Day” and to hold a symbolic “Walk to London” — bridging the 16 years that have separated Atlanta and London as Olympic host cities.

“We all have fond memories of those days,” said George Hirthler, who wrote Atlanta’s bid for the Olympic games and one of the organizers of Atlanta’s “Walk to London” event. 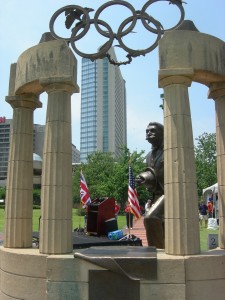 “Walk to London” events took place all over the country as a way to support “Team USA” — the Olympic athletes who are going to represent the United States at the 2012 Games.

The day — June 23 — is named “Olympic Day” because in on June 23, 1894, Baron Pierre de Coubertin — the founder of the modern Olympic movement — convened the first International Olympic Committee (IOC) at the Sorbonne in Paris. Two years later, the first modern Olympic games were held in Athens, Greece. 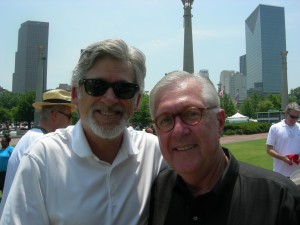 It was in 1990 when Atlanta surprisingly won its bid to host the Centennial Olympic Games — trumping Athens’ symbolic bid to host the games on the 100th anniversary of the modern games.

At Saturday’s event, several people involved in Atlanta’s Olympic Games came to Centennial Olympic Park to participate in the “Walk to London.”

A.D. Frazier, chief operating officer of the Atlanta Committee for the Olympic Games, was actually celebrating his birthday on Saturday. 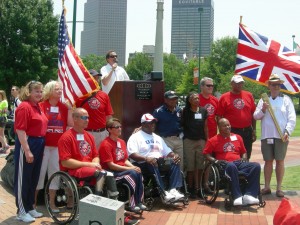 Also celebrating his birthday was Brad Copeland, who designed Atlanta’s original Olympic bid logo and went on to be part of the look of the Olympic Games, not just in Atlanta but in cities across the world. Currently he’s working on the 2014 Sochi Winter Games in Russia.

For Frazier, the Atlanta’s Games are a source of pride.

“We had 40,000 volunteers; 8.6 million tickets were sold,” Frazier said. “We had 197 countries competing — more than any other Olympics up to that time. It was truly a heroic event. It proved Atlanta’s momentum as a world-wide city.” 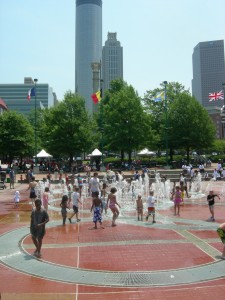 One of Atlanta’s greatest Olympic legacies was Centennial Olympic Park. Before the Games, Frazier reminded the people gathered on Saturday that the area had been parking lots and vacant buildings. After it was developed, the park and its surroundings have become one of the most vibrant areas in central city.

One of the dignitaries on hand was Annabelle Malins, the British Consul General in Atlanta.

“We are ready,” Malins said of London’s preparations to host the Games, which will highlight the environment and sustainability. She added that London will build on the Olympic vision to have sports serve as a vehicle for stronger international relations by “challenging our own prejudices.”