Washington, D.C. – Deep memories are often etched by a distinct taste or smell. When a freezing wind hit my face on the first Monday of 2012 in our nation’s capital, it blasted me back to a profound memory, and forward to a new one.

From our first steps out of the Smithsonian Metro stop, my family and I couldn’t help but think back to that frozen Monday three years ago, when we watched the inauguration of President Obama.

My daughters – now 14 and almost 12 – had never experienced the crowds and chill that faced us Jan. 19, 2009. They weren’t enthusiastic about this re-exposure, but during a Christmas trip to see family near the nation’s capital, Mon. Jan. 2, 2012 was our only day to sightsee.

This time, we were two weeks before a perennially famous Monday – the federal holiday celebrating Martin Luther King Jr.’s birthday.

Unlike the inauguration – a carefully planned trip tied to a historic moment – this recent adventure was almost by happenstance. Because none of us pined to see a specific museum, I pushed for some post-holiday exercise to a new destination – the MLK Memorial, dedicated barely four months earlier. 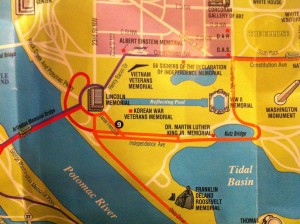 A free tourist map shows the route to the MLK Memorial. A cold wind blows off the Tidal Basin on most January days. The closest Metro stop is Smithsonian, almost a mile away.

A free tourist map directed us west to the Washington Monument and beyond, so we began our nearly mile hike into the wind blowing off the Potomac. This day was 40 degrees, warmer by 10 degrees than the inauguration. But the wind – oh the wind! Both Mondays, the wind averaged 13 mph, chafing our cheeks and ungloved hands, now cherry pink.

No longer surrounded by the throngs of thousands of 2009, we trod a near barren landscape. The Washington Monument was still closed because of recent earthquake damage. Under renovation, the Reflecting Pool was a pit of pipes and dirt.

We couldn’t see MLK, but we kept walking, trying to stay warm. My mind wandered to his legacy in my lifetime. 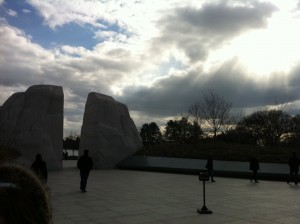 In contrast to summer's smog, D.C. skies are cold and clear in January.

I was a year old when Dr. King spoke of his dream on this Mall. My generation took part in the difficult re-laying of the foundation of freedom, the uneasy establishment of what an equal world should look like. Even we children could see the stark,persistent differences.

As a teenager, I accompanied my father – a professional golfer — to East Potomac Park, a public course near the Mall. Dad played in a fund-raising tournament hosted by his friend Lee Elder, the first black invitee to the Masters. From the cracked parking lot to the scrubby fairways, the facilities where Mr. Elder played were so far, in many ways, from the lush private clubs where most of the black faces were caddies.

While divisions like this remained stark, my understanding of privilege was muddled. Not until well into adulthood, through exposure to wide experience and peoples in Atlanta, did I begin to grasp the access and assumptions afforded me simply by virtue of my skin.

That  complexion grew colder still as we passed the World War II memorial. A bicycle rickshaw driver pointed us across the parkway and a grove of trees. Soon we could see the huge carved white stones, and even from several hundred yards away, the scale of this famous man from Atlanta loomed. 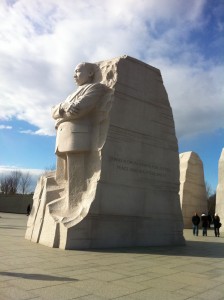 On a stark January day, MLK appeared in sharpest relief.

Critics of this place, I knew, had their points: Why was the location so far from public transportation? Why wasn’t King facing another direction? Then there was my eighth grader, in rubber garden clogs and major grumble mode: Why were we even out here?

My husband reminded her, “Someday day you’ll remember being part of a moment in history.” Would this plainer trip be remembered for anything more than the temperature?

As we passed through the austere entryway — the Mountain of Despair — rays of sun broke through.

Unlike the Mall and Lincoln Monument, dozens of bundled-up tourists milled about, reading the 17 quotes along the 500-foot perimeter Inscription Wall, absorbing and recording with clicks of phones and cameras.

Through scarves and layers peeked faces of a rainbow of races and ages; men and women; some dressed in finery, others with little barrier to the hard breezes off the Tidal Basin.

Against a brilliant sky rose King, almost three stories high, partially emerged from the stone, his arms crossed and eyes to the horizon. The chill seemed to bring him even more in relief, the sculptor’s lines more edgy, bare as the young trees nearby.

A visit here in D.C.’s  hazy summer would not have afforded such a view so bold and  connected to that clear Monday in 2009. 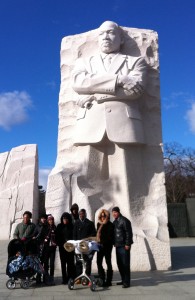 Rudy Nichols (far right) of Baltimore with his family, who gathered in early January at the MLK Memorial from Miami, Jamaica and elsewhere.

“We came out at 6 am for Obama’s inauguration,” said Rudy Nichols of Baltimore, who gathered with a clutch of family from Miami, Jamaica and beyond for a photo at the base of King. “It was colder then, but this – this is related, I definitely think so.”

But how? I asked him.

“People have changed,” he said about the way we see one another’s differences. “But we still have a ways to go.”

For me, the cold made me think of being left out, unwarm – the opposite of the inclusiveness that Dr. King preached. The antithesis of the inauguration spirit.

The temperature put this understanding of isolation in greater relief.

If we cannot, or will not, bridge to those out in the cold – those who are not part of our own status quo, who are different or needy – doesn’t that create a chill within us?

In some way, this subtle realization carried a more powerful personal challenge than the heady public festivities around President Obama.

What Dr. King’s statue seemed to say was: I was alone. I stood in the cold, stood tall for what was right. I stand now among Washington, Lincoln, Jeferson — these national figures of history and sacrifice. 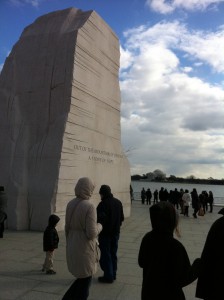 From the rear of the memorial, the view is to Thomas Jefferson and beyond, to the horizon and future.

Follow my eyes to crisp blue horizon – what do you see for the future?  Who will you follow? Who will you lead?

I lingered, trying to put this into a pithy message for my daughters. They had long moved on to the toasty gift shop, and a warm snack. At that age, I did the same.

Their retreat reminded me that exposure to the powerful symbols of our collective story is the first step. Only the individual can choose to chisel a meaning that is true to him or her.

From two cold Mondays in January on the National Mall, this stark new clarity was the souvenir I took back home to Atlanta, to be re-inspired with every wintry gust.