Opening up Peachtree Street to people rather than cars 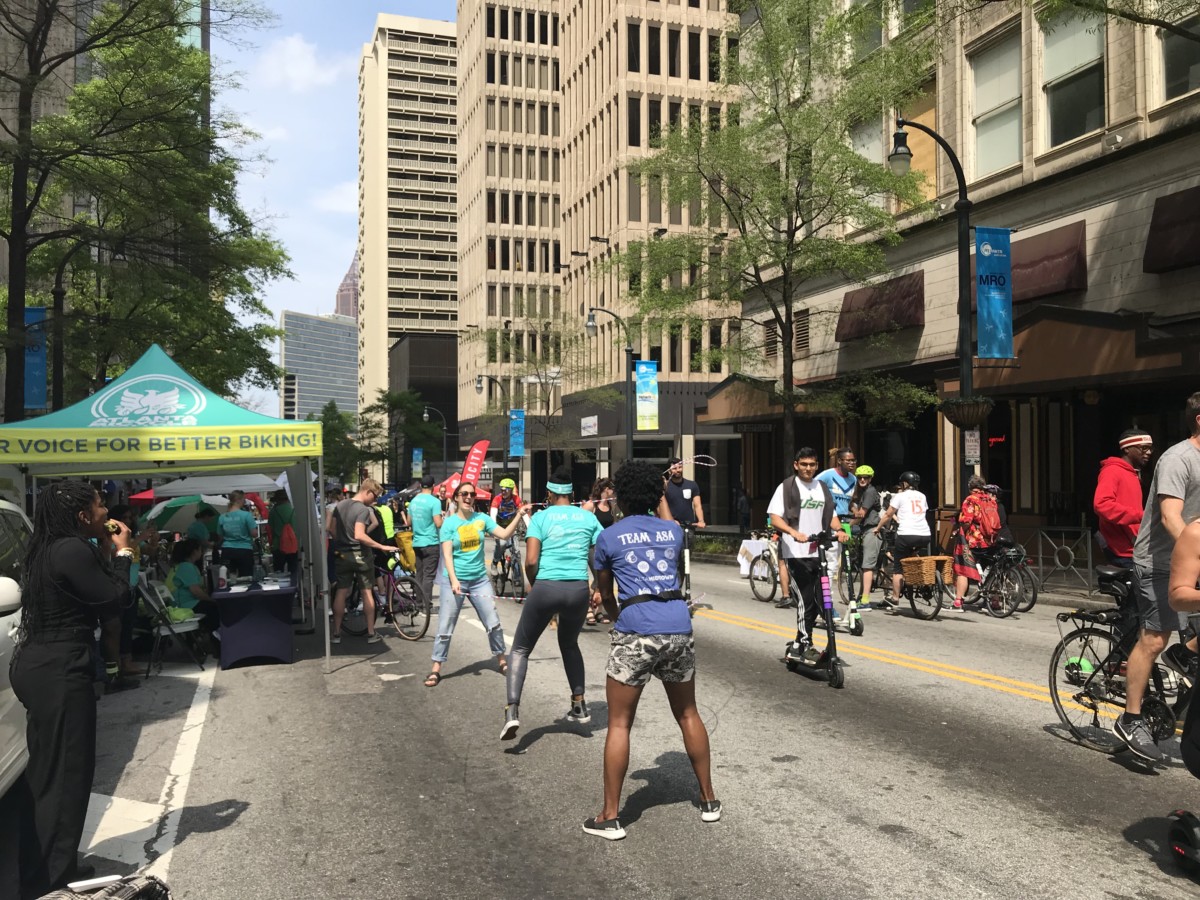 Atlanta Streets Alive is helping change how we view our city’s streets.

More than 120,000 Atlantans turned out on Sunday for the Atlanta Streets Alive along Peachtree Street from south downtown to 16thStreet.

It was the perfect opportunity to test out a proposal by the City of Atlanta to reimagine three key blocks of Peachtree Street – from Margaret Mitchell Square to Baker Street. 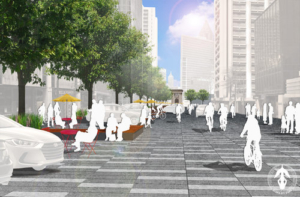 A conceptual rendering of how Peachtree Street could be redesigned as a shared street (Special: Atlanta City Design Project)

The concept would be turn those three blocks into a “shared street” where it would be unclear what space belongs to pedestrians, cyclists and cars. Shared streets have been tried in cities throughout the world, and they have a common goal – to have people recapture the public space that has been consumed by cars.

Atlanta Streets Alive dates back to 2010 when the first event was at Woodruff Park and along Edgewood Avenue. Since then, several times a year, different streets around the city are closed off to cars so that pedestrians, cyclists, e-scooters, skateboarders and other non-automobile modes of transportation can have free reign of our public space.

A week earlier, the international godfather of the Atlanta Streets Alive movement – Gil Penalosa, was in town for Park Pride’s annual Parks and Greenspace conference.

Penalosa started the open streets initiative – Ciclovia – (bikeway in Spanish) in Bogota, Colombia when he was the city’s park’s director and his brother, Enrique Penalosa, was mayor.

In talking about Atlanta Streets Alive, Penalosa said he was glad Atlanta had chosen a more inclusive name than Ciclovia because it really is about bringing people together – whether it be on foot or bicycle or e-scooter or skateboard. 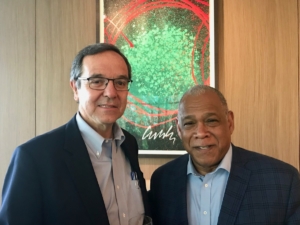 Bogota opens up a major street every Sunday and holiday – 65 days a year – attracting more than one million participants each day.

Penalosa said we also need to change our thinking about how we describe Atlanta Streets Alive. It’s not a road closing, which has a negative connotation. It actually is opening a street to people.

“In the next 25 years, Atlanta will double in population,” Penalosa said. “Where are we going to fit all these people? We have got to create great cities for many, many more people.”

Penalosa explained that about 30 to 40 percent of the space in cities are taken up by streets. Atlanta, and other cities around the world, are going to have to figure how they want to develop as they attract new residents. Having our streets become more public corridors – areas where people can “meet as equals” rather than spaces overwhelmed with cars.

Atlanta Streets Alive on Sunday was a great enactment for how Peachtree Street could feel with more pedestrians and fewer cars.

Atlanta’s Planning Commissioner Tim Keane held a panel discussion last month to discuss the Peachtree Street redesign project at Peachtree Center . As part of the Atlanta City Design work, the department invited artists to envision Peachtree Street. It also presented historical photos of Peachtree Street as well as conceptual drawings of how it would look if it became a shared street.

Keane said that all too often, our city streets have been turned into highways – making them uncomfortable places for people. 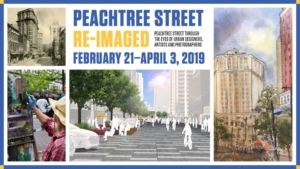 “We need to go in another direction,” said Keane, adding that part of the inspiration was Exhibition Road in London. “You redesign the street as a plaza where it is less clear where the cars go and where the people go.”

Cars instinctively travel at lower speeds in such a shared plaza space.  Keane said that when they presented the concept to affected property owners, “it was exceptionally well received by everyone.”

During Sunday’s Atlanta Streets Alive, an exhibit of the proposed redesign was placed at the pocket-park at Baker Street and Peachtree with the remnants of Atlanta’s historic Carnegie Library turned into a gazebo-like structure.

For those four hours when Peachtree was opened up to people, one could envision how the Peachtree redesign could work.

According to the Atlanta Bicycle Coalition, which organizes Atlanta Streets Alive, Sunday’s event attracted crowds throughout the entire route.

“When the weather cooperates, this route sustains its popularity and, because of the frequency made possible by strong partnerships with the City, Central Atlanta Progress and Midtown Alliance and its position in Atlanta’s culture,” said Haydée Santana, deputy director of the Atlanta Bicycle Coalition.

“The concept of reclaiming Peachtree Street is widely adopted by Atlantans,” she added. “We also attribute the sustained and growing adoption of Peachtree as an open street to an increase – in number and in extent – of participation among the business community along this route.” 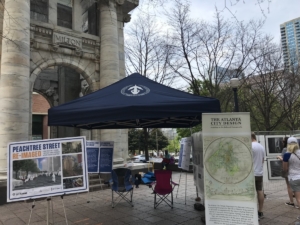 Santana credited key partners along the Peachtree corridor for the success of Sunday’s Atlanta Streets Alive. Those included the Woodruff Arts Center, Colony Square and Newport, which has been investing in the redevelopment of south downtown.

Penalosa, however, said Atlanta should increase the frequency of its Streets Alive – saying it would be great if it were held every Sunday – or at least once a month.

While that might be ambitious, permanently transforming three blocks of Peachtree Street – one of the highest points in the entire city – could be a strong launching pad for shifting our streets from places for cars to spaces for people.

When MARTA was first being proposed in the 1960s, original plans called for that stretch of Peachtree to be turned into a pedestrian mall. MARTA would have been built two levels below street level and cars would have traveled one level below. At the time, it was estimated that Peachtree Street would have been under construction for about six months for the proposed “cut-and-cover” MARTA line. Those plans were scrapped because it was opposed by John Portman, who had just developed the Hyatt Regency. The project would have disrupted auto access to the hotel during construction. Because of that, MARTA had to be constructed 10 stories underground in a tunnel that bored through granite – on display at the Peachtree Center MARTA Station. 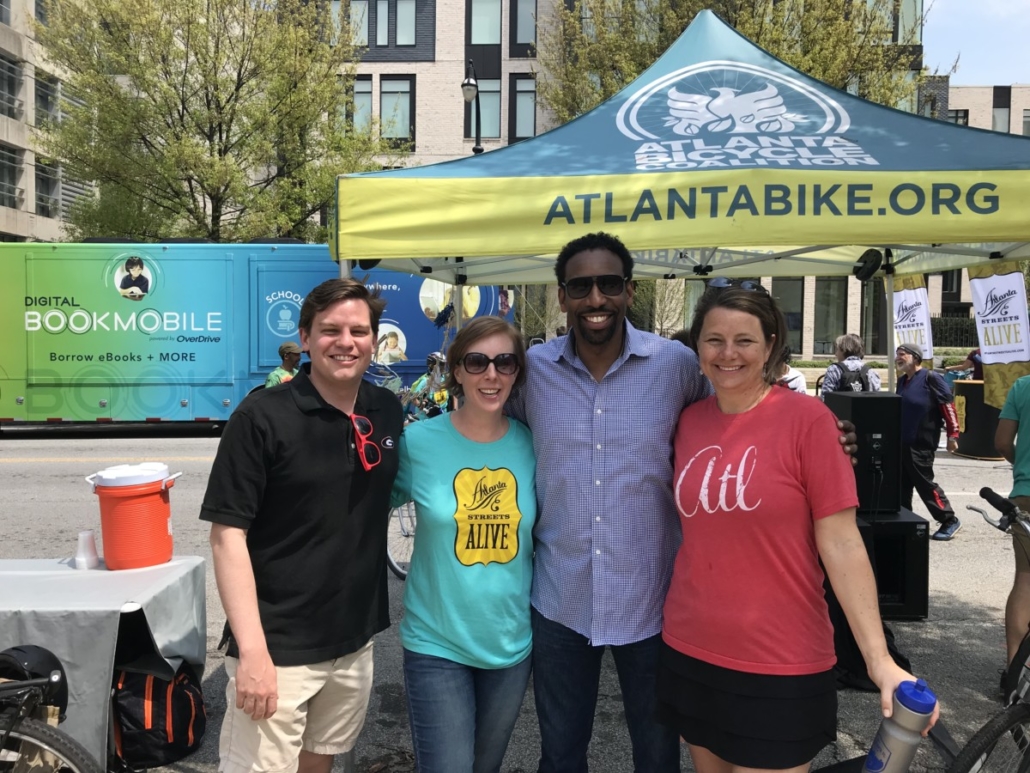 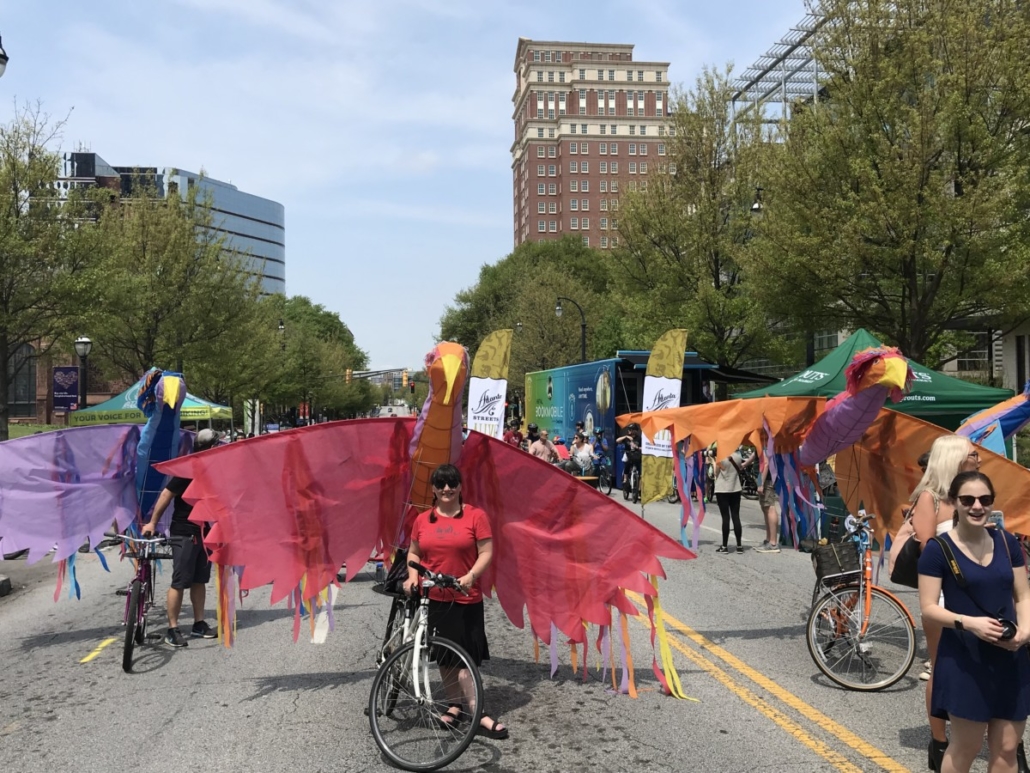 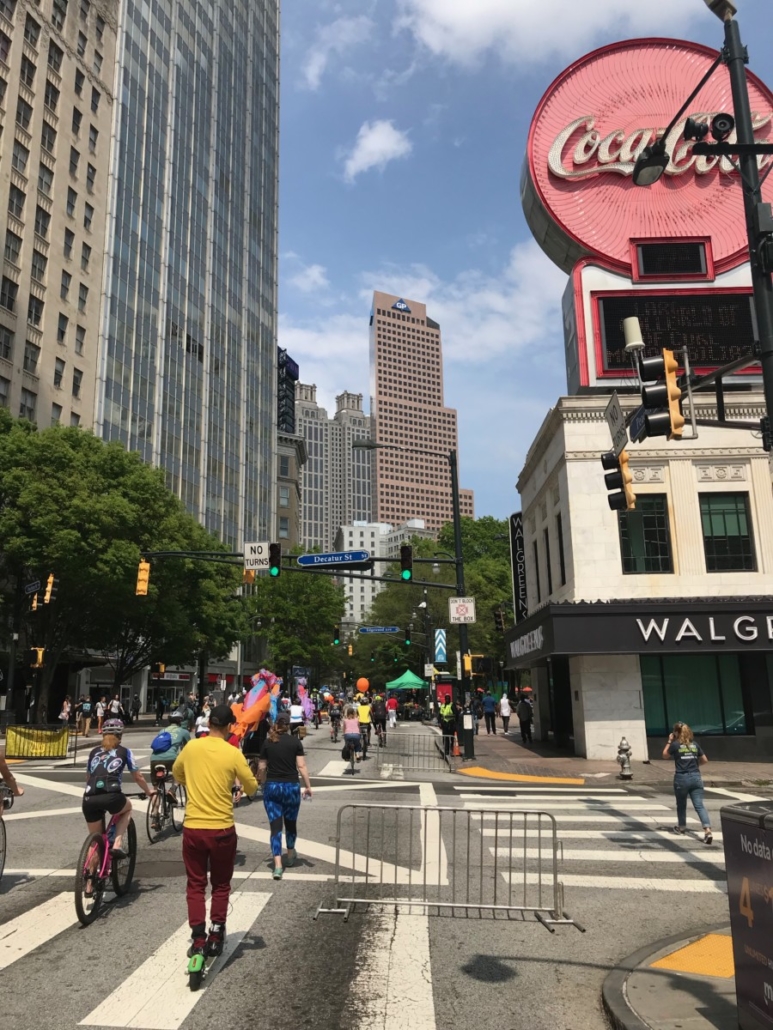 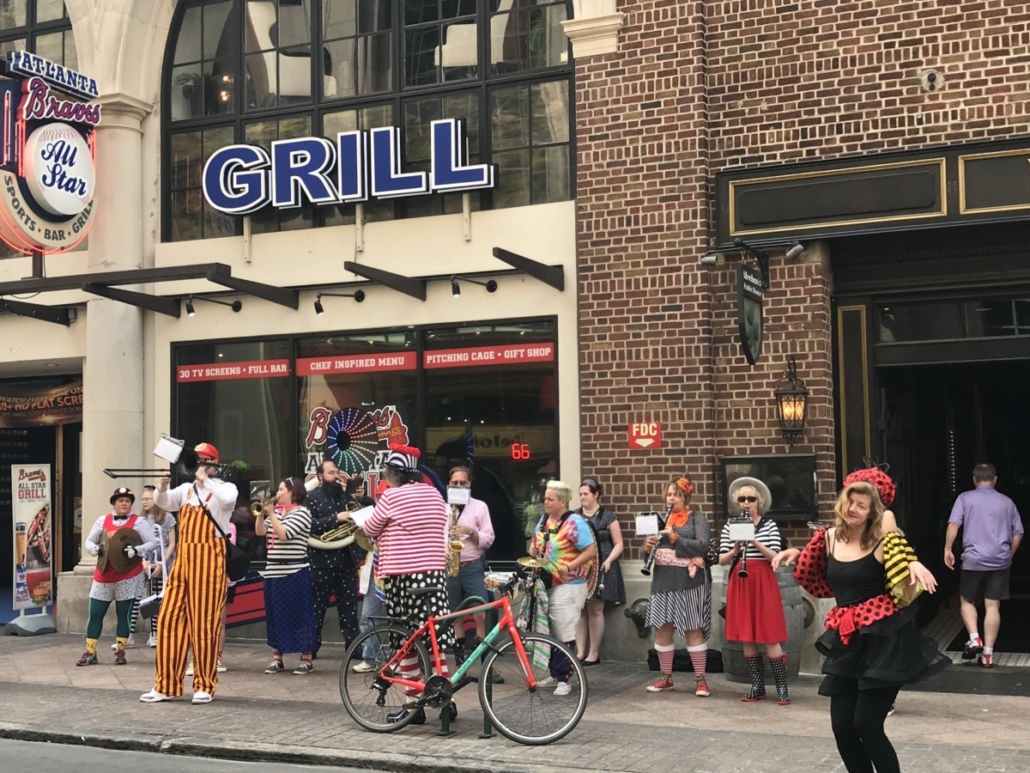 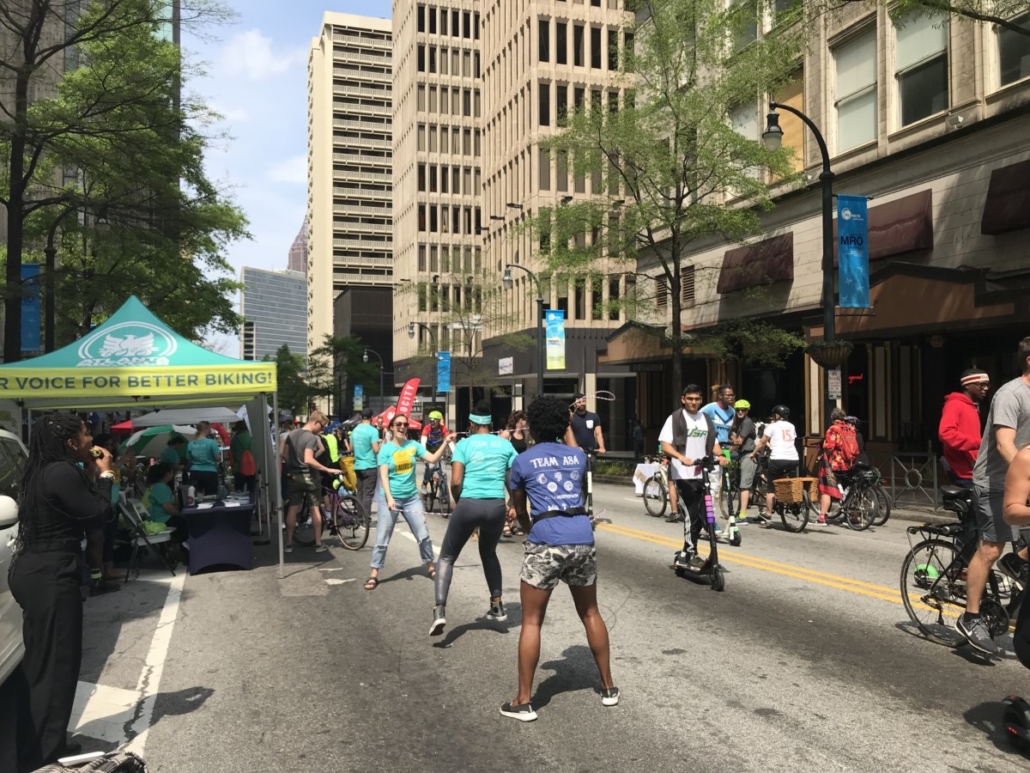 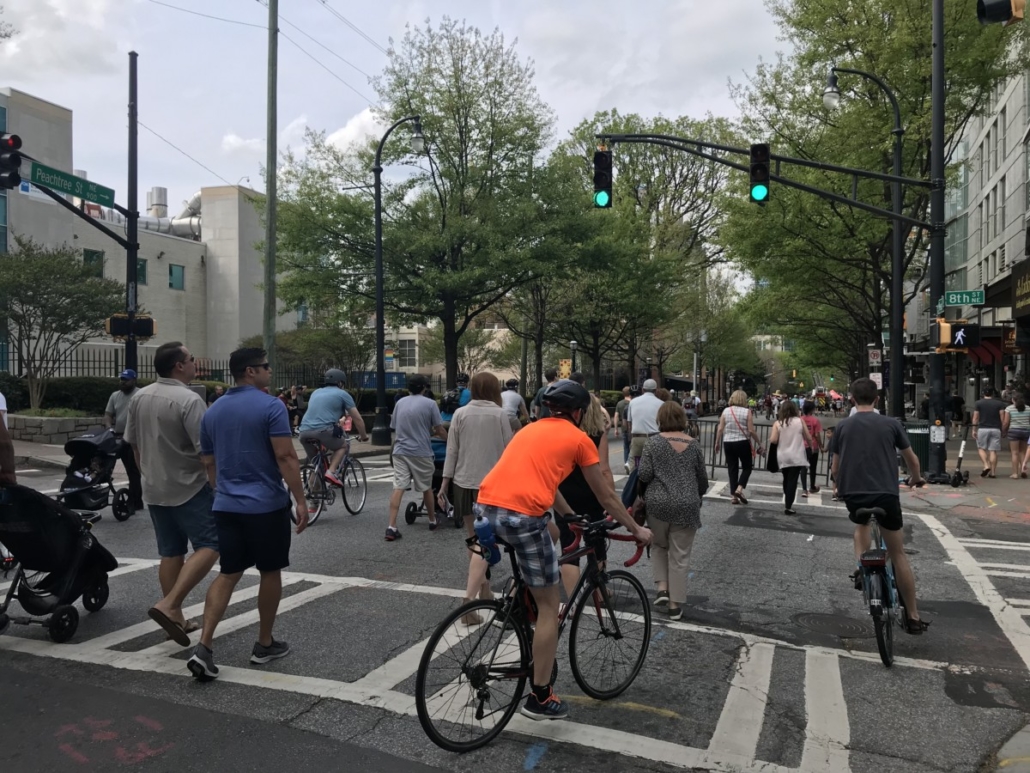 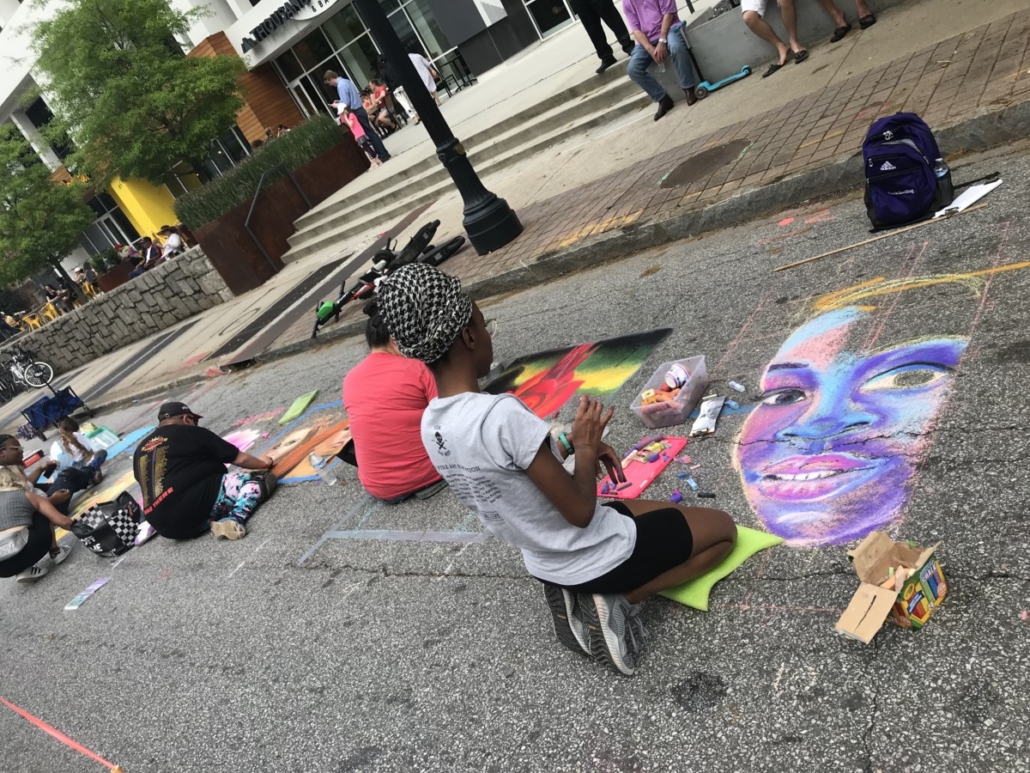 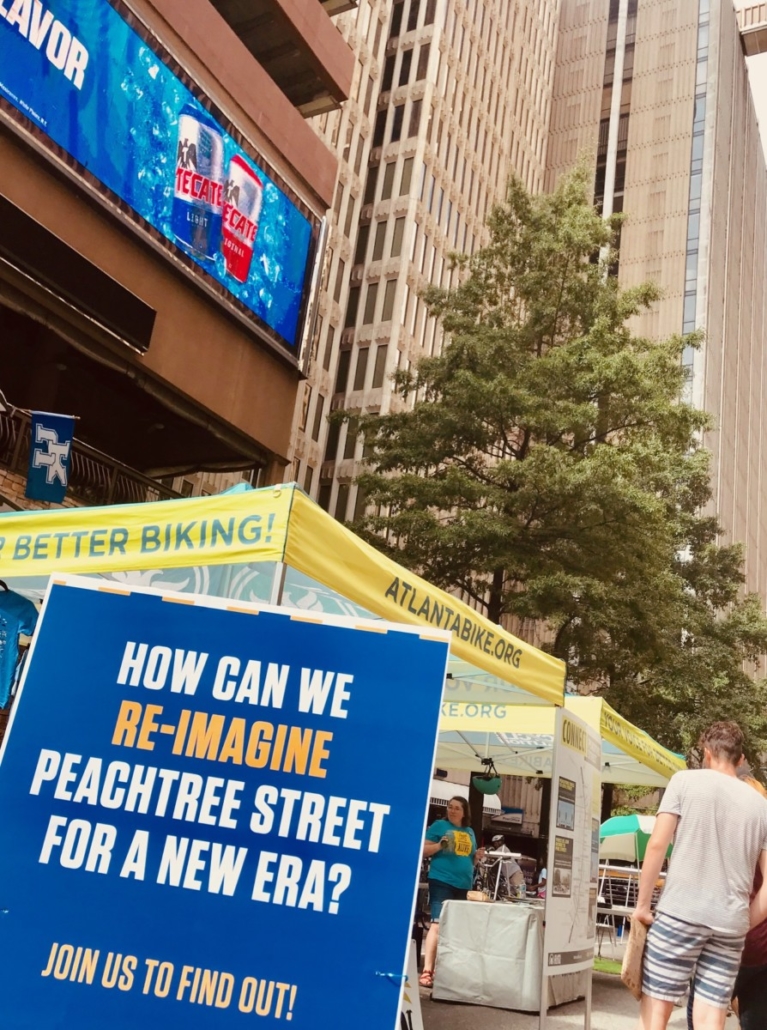 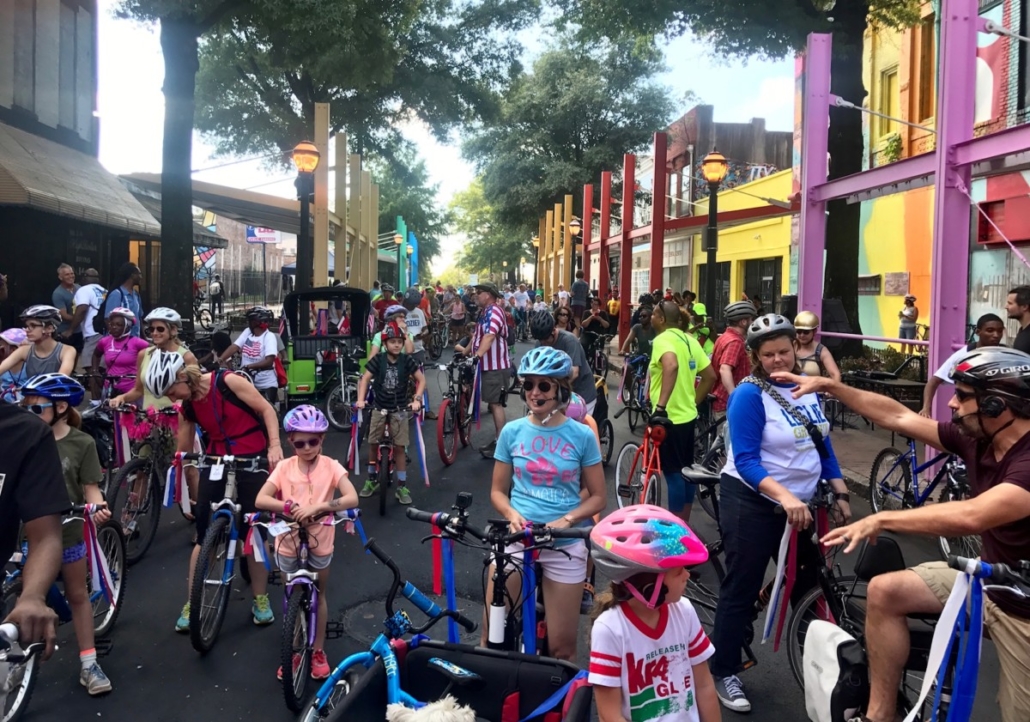