To the CEO of the Panama Canal Authority, there isn’t a question about the need to deepen the Savannah Harbor, or any other east coast port. All of them should be expanded so their regions can benefit from global trade.

The real question is whether the ports of Savannah, Charleston, Miami, New York, New Jersey and Jacksonville will have the highways, railroads and distribution centers to accommodate cargo delivered to and from the new generation of really big ocean-going vessels, according to Alberto Aleman Zubieta, chief of the Panama Canal Authority.

During a question and answer session after his speech Tuesday at the MODEX 2012 logistics conference in Atlanta, Zubieta was asked how many trillions of dollars the U.S. needs to invest in its ports, and which ports are the closest to being fully prepared to handle newer ships that carry twice the cargo of older vessels. 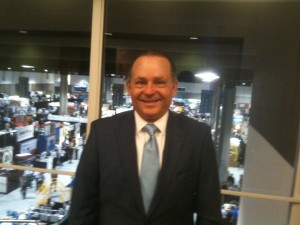 “I don’t know the cost,” Zubieta responded. “What I do know is there has to be investment made in the infrastructure of the U.S.

“Some ports are going to take advantage,” he said. “Norfolk is ready…. Rail has been modernized between Norfolk and Chicago; they understand the benefit of getting cargo to its destination.

“The U.S. needs to have a comprehensive program of what ports should be the ones in which you invest the money, and then do it,” Zubieta said. “But you cannot wait 10 years because of feasibility studies. The process takes too long.”

Zubieta underscored his point by noting the entire Panama Canal was built in a decade with tools and technology available 100 years ago. He said 10 years is about how long it now takes a proposed project just to go through environmental impact studies.

Zubieta is overseeing the $5.3 billion expansion of the Panama Canal, which is to open in 2014 and provide a new trade route for ships too big to use the canal. Those vessels, carrying goods from Asia, now call at ports in Los Angeles and Long Beach, Ca. Trains carry the goods to their final destinations, and Zubieta said this method will remain the standard for high-value cargo.

Zubieta was in Georgia this week to deliver two keynote speeches – the one Tuesday at the Modex 2012 logistics conference, and Monday at the Georgia Foreign Trade Conference 2012, at the Cloister on Sea Island.

As Zubieta described his view of global shipping, he shifted the paradigm of the proposed deepening of the Savannah Harbor from its traditional form when discussed in Atlanta.

Savannah’s port is more than a staging venue for commerce with Asia that needs a deeper harbar, according to Zubieta. (Next month, Atlanta Mayor Kasim Reed will lead a trade delegation to China in hopes of establishing future trade relations for Atlanta-area companies.)

According to Zubieta, once Savannah Harbor is deepened, the bigger ships will provide access to Asia and a myriad of trans-shipment destinations. The idea could be to expand trade between Savannah and way stations in Jamaica, the Bahamas, Panama, and eventually even Cuba.

The Cuban port of Mariel – located about 25 miles west of Havana – has been targeted for a $1 billion expansion project to be completed in 2014. Brazil is putting up 70 percent of the investment, according to a report last week by the BBC. Singapore also is investing in the Mariel port, Zubieta said.

From these way stations, Georgia companies could distribute goods throughout Central and South America, Zubieta said.

The U.S. has free trade agreements with countries including Peru, Mexico and Chile, and is negotiating trade promotion agreements with Panama and Columbia, according to export.gov.

“What you need to understand is that you’re in a globalized world,” Zubieta said. “There is a market to be captured, and if you don’t capture the market, someone else is going to do it.