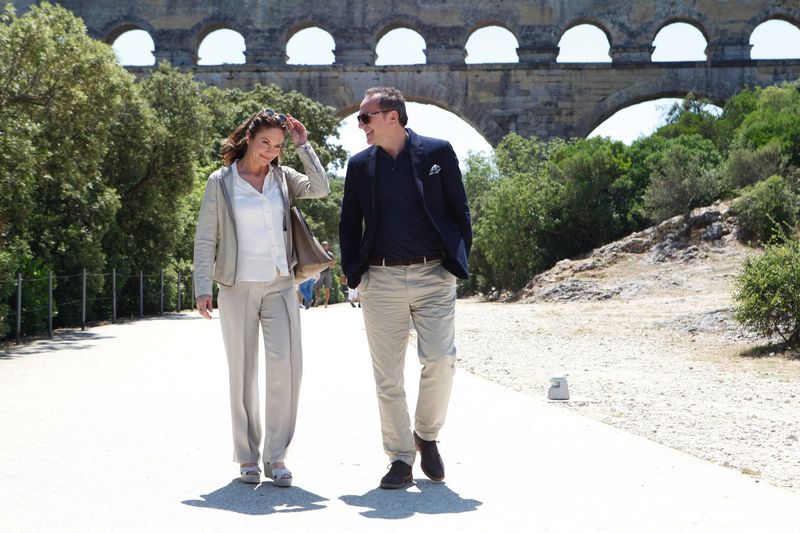 Share
Tweet
Share
Pin
Pocket
WhatsApp
Buffer
Email
Reddit
0 Shares
By Eleanor Ringel Cater
A movie has to be pretty bad to make Diane Lane look bad.
Alas, “Paris Can Wait” is that movie.
Lane plays Anne, a chicly dressed accessory (read, wife) to power-player filmmaker, Michael (Alec Baldwin). He’s not a monster (well, not by Hollywood standards). Sure, he plays around and generally treats her more like a personal assistant than a wife (Where are my socks? Where are my pills?)). But at least he’s semi-conscious of the inequity and, in his way, values her. 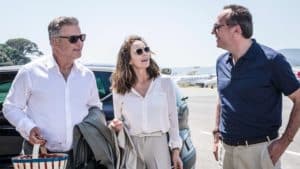 But maybe not quite enough. As the movie opens, they are decamping from Cannes. He’s headed for Budapest, the location of his current film. She’s got a bad earache that precludes flying. His associate Jacques (Arnaud Viard) offers to drive her to Paris; he’s going that way anyway.
“Let’s pretend we don’t know where we’re going or who we are,” Jacques jauntily proposes.
Anne reluctantly agrees. So he takes her on the scenic, ooh-la-la route with stops at such little-known treasures as a fabric museum in Lyons or an ancient Roman aqueduct. And the restaurants…ah… the restaurants. An endless foodie paradise of exquisite wine and mouth-watering meals.
Of which, Anne inevitably takes pictures. She’s an amateur photographer, we learn, given to snaps of flowers, children and, yes, food. (Spoiler alert: This is meant to indicate she has hidden talents that her overbearing husband and lavish lifestyle have somehow repressed)

For his part, Jacques is trying zee — how you say? — seduction, lightly brushing his little finger against her hand as they explore a ruin. It’s decidedly creepy (him, not the ruin). He also likes to stop every hour for a cigarette break. 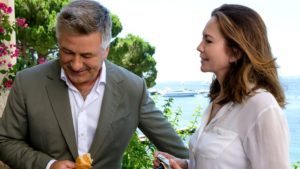 Alec Baldwin and Diane Lane in ‘Paris Can Wait’

No wonder a seven-hour drive stretches into two days.
Director Eleanor Coppola is best known as the wife of Francis Ford Coppola and the mother of Sofia (who just won Best Director at Cannes). “Paris Can Wait” is her feature debut. Previously, she directed the feature documentary “Hearts of Darkness,” about the legendary and apocalyptic filming of her husband’s legendary and apocalyptic  “Apocalypse Now.”
She clearly wants us to see Jacques’ and Anne’s journey as something slightly erotic, wryly hopeful, and definitely juicy, filled, as it is, with delicious pleasures of all sorts — from gustatory to, perhaps, carnal.
Ok, we get it. Anne needs to stop and smell zee roses.
Alas, there is the zee-ro chemistry between her stars. And the film is so poorly written, so unimaginatively shot that you find yourself wondering how can someone make both the French countryside and Diane Lane so laboriously unattractive?
Viard is badly miscast (reportedly, he wasn’t Coppola’s first choice). He’s meant to exude a sort of rumpled Gallic charm. Instead he suggests Pepe Le Pew, Looney Tunes’ sleazily amatory skunk.
As for Lane, she’s a casebook study in how hard it is for a beautiful, talented woman to have a career of any length or even consequence in Hollywood. Here’s someone who’s done Euripides and Chekov, “Lonesome Dove” and “Unfaithful,” now reduced to trilling “I’ve always wanted to see lavender in bloom! How gorgeous!”   Or cooing, like a flustered Bachelorette, “Are you trying to get me drunk?” 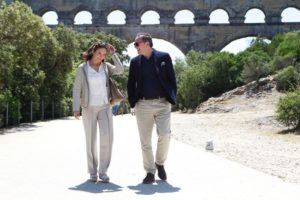 Diane Lane and Arnaud Viard in ‘Paris Can Wait’

Well, at least the director believes in equal opportunity squirm-inducing dialogue. Jacques gets to ask, “Have you made peace with your life?”
Intentionally or not, “Paris Can Waits” asks if Coppola has made peace with hers. There’s a far more daring (albeit potentially brutal) picture lurking underneath the lavender and chocolate mousse. It’s about how it feels to be pushed to the side for your entire life, to be known as “the wife of…”instead of yourself, to earn praise for remembering your husband’s inseam.
It hurts to write this, but at its core, “Paris Can Wait” comes off as something that came about when the rest of the Coppola family got together and agreed, “Let’s give Mom something to do.”
Ouch.
Share
Tweet
Share
Pin
Pocket
WhatsApp
Buffer
Email
Reddit
0 Shares
Tags: