After building more than 180 miles of trails in Georgia, the PATH Foundation is now memorialized in the name of a future trail in Atlanta – PATH400 is the name of the trail that’s to run alongside and beneath Ga. 400. 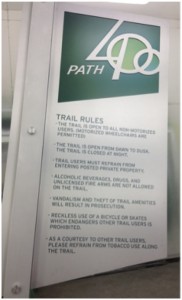 A logo and signage have been adopted for PATH400, the new name of the trail to be built in the Ga. 400 corridor. Credit: Livable Buckhead

When the trail’s complete, it will join a trail network valued at $55.5 million that PATH has completed and transferred to local governments, according to PATH’s most recent Form 990, the IRS tax return filed by non-profit organizations.

Despite the size of this contribution to public greenways, or perhaps because of it, the PATH Foundation has become such a fixture in metro Atlanta since it was formed in 1991 that it’s possible to forget that it is still a relatively small organization in the big world of non-profits.

In its tax return for 2012, PATH reported total assets of $13.1 million, according to PATH’s Form 990, the tax return filed by non-profit organizations.

Revenues for the year totaled $10.4 million, including $9.4 million in contributions, gifts and grants; and $929,277 in government grants.

Expenses for the year totaled $6.8 million. This included $5.6 million for the transfer of completed trails; $255,206 for trail maintenance; and the remainder for fund-raising, wages and benefits, and other routine business expenses.

According to PATH’s tax return, the organization has a single mission:

To that end, PATH has developed trails throughout metro Atlanta that include signature pieces such as the Silver Comet Trail, Arabia Mountain Trail, Stone Mountain Trail and – most recently – the Eastside BeltLine Trail.

PATH is expanding outside metro Atlanta.

Construction is to start early next year on the PATH400 Trail, which will follow the Ga. 400 corridor and link with the planned Atlanta BeltLine and proposed Confluence Trail along Peachtree Creek. Credit: Livable Buckhead

In Carrollton, PATH is working on the campus of the University of West Georgia to build a segment of the planned Carrollton Green Belt. The job is to create a greenway through the heart of the campus by removing invasive plants, connecting pathways and building a tunnel for the trail beneath a busy road.

On the Georgia coast, PATH is working to complete the vision outlined in its 2005 master plan for St. Simons Island. PATH plans to partner with the St. Simons Land Trust and Glynn County to complete a 2.5-mile trail that would be built atop fiberglass sheet piles installed next to the road. Construction would begin after about $2.5 million in funding is secured.

In Atlanta, the 5.2 mile, multipurpose PATH400 is to serve park-starved Buckhead and connect with two planned trail networks: The Atlanta BeltLine, and the Confluence Trail, which is part of the planned 26-mile trail system envisioned in the South Fork Conservancy’s plan to restore Peachtree Creek.

PATH400 provides a unique civic contribution, according to Denise Starling, executive director of Livable Buckhead, the non-profit that’s implementing the plan to build the trail and helping to raise construction funds.

“Ga. 400 has been described as ‘the scar that will never heal’ because of the way that it divided Buckhead,” Starling said in a prepared statement. “Through the PATH400 project we’re overcoming a lot of the negative feelings that people have had ever since GA 400 was built, and even more importantly we’re transforming the corridor into an asset for the entire community.”

Ed McMcBrayer, a co-founder of PATH and its executive director, said the partnership created to complete the Ga. 400 project is stronger than any one of its components.

“The PATH Foundation has had this trail on our master plan for more than 20 years, but we thought it would never get done,” McBrayer said in a statement. “Our partnership with Livable Buckhead and the Buckhead CID leveraged our collective strengths and put this project on a fast track. We are going to have a trail that is far better than any of our organizations could have accomplished separately.”