Peachtree Creek in Atlanta is a visual marker of recent rains that have continued to moisten North Georgia this month. The creek level has varied significantly, as has the temperature of water in the creek, according to the federal monitoring system. 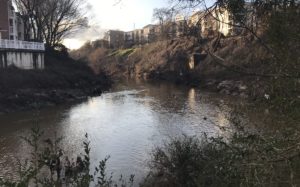 Striations along the banks of Peachtree Creek show signs of water levels that have risen and fallen significant during January. Credit: David Pendered

The variations in water height were readily apparent Friday at the confluence of the North and South Forks of Peachtree Creek. There, in the vicinity of MARTA’s Lindbergh Station, the two branches merge to create Peachtree Creek.

The shoreline showed evidence that the stream level had been high in recent days. Striations along the creek bank indicated that the water levels had reached toward the flat, ground level at the top of the stream bank. The striations indicated the water level dropped somewhat slowly – the stream had flowed at any particular level long enough to have etched bands into the soil.

These physical signs were affirmed by the streamgage that reveals the height of water in the stream above a reference point. This height does not refer to the depth of the stream, only to the elevation of the water surface above a particular point. The information pertains only to that particular streamgaging station.

The streamgaging station is operated and maintained by the U.S. Geological Survey, in cooperation with Georgia’s Environmental Protection Division. The station also monitors real-time water quality information with funding from the City of Atlanta. 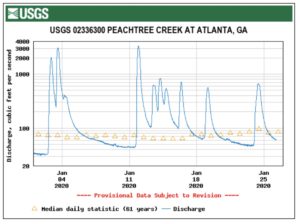 The median flow of water at a Peachtree Creek streamgage has tracked above the historic mean for much of the month of January. Credit: waterdata.usgs.gov

The gage showed two times when the stream height was at 12 feet or above – days before Jan. 4, when it neared 12 feet; and a few days after Jan. 11, when it exceeded 12 feet.

The water level plummeted quickly after the first high level, falling to nearly 3 feet. The second time, higher levels of up to 5 feet and 6 feet persisted for days.

These readings are much higher than the median daily discharge that’s been recorded over the past 61 years, according to another chart.

Water temperature has varied as dramatically as the water height. 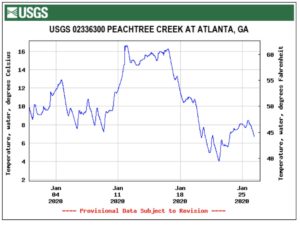 The water temperature in a portion of Peachtree Creek has varied by 20 degrees in January. Credit: waterdata.usgs.gov

The temperature reached its lowest point of the month a few days before Jan. 25. The temperature actually began dropping the week following Jan. 18 – from a high of just over 50 degrees to a low of 40 degrees, according to the chart. The chart does not provide information about historic median water temperature.

These water level readings are in keeping with the latest report from the U.S. Drought Monitor.

Rainfall of a half-inch or more fell across the northern two-thirds of Georgia in the week leading up to Jan. 23. Parts of Alabama received more than 2 inches of rain during that period.

The southern portion of the state received little to no rain. Drought conditions were expanded along Florida’s western panhandle region because of soil moisture levels that indicated dryness for the past one to three months, according to the report. 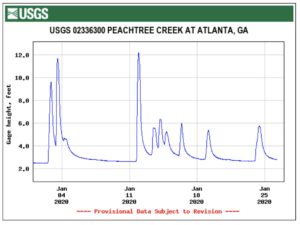 Peachtree Creek’s water height has varied significantly in January as rainfall of a half-inch or more was measured across North Georgia. Credit: waterdata.usgs.gov