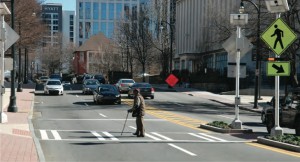 The cover photo on PEDS’ new report illustrates one aspect of the pedestrian safety issue in metro Atlanta. Credit: PEDS

“We want safety to be a top priority, or as important as congestion relief,” Sally Flocks, PEDS president and CEO, said Sunday.

Flocks is slated to present the report Thursday to the ARC’s Transportation and Air Quality Committee. PEDS will ask ARC to conduct a pedestrian safety study. The Atlanta Regional Commission already is sensitive to the issue of pedestrian safety and now provides funding for last-mile connectivity efforts, Flocks said.

The new report intends to help the region’s leaders take the steps necessary to reverse a trend of pedestrians becoming less safe in Georgia, particularly in metro Atlanta.

Transit systems bear some of the responsibility for pedestrian safety. They have to consider the competing desires to locate transit stops near their riders, with the riders’ expectations that they can cross a road near the transit stop:

Flocks said the design challenges are not overwhelming, and not necessarily all that expensive.

“There are lots of options to increase pedestrian safety and save lives, and we are seeing real improvements in areas where efforts have been made,” Flocks said.

For example, Chamblee is a much safer area for pedestrians now that traffic islands have been installed in “hot spots” – areas that have been shown to have a high number of crashes involving pedestrians, Flocks said

One of PEDS’ major initiatives is to improve pedestrian safety along a stretch of Ponce de Leon Avenue in Atlanta, a gateway to Atlanta that connects to Decatur and other points east.

PEDS has been working on the corridor for years and would like to see median islands installed along portions of Ponce to provide safe havens for pedestrians crossing the road.

If the islands are added to the Ponce plan, they would become part of the road diet already underway. The corridor has been studied for years, including a 2011 evaluation conducted with help from the ARC’s Livable Centers Initiative. The LCI study envisioned a $5 million project to implement a: