Fewer dogs and cats are being euthanized in Fulton and DeKalb counties now that a non-profit organization hired last year is promoting adoption of animals and counseling for owners who had planned to abandon their pets. 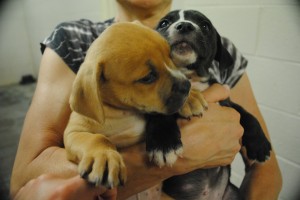 The DeKalb County Animal Services’ shelter has a steady supply of puppies for those seeking a young companion animal. Credit: LifeLine Animal Project

The euthanasia rates in February were about 14 percent in DeKalb and less than 25 percent in Fulton, according to Rebecca Guinn, executive director of LifeLine Animal Project. Historic highs have been near 85 percent at each facility.

LifeLine has been able to reduce the destruction of healthy animals through two major initiatives: Providing offsite adoptions in busy areas within communities, rather than only at the county shelter; and surrender counseling to pet owners who initially intended to leave their animals at a county shelter, Guinn said.

The stat sheet from December shows that 52 individuals who had intended to abandon their animals to the DeKalb shelter decided to keep them after being informed other community resources. In Fulton, several animals were taken to new homes through 10 offsite adoption sessions. 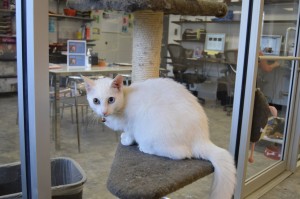 Frost sits in the cat kennel area of the Fulton County shelter, which was renovated with a grant from the Purina Cat Chow’s “50 Shelters, 50 Years” program. Credit: LifeLine Animal Project

Guinn formed LifeLine in 2002 with the specific purpose of reducing the euthansia rate of unwanted animals in metro Atlanta.

Guinn was a practicing lawyer at the time, specializing in white-collar crime, and eventually took on the animal welfare issue as her full-time job. 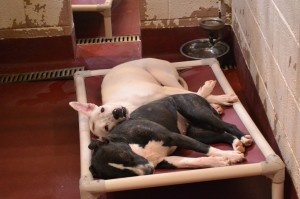 LifeLine’s statement of purpose to the IRS is simple: “Stop the euthanasia of healthy and treatable cats and dogs in the Atlanta area shelters by promoting homeless pet adoptions, spay/neuter programs and public awareness.”

Guinn said LifeLine implements the mission statement by providing alternatives to the practice of shelter euthanasia as a way to deal with animal overpopulation.

“We have a stewardship for all animals,” Guinn said. “This is a species of animals we created and they are completely dependent on us. We have obligations to ensure their care.

“Our society’s way to deal with animal cruelty was to kill the victim,” Guinn said. “When an animal cruelty case was brought, the dog was usually impounded in the county animal shelter and at the end of the case, because there was no where for the animal to go, the animal was euthanized. The emphasis of our organization is to end that practice.

“We’ve had to make some really hard decisions,” Guinn said. “We are a ‘no kill’ organization, but we still have to euthanize some of the animals in our care.”

This shift in DeKalb and Fulton counties, away from a reliance on euthanasia to manage unwanted animals, has occurred out of the spotlight. That may be because animal welfare is an issue that tends to rise to public attention only when controversy arises.

The last big flap in metro Atlanta was in 2012. A national protest focused on Atlanta and Fulton County for allowing a circus to perform despite its use of bull hooks to control elephants.

In 1984, the outrage was over the death of Twinkles the elephant. Twinkles once lived in Atlanta’s municipal zoo and died not on a Georgia farm, as the zoo first reported, but while performing with a traveling circus in North Carolina. The ensuing controversy resulted in the creation of Zoo Atlanta.