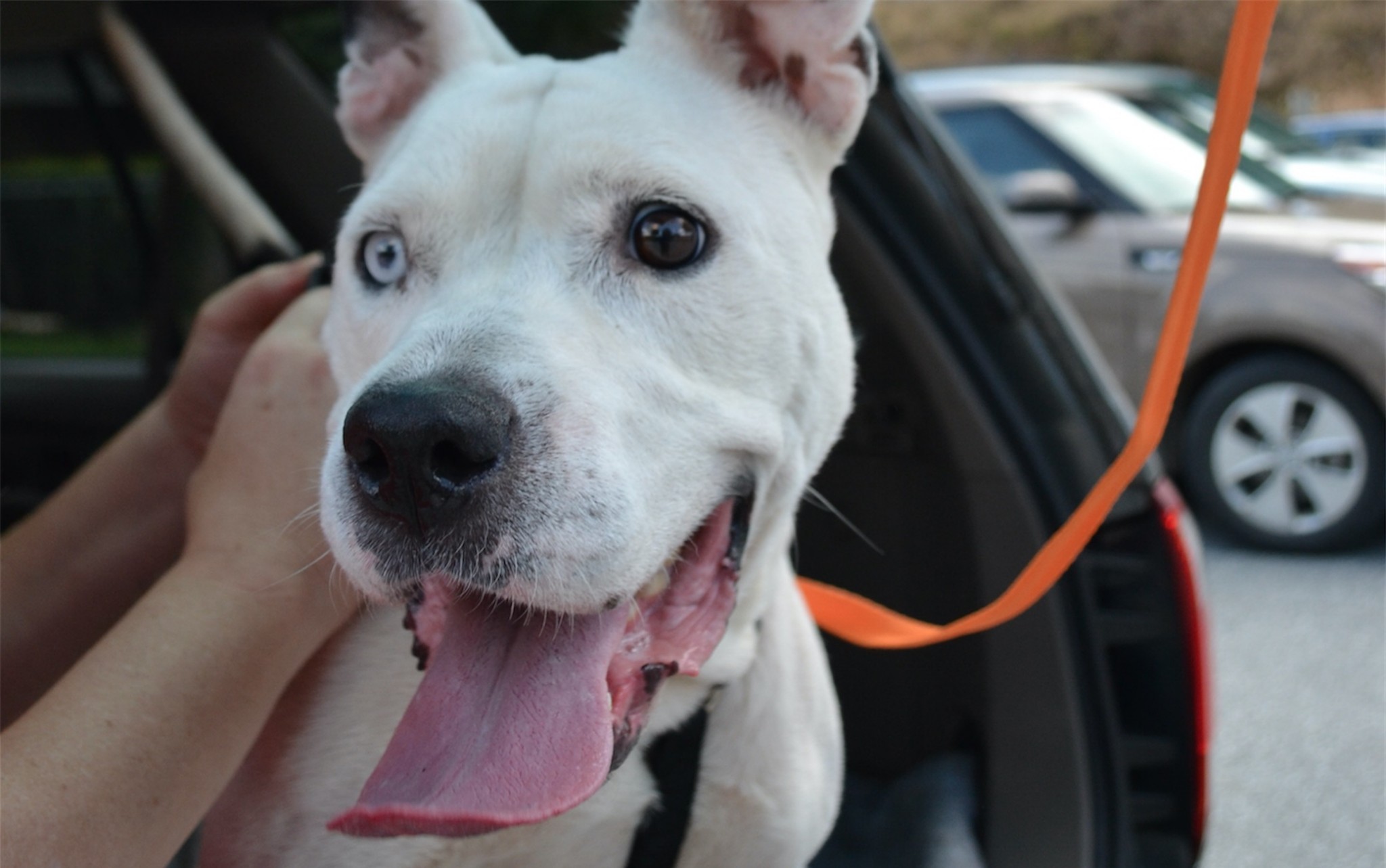 Princess has hopped into the vehicle and is heading home with her family through an adoption arranged by LifeLine at the Fulton County Animal Shelter. Credit: LifeLine
Share10.2K
Tweet39
Share14
Pin1
Pocket
WhatsApp
Buffer
Email
Reddit
10.2K Shares 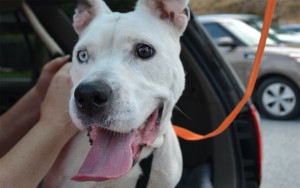 Princess has hopped into the vehicle and is heading home with her family through an adoption arranged by LifeLine at the Fulton County Animal Shelter. Credit: LifeLine

The turn-around has been so dramatic that the two counties should be able to reach the “no kill” threshold of saving 90 out of every 100 animals, according to Rebecca Guinn, founder and CEO of Lifeline Animal Project. The “I’m In” campaign, seen on MARTA vehicles, aims to reach the goal by 2016.

“It’s our dream that the community really wants this, and wants to be part of this,” Guinn said. “It’s broadening the compassion in our community to include our animal companions. We can do it. It’s achievable.”

The “no kill” rate of 90 percent accounts for some animals being too sick, too injured, or too behaviorly unsound to save, Guinn said. The rate has been reached in cities including Austin, Texas and Reno, N.V.

To Lifeline board Chairperson Anisa Telwar Kaicker, the region’s treatment of animals is on the quality of life index for attracting folks to metro Atlanta. Kaicker is the founder and president of Atlanta-based Anisa International, a multi-national company in the cosmetics industry with offices in the U.S., England, and in China, where the company owns a brush manufacturing plant. 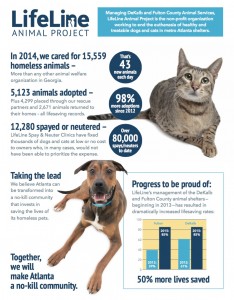 The animal shelters in Fulton and DeKalb counties are finding homes for 85 percent of pets. In 2012, the live release rate was closer to 15 percent. Credit: LifeLine

“That we, as a community, care about the homeless animals says a lot about us,” Kaicker said. “People who are looking to move to Atlanta would find that attractive. I think there’s an ROI [return on investment] when it comes to running our shelter. This says a lot about Atlanta – that our shelters have a higher percentage of animals getting out, that they name every animal at the shelter, that every animal has a bowl and a right.”

“It makes us a better city, and we will treat each other with more respect and more humanity,” Kaicker said.

Anisa International donated $40,000 to renovate the outdoor space at the Fulton shelter. LifeLine sponsored a ribbon-cutting ceremony Monday to officially open renovated dogs runs, and a brand new space where folks who want to adopt a pet can play with the animal outside the shelter, and introduce the animal to other family pets to see if they’ll get along.

“LifeLine’s work with FCAS [Fulton County Animal Shelter] is making a difference in Fulton County,” John Eaves, Fulton County chairman, said in a statement. “Through the generous and consistent support of partners and the community, access to quality adoption and other animal services is dramatically decreasing the population of homeless animals in our community.”

County commissioners in Fulton and DeKalb decided to outsource their shelters in 2013. Both counties were struggling to manage the shelters at a time property tax receipts were flagging in the wake of the Great Recession. 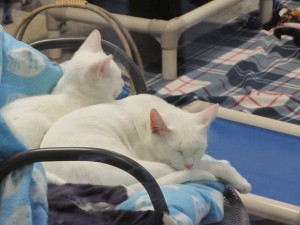 Cats do what cats do best, doze, on bedding procured by LifeLine for the Fulton County Animal Shelter. Credit: LifeLine

Part of the trouble was that shelters were too small and too old, more than 30 years, to meet current demands without killing a high proportion of animals brought in by owners or picked up by animal control officers.

LifeLine took over the Fulton shelter in March 2013 and the DeKalb shelter in July. Guinn’s organization immediately began creating partnerships to increase the number of animals that get adopted – either locally or in the Long Island suburbs of New York City.

“We work hard to make sure all our partners are doing the right thing,” Guinn said. “We’re fortunate there are a lot of people willing to help.”

More than 100 partners are now helping to place animals in homes, Guinn said. The list of partners includes Angels Among Us Pet Rescue, Atlanta Pet Rescue, and lots of rescue organizations that focus on particular breeds, such as Boston terriers and beagles. 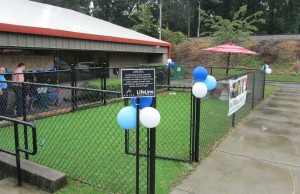 Anisa International donated $40,000 to upgrade the outdoor area of the Fulton County Animal Shelter. Dog runs were renovated and a new meet-and-greet space created for animals and their adoptive families. Credit: LifeLine

Some animals are transported to the North Shore Animal League America, in Port Washington, N.Y., Guinn said. The organization’s website says it’s the world’s largest no kill animal rescue operation, and has saved more than 1 million animals since 1944.

“Once a month, we transport 15 to 40 animals there,” Guinn said. “They’re a large, no kill shelter. They have a huge facility and a huge capacity to adopt animals into homes. They actually send a team down to get animals.” 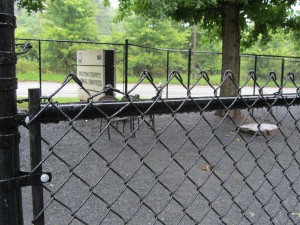 Dog runs were renovated at the Fulton County Animal Shelter with a $40,000 grant from Anisa International. Credit: LifeLine

The contract fees paid by the counties covers the cost of operating the shelters, Guinn said. In the case of Fulton, the contract also provides for LifeLine to manage the animal control program. DeKalb County retained control of that program in its jurisdiction.

The contracts cover the entire county, regardless of whether an area is incorporated or not incorporated. Fulton paid $3.4 million and DeKalb paid $2.6 million in 2014, according to LifeLine’s 990 tax form. Contributions and grants totaled $897,000.

“If we want to do more, go to the next level, it does take businesses or individuals to contribute,” Kaicker said. “That’s just part of the situation we’re in. I see the direct impact, the before and after, when employees get to see they’re contributing to something.” 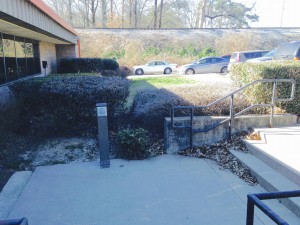 The new meet and greet space at the Fulton County Animal Shelter replaces this grassy area adjacent to the front steps. The project included new grass, fence, trees, and a table with umbrella. Credit: LifeLine