Rockdale County Chairman Richard Oden is preparing to change his lapel pin from a light blue ribbon to a pink ribbon.

Awareness pins are a subtle but stark reminder that Georgia leads the nation in the rates by which individuals developed or died from prostate or breast cancer in 2011, according to the Centers for Disease Control and Prevention.

Public health departments around metro Atlanta participate in a variety of programs this autumn that are intended to help residents get tested for the disease and learn good health care practices.

For example, Fulton County’s Department of Health and Wellness will sponsor an event Oct. 7 at the Adamsville Recreation Center in Atlanta. Free health screenings for glucose and cholesterol levels, HIV, blood pressure, and sickle cell anemia will be provided. Fulton offers a number of breast health procedures at little to no cost, based on income qualifications. 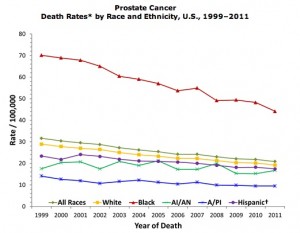 Death rates from prostate cancer have declined across all reported groups, with the largest declines among black men. Credit: CDC

In Gwinnett County, the Great Gwinnett Road Race on Oct. 5 is slated to raise funds for the Georgia Breast Cancer Coalition Fund and the family of Alyssa Tucker, a 10-year-old girl who’s been at Scottish Rite CHOA since her diagnosis in July with rhabdomyosarcoma.

In Cobb County, participants in an upcoming 5K walk, on Nov. 1, have raised more than $35,000 in pledges to help the American Cancer Society fund breast cancer research.

The increasing awareness of cancer occurs as the CDC reports mixed results in reducing incidence rates of breast and prostate cancers. The trending results from 2001 through 2010 show: 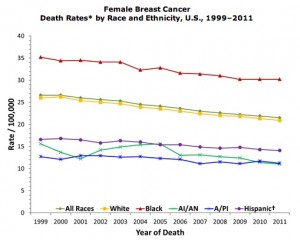 Death rates from female breast cancer have varied over time, but black women have been more likely to die of breast cancer than any other group. Credit: CDC

All cancers are a significant cause of death in Georgia. The state is among 12 states that rank in the second highest rates at which people developed or died from cancer.