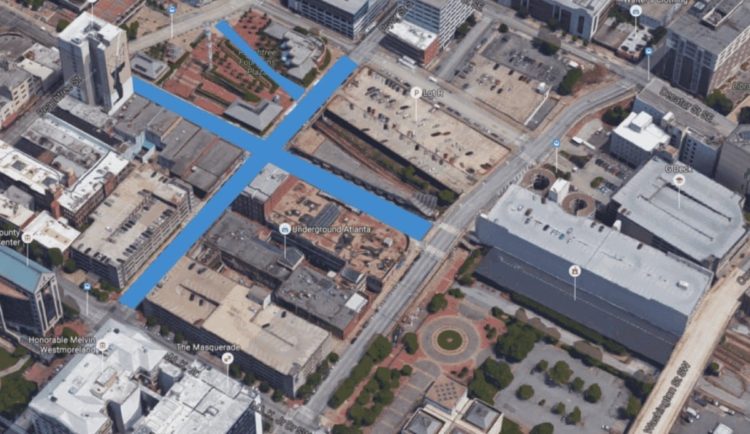 Update: The plan was approved by the Atlanta City Council in a 10-4 vote.

The Atlanta City Council today will hear a proposal to turn several streets in and around Underground Atlanta into private property. 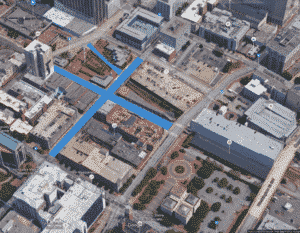 ThreadATL.com’s illustration of the proposal to turn over the streets to Underground Atlanta’s private developer (Source: ThreadATL.com)

Over the weekend, several concerned citizens and community activists wrote about the proposed legislation, which has not been introduced through the normal committee structure where they would be fully vetted.

Atlanta Mayor Kasim Reed is expected to present the proposal at today’s City Council meeting, and the assumption is that the abandoning of public streets is part of the city’s plans to sell Underground Atlanta to South Carolina developer WRS Realty.

In his column, Garbett expressed concern that this would allow the developer to control access to the property. He also questioned why this unprecedented move was being taken.

I sent Garbett’s column to T. Scott Smith, CEO of WRS Realty, for his response.

Smith sent me back an email stating: “We are not going to close the streets to pedestrian or bike traffic. We would like to stop vehicle traffic so that we can join the four corners and make a community feel to the development. At no time would the streets be closed to thru walking traffic or bicycles.”

The city’s sale of Underground Atlanta is scheduled to happen early in the year – days after the Peachtree Drop will bring in 2017 – the final year for the celebration at Five Points.