A site plan of the cell tower site as seen in RESCOM's report. Oakland Cemetery is to the left and the Fulton Cotton Mill Lofts is to the right.

A 165-foot-tall cell tower looming over Atlanta’s Oakland Cemetery and historic Cabbagetown is the goal of a proposal being blasted as ugly and secretive by City officials, preservationists and neighborhood leaders.

And it may be the start of many more battles to come, as the developer is offering dozens more tower sites across Georgia – including at least 18 within Atlanta – on railroad rights-of-way  where a selling point is the lack of typical local government review. 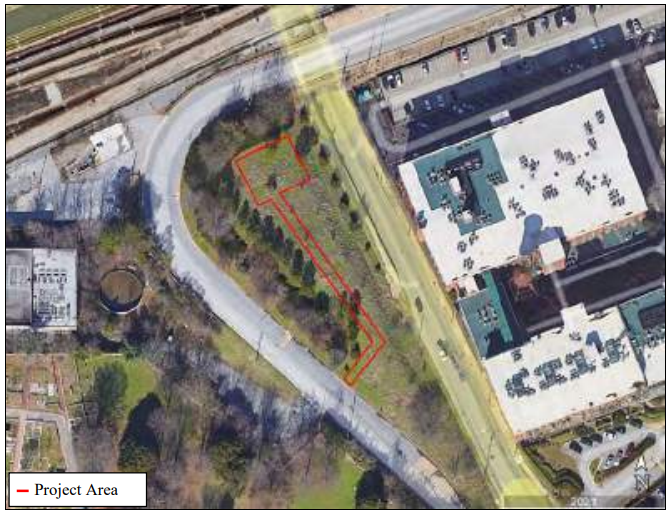 A photo illustration of the cell tower site and driveway as seen in a consultant’s report, with Oakland Cemetery to the left and the Fulton Cotton Mill Lofts to the right. Boulevard is highlighted in yellow; the curved roadway is a CSX railroad driveway.

A Chamblee-based company called CitySwitch wants to build the tower, surrounded by a chain-link fence topped with barbed wire, on a small area of CSX railroad property along Boulevard, roughly 200 feet from the cemetery and right across the street from Cabbagetown’s Fulton Cotton Mill Lofts, both of which are historic landmark properties. Many more historic sites and districts — including that of Martin Luther King Jr. – are within the tower’s half-mile “viewshed” review. Yet CitySwitch’s consultant, RESCOM Environmental Corp., claims the tower would have “no effect” directly or visually on them.

Locals and preservationists aren’t buying that – especially when places like the cemetery weren’t even contacted by the consultant.

“It’s thoughtless,” said David Yoakley Mitchell, executive director of the nonprofit Atlanta Preservation Center (APC), noting the importance of the local landmarks to the city’s culture. “A hundred-sixty-foot, blinking, baby Eiffel Tower surrounded by barbed wire is not the example of our culture.”

“It takes an especially myopic drone to glance at the nook between two historic landmarks and soullessly muster the thought, ‘Perfect!’” says John Dirga, the secretary of Neighborhood Planning Unit N and the NPU representative for the Cabbagetown Neighborhood Improvement Association. Both groups oppose the proposal.

Richard Harker, executive director of the Historic Oakland Foundation, owner and manager of the cemetery, said CitySwitch has not reached out to his organization. “We are disappointed about their lack of community engagement and very concerned about the visual impact the tower will have given its proposed location directly next to Oakland’s walls,” he said.

The City’s Office of Design is “very concerned” about the tower, Interim Director Doug Young said in an April 29 email to the consultant. “The proposed telecommunications tower would add a significant, incompatible vertical element in this space.”

Also “concerned with the adverse visual impact” is Easements Atlanta, a nonprofit that holds a historic preservation easement on the Cabbagetown lofts, according to Acting Executive Director Ian Michael Rogers.

In short, the tower is being met with an army of local opposition, notes Jacob Elsas, CEO of Cabbagetown’s Patch Works Art and History Center and descendant of the builder of the mill that is now the historic lofts. “If there’s any silver lining to consider, it’s that this inane proposal has galvanized – and motivated into collaborative action – multiple groups that rarely work together (kind of like the West vs. Russia in Ukraine),” Elsas said in an email.

“It is difficult to examine RESCOM’s application and conclude that they made a legitimate effort to communicate the tower’s impact on the community (in terms of both visual and health interests),” he added. “In fact, there seems to have been a concerted effort to avoid public knowledge and to misrepresent the tower’s proximity to the historic communities.” 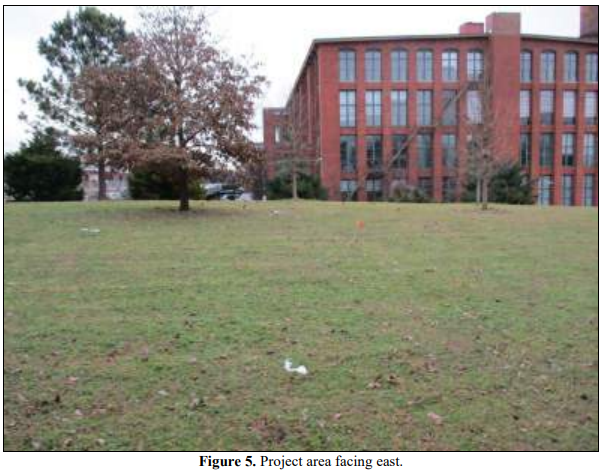 The Fulton Cotton Mill Lofts as seen from the site of the proposed cell tower in a consultant’s report.

CitySwitch did not respond to a comment request. But RESCOM and property owner CSX both said they follow all applicable regulations.

“This consultation is not complete, and the undertaking may yet be determined to have an adverse effect to historic properties,” said RESCOM’s Andrew Smith. “If that is the case, in order to minimize the effects it is possible that the proposed project may move, be reduced in height, or additional preservation efforts within the area may be undertaken to mitigate the effects of the undertaking.”

However, little local review is required for this type of project. Indeed, CitySwitch touts on its website how it was able to build towers in a “notoriously difficult place” in Virginia with restrictive zoning because using railroad property circumvents local land-use and building permits.

CitySwitch does need approval from the Federal Communications Commission. Due to the proximity of the historic sites, the project also must undergo “Section 106 review,” a report on impacts on such sites named for part of the federal Historic Preservation Act of 1966. Ultimate comment will come from the federal Advisory Council on Historic Preservation, but state-level agencies are responsible for collecting local input, which in Georgia is the state Historic Preservation Division (HPD). HPD is reviewing RESCOM’s application through May 6 and has granted “consulting party” status – a kind of official commenter designation – to the City, the APC and Easements Atlanta. Gathering general public comment is up to CitySwitch and RESCOM, according to HPD.

On April 6, RESCOM filed a report with HPD asking it to agree with a finding of no impacts on historic properties. According to that report, the public notice about the tower was an ad in the South Fulton Neighbor, a small community newspaper whose distribution in the Cabbagetown area is unclear, and which provided only a phone number and a snail-mail address. No public comments were received, the report says. RESCOM also mailed notices to the City, the APC and the Atlanta Regional Commission, but did not yet have comments, according to the report – and not surprisingly, as the notices were sent the day before the report was filed. RESCOM did not respond to SaportaReport questions about if and how further public comment would be solicited.

The plan and historic findings

The tower is planned for a roughly triangular, grass-covered hillside bounded by Boulevard, a CSX driveway and the railroad tracks that run parallel to Decatur Street. According to the report, the area is a former railroad spur that served the historic mill. 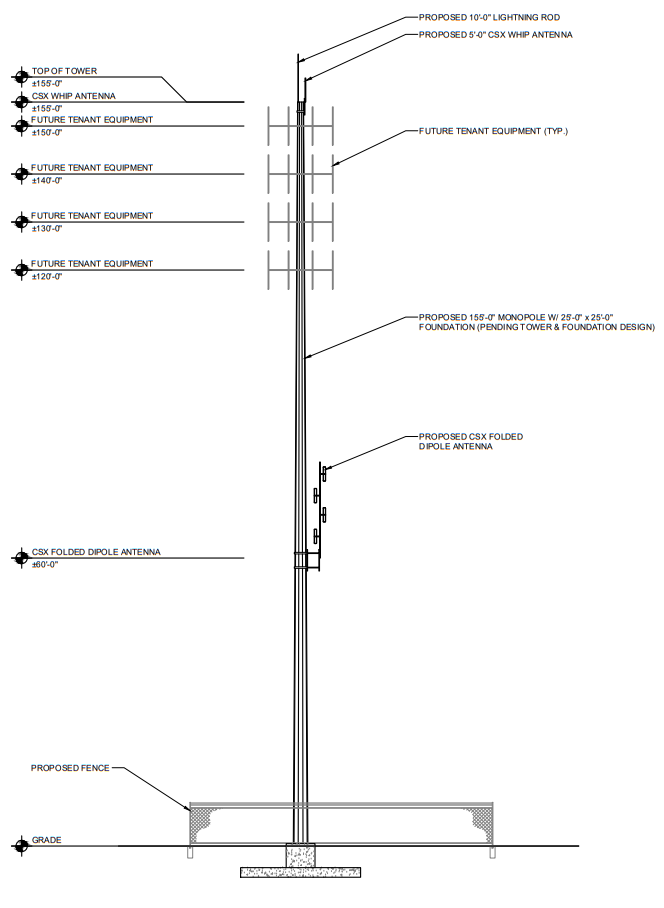 A schematic illustration of the proposed cell tower as seen in a consultant’s report.

The tower would be a single pole rising 155 feet and capped with a 10-foot-high lightning rod. It would occupy a 50-by-65-foot site whose fence would be topped with three strands of barbed wire. A new driveway would be created and some trees would be removed. It appears the tower would be used by CSX itself as well as renting antenna space to private cell phone and telecommunication companies.

For Section 106 review, the consultant examined historic properties within an “area of potential effect,” or “APE.” The report says there are no direct effects because the CSX property is not historic and test digging found no significant artifacts. But the review also accounts for indirect effects – in this case meaning visual impacts – within a half-mile radius of the tower. That area is roughly bounded by I-20 to the south, I-85 to the west, Irwin Street to the north and Pearl Street to the east.

RESCOM identified 11 historic resources in that area, including such icons as the cemetery and the King Historic District. The report says none of those resources would be adversely impacted and that the tower is “buffered” by various objects and sites – with the cemetery itself described as a buffer.

“Urban development, foliage, and topography will reduce visibility of the tower from historic sites within the APE, and the tower will be similar in design to existing telecommunications towers visible from within the APE,” the report says. “Therefore, the proposed project has no effect to historic properties located within the indirect Visual APE.”

RESCOM did not respond to questions about how it measured visual impacts and, specifically, how the cemetery cannot be impacted if it is serving as a buffer for someone else.

“I find it fascinating where we bury our dead and honor those gone before is now known as a buffer,” said Mitchell, the APC leader.

He blasted the claims of no visual impacts as defying common sense and criticized the minimal public input.

“Atlanta is not just a place for anyone to come and make money,” said Mitchell. “Atlanta is a place where people come to be part of something that you can’t experience anywhere else in this country. And it’s our culture and our identity that we are fighting tooth and nail to preserve.”

More towers on the way?

A detail of a map on the CitySwitch website with yellow dots showing sites “preapproved” for cell towers up to 195 feet tall.

The Boulevard tower site is just one of dozens across Georgia shown in a “portfolio” map on CitySwitch’s website. The map shows many sites as “preapproved” for towers up to 195 feet high, many of them “built to suit.” The tower sites are along railroad tracks operated by CSX and Atlanta-based Norfolk Southern Corp., which partnered in forming CitySwitch in 2004, according to the company’s website. Norfolk Southern did not provide comment for this story. According to the website, CitySwitch has a build-to-suit agreement with AT&T to expand its 5G wireless network.

The map shows some towers as already under construction, including two near Stone Mountain and one at I-85 and I-285 near Hartsfield-Jackson Atlanta International Airport. Other sites listed as “preapproved” include two within a mile of the Boulevard site and one within Emory University’s campus. Sites that are not near historic properties may have even less community or local government notice if any towers move ahead.

Possible tower sites on the map in Atlanta and the nearby metro area include: