A boom in truck traffic is expected by 2050 in metro Atlanta and North Georgia. Rail cargo also is likely to increase significantly, and with it congestion at grade-level intersections of train tracks and roads. 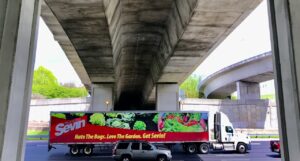 Truck traffic is expected to rise considerably by 2050 in metro Atlanta and across North Georgia. (Photo by Kelly Jordan)

One particular note: The I-85 corridor is the center of a big jump projected in facilities for manufacturing goods and agricultural production, and with them the need to move raw and finished goods. Counties on or near the highway, between state lines at South Carolina and Alabama, are forecast to rank in the top quartile for industrial growth.

Social dynamics also make an imprint on freight movements in the region, including E-commerce and residential infill in longtime industrial areas.

“We see that [E-commerce] as the new paradigm we’re looking at for trucks on our roadways,” said Jannine Miller, planning director at Georgia Department of Transportation. “More of the cargo that gets to households and businesses is flowing to destinations on freight vehicles, rather than in personal vehicles.” 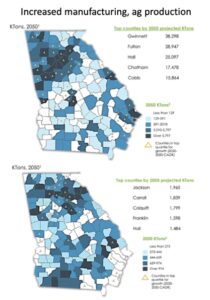 A surge in manufacturing facilities (top) and agriculture production (bottom) is expected to add to truck and rail traffic in metro Atlanta and North Georgia. (Charts by GDOT; image by David Pendered)

Northwest Atlanta is one place where tensions are growing between longtime industrial users and an influx of new residents. For 70 years, the area has been the city’s designated rail yard and industrial complex, located between Buckhead and the Chattahoochee River. Atlanta City Councilmember Dustin Hillis provided $12,000 from his office account to help pay for a city-led study find ways to reduce conflicts among users.

“We’ll look for the best ways to get to those industrial areas without barreling 18-wheelers through residential neighborhoods,” Hillis said Monday.

These circumstances have raised the profile of two major initiatives – updates of long-range plans to accommodate the freight and logistics sector, at the state and regional levels.

One is to be conducted by the Georgia Department of Transportation, the other by the Atlanta Regional Commission. Both agencies are in the process of hiring consultants to help oversee the two independent projects. Final reports are expected from GDOT by late 2022, and from ARC by mid 2023.

GDOT anticipates federal approval of its update in early 2023, by the Federal Highway Administration. ARC intends to complete its freight update in time for it to inform the 2024 Atlanta Region’s Plan Update, an ARC official said Monday.

The reality of freight movement is that trucks move most of the freight transported in Georgia – almost 82 percent of the total tonnage.

According to an analysis of figures Miller provided in her Sept. 16 report to GDOT’s board, the proportions in 2019 were: 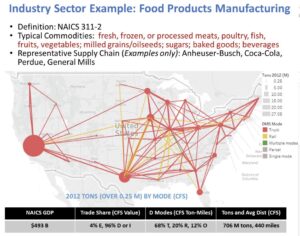 The orange lines show truck traffic, including the routes through Georgia that show the Macon area as a major transfer point for food products. (Image by GDOT)

These figures may evolve as Georgia’s inland ports offer an alternative method to reach the Port of Savannah. The idea is that freight will be shipped by truck to and from facilities in Cordele, Chatsworth and a planned facility in Gainesville. At these facilities, freight will be transferred to a rail car and delivered to or from Savannah.

Trucks also are the favored vehicle for transporting food products. Georgia is a pipeline for everything from beer to milled grains on the route between Florida and the Midwest.

The amount of truck traffic on I-75 prompted Georgia’s decision to plan construction of two non-tolled, truck only lanes for northbound vehicles between the areas of Macon and McDonough. The project is the preliminary engineering stage and the most recent update on the project is the virtual Industry Forum convened June 1. About 150 individuals signed the sign-in sheet, representing investors, contractors and consultants. 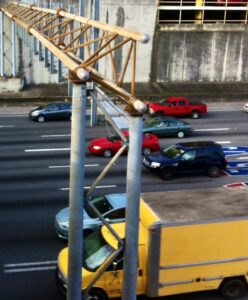 An increasing amount of products is expected to be delivered by small trucks as E-commerce deliveries rise in the future, GDOT forecasts. (Photo by Kelly Jordan) 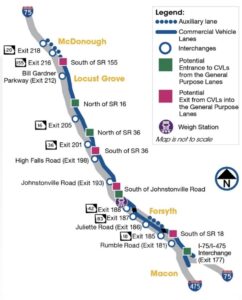 The evaluation of proposed truck-only lanes for northbound trucks along I-75 has advanced to the stage of preliminary engineering. (Image by GDOT)

Previous Article
Historical Commercial District and Georgia State University Converge at The Flatiron
Next Article
How Buckhead cityhood’s politics play into the Red-vs.-Blue battle of 2022