A string of narcotics arrests near Five Points last week, plus arrests for several outstanding warrants and the recovery of a stolen handgun, are among the latest examples of the challenges of sprucing up the city’s southern business district. 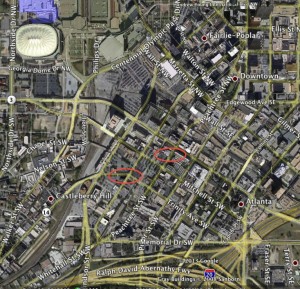 Atlanta police raided buildings south of Five Points in the areas identified by the red ovals. The address 90 Broad St. is near the center of the map; 155 Forsyth St. is below and to the left. Credit: Google Earth, David Pendered

This section of downtown Atlanta remains a place of competing objectives. The planned billion-dollar redevelopment of the gulch and neighboring area may spark a restoration of Atlanta’s historic urban core, even as an underground economy seems to thrive in the current environment.

The pedigree of one building where drug arrests were made highlights part of the economic tension. The building was purchased in 2009 for a sum higher than may be expected in the recession: 175 percent of the value assigned by Fulton County’s tax assessors.

Atlanta police made the arrests last week after running a number of operations in the area south of Marietta Street, according to police statements.

One shop police raided had food items covered in dust and long expired. Evidently those goods weren’t sold, and there was no mention of dust on bags of cocaine and marijuana allegedly kept in a box under the counter. Two digital scales were found next to the cash register, police said.

Here’s the statement police released about their March 1 raid at 90 Broad St.:

The pedigree of the building shows that Fox Market Realty Investments, LLC purchased the property in 2009 for $350,000. At the time, Fulton County appraised the property at $203,300 – the highest value recorded since 2009, records show.

Police made another string of arrests made Feb. 27 in the southern business district.