Georgians and residents of six other states want Congress to end its stalemate at least long enough to approve transportation funding before the existing pot of money runs out this summer, according to results of a poll released Wednesday. 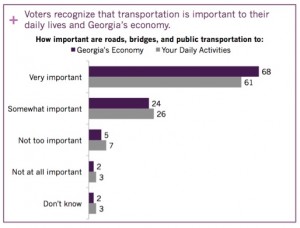 A majority of Georgia poll respondents say transportation is important to the economy and their daily lives. Credit: Purple Insights

The results could give federal lawmakers the political cover needed to provide federal funding for roads, transit and rail – a sector that historically enjoyed bipartisan support before gridlock reached its current state.

“People just want Congress to take action, and transportation is a no-brainer,” said Margie Omero, managing director of Purple Insights, the polling firm. “It’s not a partisan divide, at least among Georgians.”

The poll did not ask if respondents were willing to pay additional taxes or fees to provide transportation resources.

The poll of 500 Georgia voters was conducted Jan. 15-20. Two-thirds of interviews were conducted on a land-line telephone and the remaining third was conducted online – because the later group uses a cell phone for most or all calls. The poll has a margin of error of 4.4 percent.

Georgia’s Department of Transportation has set a July 1 deadline for approval of new transportation projects. Without the deadline, Georgia could end up approving projects in anticipation of receiving federal funding that may never materialize. 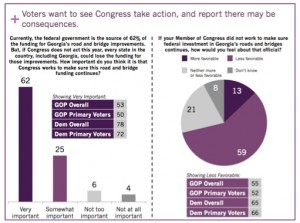 The Georgia General Assembly has formed a study committee to recommend ways Georgia can become more self reliant in terms of transportation funding.

Any relief the legislative committee can suggest won’t be implemented before the Georgia Department of Transportation has cut off all new projects unless Congress provides federal funding.

This poll has support from a wide array of advocates including:

Transportation advocates expect Congress to provide stop-gap funding before they recess in July. Then again – nothing’s certain, particularly in an off-year election cycle when the president’s approval ratings are at an historic low.

Last week, the Atlanta Regional Commission’s board voted to send a resolution to Georgia’s congressional delegation asking them to break the funding impasse.

The polling company, Purple Insights, was chosen specifically because it intends to be bipartisan, according to its sponsors, ARTBA and APTA.

The founders of Purple include Alex Castellanos, a Republican consultant and commentator, and Steve McMahon, a former staffer of Sen. Ted Kennedy who produced advertising to support President Obama’s 2008 campaign.

The other states where polls by Purple Insight found results similar to Georgia are Kansas, Louisiana, Michigan, New York, Ohio, and South Dakota.