Monday marked nine straight days in Atlanta of extremely high (over 1500) pollen counts. Even if you are the minority without a scratchy throat, runny nose or burning eyes, you can’t avoid the blanket of yellow green dust covering the city. 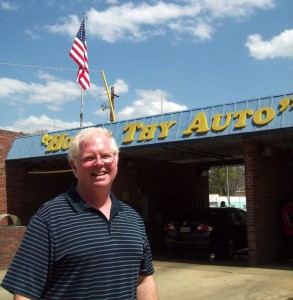 For Stuart Brady, the plague of pollen on our cars is almost a biblical call to atone through what his business serves: lots of water and your own elbow grease. At his Kirkwood Car Wash, three words preach from the shingled roof: “Honor Thy Auto.”

These days, the ka-ching of tokens and quarters in the self-serve machines is the reason Brady calls pollen “gold dust.” It also gives him hope that his slice of Atlanta might survive the relentless redevelopment that the city is known for.

“For those of us in the car wash industry, this is our best time of year,” said Brady, the owner since 1997. “It’s like Christmas and Hanukkah to us.”

Atlanta’s reliance on the automobile and its abundance of trees and flowers make it a good market for car washes. In a challenging economy, the self-serve car wash offers the best value for someone willing to put in a little muscle.

Even so, the Kirkwood Car Wash is one of the last of its kind in metro Atlanta, Brady says, and reviewers on websites like Yelp mention how hard it is to find one. It’s like the classic Volkswagen Beetle — a throwback. 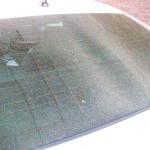 Pollen-covered windshield on April 10 at Kirkwood Car Wash. The pollen count was 4192 that day, according to the Atlanta Allergy & Asthma Clinic. Any count over 1500 is considered extremely high.

In his main work is as a business broker, Brady has sold a half-dozen coin-operated, self-service car washes like his, all of which were razed to make way for other developments. (You might remember the one at Clifton Road and DeKalb Avenue, now a development called Clifton Place anchored by a San Francisco Coffee shop).

Drivers are more likely today to wash off pollen at automated express car wash services. These typically take less time and don’t require drivers to get out of their cars, risk hosing soap suds on their suits or pay to use the vacuums.

“Express washes are relatively new and prolific in metro Atlanta,” said Brady, who lives in Druid Hills and has lived in Atlanta since age three. “As one customer said to me, ‘The $5 express wash is like the double cheeseburger at McDonalds: cheap and easy, but not exactly good for you or your car.’”

This month, the true believers and do-it-yourselfers showed up at the Kirkwood Car Wash to wash their cars and other possessions. The pollen helped bring out a funky vibe that you might recognize from the classic pop hit. There ain’t no telling who ya might meet….

“I like to come here because it’s cheap and it’s near my house,” said Elika Maserat, as she cleaned the pollen off her Acura TSX. 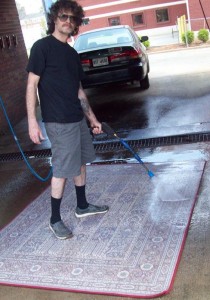 William Gantt cleans dog smell off a carpet at the Kirkwood Car Wash.

“I live on a street with two million-year-old year oak trees that have been dumping this stuff on my car all week. After I’m done, I just want to get back in my car, drive home and get back in my house.”

William Gantt and his son, Benjamin, came by not for their car, but a rug. Was it for pollen?

“No — dog smell,” William Gantt replied. “Why pay $50 for have this rug dry-cleaned when I can pressure wash it and hang it to dry?”

Other customers have washed their dogs there, patio furniture, lawn ornaments, bicycles and other possessions. They also leave souvenirs. On his website, Brady posts pictures of “Things I Found at the Car Wash,” including a Halliburton steel briefcase, a vintage Corningware coffee pot and a coconut carved into the shape of a head.

The latter two items Brady hung from utility poles onsite, near a payphone he repurposed into a flower planter. From his prominent spot on Oakview Road, he keeps the intown hipster vibe going by advertising and serving as host for the annual Kirkwood Wine Stroll in September. Last year, 700 wine aficionados enjoyed a series of 22 tastings, with a side of karaoke at the car wash.

No marketing is needed during pollen season. For those who want a closeup of the enemy, Brady posts microscopic photos of pollen on his blog and website. The microbes resemble the head of a medieval flail, the round spiked weapon.

To deal with those prickly grains, Brady advises drivers to first presoak and high-pressure wash  from the top of the car down, then “ooh la la” waxing from the bottom of the car up. 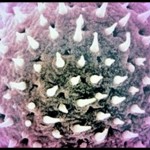 Two contract attendants are on duty at the car wash, and one will wash the car while you shop or chill in Kirkwood. Brady is also there for several hours a day, promoting the do-it-yourself cleaning that is a form of therapy for some car owners.

“Have you looked up close at pollen through a microscope?” said Brady to customer Jessica Bell. “It has little tiny barbs in it.”

Record pollen counts tallied a year ago in metro Atlanta are partly responsible for the 15 percent bump in business Brady enjoyed at the end of 2012, he said. If the daily throat-chokers keep up, 2013 could also be far better than a wash. 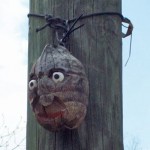 Found at the car wash.

Since April 6, there have been nine straight days of pollen counts in the “extremely high” range, according to the Atlanta Allergy & Asthma Clinic. That’s more than half as many as were recorded in 2012. And the season isn’t over yet.

But Brady knows he has to work harder than the competition to squeegee the most he can from this time of year. Economic survival isn’t just about bringing in customers, it’s about educating them. The antidote to an impersonal express wash is face-to-face time at the car wash.

To help Bell get her car get to an extra level of clean, he happily reaches into his own pocket for tokens.

“If I can actually show them how to do it,” he said, “they are more likely to come back.”  Even when pollen season is over.

Previous Article
Falcons stadium: An uphill fight to right a community beset by wrongs
Next Article
Reporting vs. Writing