Atlanta-based Portman Holdings has lost its bid to lead the master development team for the planned $1 billion upgrade of what is to become the 52-acre Miami Beach Convention Center district. 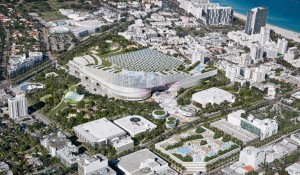 This is the revised aerial plan for the Miami Beach Convention Center district, as presented by Tishman South Beach ACE. Credit: City of Miami Beach

The project went instead to a team led by Dan Tishman, the New York-based developer of projects including the World Trade Center and Disney’s Epcot Center. The Miami Beach Commission voted July 17 for Tishman’s proposal, submitted as Tishman South Beach ACE.

The Miami Beach project is that city’s version of Atlanta’s deal for a new Falcons stadium. Both projects are priced around $1 billion; both call for public financing through a hotel/motel tax; both contemplate renewing part of an aged urban core; and both promise to reconnect the new developments with surrounding communities.

While the team in Miami Beach has been selected, the project still is uncertain. Miami Beach voters face a referendum in November on whether to approve $600 million in that city’s version of the hotel/motel tax to pay for upgrades to, and around, the city’s signature facility – home of events such as Art Basel Miami Beach and the South Florida Auto Show, and institutions such as the Jackie Gleason Theater.

Portman appeared to be an early front-runner. The company made the short list of two competing companies, which were culled from the initial seven proponents who submitted in April 2012. Portman also had the support of the convention center’s advisory board, the South Florida Hispanic Chamber, and other influential figures.

Portman’s bid was lower than the Tishman deal, by nearly $60 million. Portman’s plan would have been built more quickly and with less local impact, provided greater ground lease revenues than Tishman’s offer, and provided $25 million in long-term funding for the arts, according to the comparison of letters of intent provided by Miami Beach and information from Portman’s website.

Portman even had sought in the final hours to strengthen its financial position.

Two days before the commission vote, Portman’s team announced that it was partnering on the project with Ares Management. Ares is a $65 billion global alternative asset management firm and it controls a real estate division with an $8 billion portfolio, according to a statement released July 16 by Portman.

But in the end, Miami Beach voted 5-2 for Tishman’s offer. Mayor Michael Gongora said the decision had caused him sleepless nights, according to a snippet of the meeting that aired on nbcmiami.com.

“Neither of the developments seem perfect,” Gongora said. “There are things I like better about both of them.”

A report posted on nbcmiami.com reported this statement from Tishman, a principal with the team named South Beach ACE:

The project’s next phase involves the negotiation of terms with the developer.