Atlanta-based Post Properties has sold its Renaissance community in downtown Atlanta for a price that exceeded the company’s expectations. 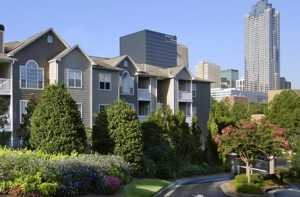 The sales price was a bright spot in a quarterly report released Wednesday that showed the company’s revenue forecast has slowed more than expected. The decline prompted the company to reduce rents in order to maintain occupancy rates going into winter, though evidently not in the Atlanta market because leasing here remains strong.

Post CEO David Stockert said in a conference call the company is “thrilled” with the outcome of a bidding war that broke out for Post Renaissance. Nine offers were submitted and the winner emerged from a final round that included three bids. The buyer’s name was not discussed in a conference call Wednesday.

“It’s in excess of what we expected,” Stockert said. “We’re very pleased with it.” 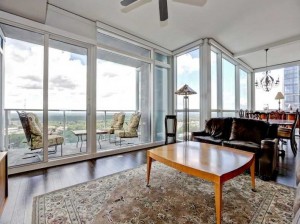 Post Renaissance opened from 1992 to 1994 within walking distance of the Bousfeuillet Jones Atlanta Civic Center. At the time, expectations were high that this area was poised for a revival. The community opened with Post’s trademarks of luxurious landscaping, pools, and picnic areas with gas grills.

Today, the property has an economic occupancy rate of 96.3 percent with a monthly rental price of $1.23 per square foot. Post Renaissance was one of the older in Post’s Atlanta portfolio of 17 properties, most of which were built in the mid to late 1990s. Post Renaissance has 342 units, with an average size of 914 square feet.

The company expects to record a gain of about $28 million in the fourth quarter.

At its signature Ritz-Carlton Residences development, near Phipps Plaza, Post reported it has closed on 42 units this year, 12 of them in the third quarter.

One unit remains available in the project that opened for sales in the teeth of the recession, autumn of 2010: A three bedroom, 4.5 bath unit with 4,450 square feet on the 32nd floor. The asking price was not disclosed on the sales website, but comparable units have been priced above $2.3 million, according to MLS data. 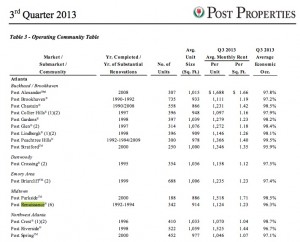 Click on the image for a larger version. This data sheet for Post’s holdings in Atlanta shows Renaissance was an older, lower performing property. Credit: Post Properties.

The sales report shows a third of the total units available were sold this year:

Stockert said Post sees no change in the fundamentals of the rental apartment industry. Trends he sees include slowing apartment construction, rising prices in construction, and the continuing pent-up demand to form households.

Post is not planning to repurchase stock at this time, Stockert said. The company is focused on managing costs and cash flow, he said.