Three measures approved by the state Legislature this year are triggering concerns among members of the Atlanta City Council – a study committee to evaluate the state takeover of Atlanta’s airport; a call for Atlanta to permanently close a portion of Mitchell Street adjacent to the Capitol; and carving out a piece of Stockbridge to create a City of Eagle’s Landing. 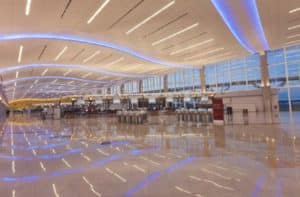 A state Senate committee is to evaluate a potential state takeover of Atlanta’s airport. File/Credit: abl.internationalsales.com

The city government has long had a rocky relationship. But these measures seem like a poke in the eye to some council members who remember taking the heat to provide funding for the Mercedes Benz Stadium.

“When things went south at the state Capitol, we took on the Mercedes Benz Stadium,” Councilmember Cleta Winslow said. “There was a $200 million project, not even in our baliwick. The state was to provide for football and were to provide for baseball.”

Winslow spoke Wednesday during a meeting of the council’s Finance/Executive Committee. Winslow was referring to a 2013 deal that likely salvaged the funding package for the stadium.

At the time, most Republican lawmakers didn’t want to approve state funding for the stadium. Then Mayor Kasim Reed and Gov. Nathan Deal reached an agreement for the city to provide an amount that proved to be $200 million from the city’s hotel/motel tax to back bonds sold to help pay for construction.

Reed was an outspoken advocate for the proposed stadium. The measure moved so quickly that the Atlanta City Council approved the funding legislation while it remained pending before a council committee.

Here’s a look at the three measures causing concern: 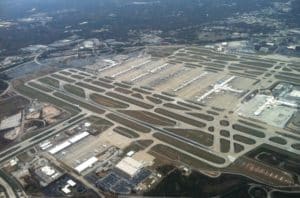 Atlanta’s airport is a major development now undergoing a $6 billion expansion project as part of its 20-year effort to remain a leading international airport. File/Credit: skyvector.com

The resolution states, in part:

The resolution calls for the Senate president to appoint 13 senators to serve on the committee, including five Democrats. The committee has a Dec. 1 deadline to submit any recommendations for legislative action in the 2019 session. 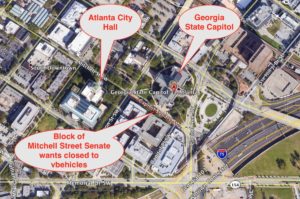 Senate Resolution 537 was signed by the governor and concludes:

“BE IT RESOLVED AND ENACTED BY THE GENERAL ASSEMBLY that the City of Atlanta property consisting of that portion of Mitchell Street between Washington Street and Capitol Avenue shall be closed to unauthorized vehicular traffic.”

Stephanie Grant, a lawyer in the city’s Law Department who represents the Department of Public Works, told the committee that the city’s view of the 1953 legislation is different from the Senate’s view.

“They said back in 1953 [legislation] was introduced to give the state all property in Capitol Square,” Grant said. “Our review did not support that contention.”

Other issues Grant cited include SR 537 does not provide any compensation to the city for closing this portion of the street; it does not define “unauthorized vehicular traffic;” and the state has made no effort to list Mitchell Street among the roads under the jurisdiction of the Georgia Department of Transportation.

Carve up Stockbridge to create City of Eagle’s Landing 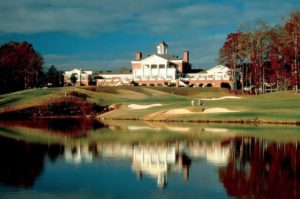 The plantation-style clubhouse at Eagle’s Landing Country Club is a popular venue at the heart of the proposed File/City of Eagle’s Landing. Credit: elccprivateevents.blogspot.com

Moody’s Investors Service issued a report this week stating the credit quality of all cities in Georgia is threatened by the proposal to carve land out of Stockbridge to create a City of Eagle’s Landing, .

The problem is that Stockbridge will remain obligated to pay its existing debt even though its tax base is substantially smaller than when the bonds were sold. And because this situation was created for Eagle’s Landing, the precedence is set for other cities to lose portions of their tax base to create new cities, analysts observed.

Councilmember Natalyn Archibong called on the city’s Law Department to monitor the situation and be prepared to file legal papers in any potential lawsuit. Archibong said she wants clarity on the question of whether it’s up to the mayor’s office or the council to initiate a potential intervention in any lawsuit.

Councilmember Andre Dickens observed that the city should consider the potential impact of filing a friend of the court brief in any possible litlgation.

“I don’t know if our involvement would help or hurt,” Dickens said.