Discussion of poverty and the lack of mobility in U.S. suburbs, particularly in Atlanta’s suburbs, seems to be hitting a new high.

Just last week, a speaker from the Brookings Institution named three primary causes of the spike in poverty rates in Atlanta’s close-in suburbs: The foreclosure crisis; shortage of transit to reach jobs; and housing vouchers that facilitated a move from the inner city to communities with smaller safety nets. 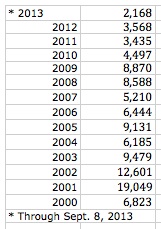 For Kim Anderson, the CEO of Families First who was on the panel with Alan Berube, of Brookings, the spread of poverty raises one troubling question: “Are we going to repeat what we did in the urban community in the suburban communities?”

Anderson said during the Atlanta Regional Housing Forum that Families First has already seen the signs of growing troubles:

Anderson’s third point is the subject of a report that’s received scant attention but outlines a troubling future as poverty spreads beyond the safety net established over the past 70 years: Being poor contributes to a lack of cognitive ability to address life’s challenges.

The study was reported in Science magazine and picked up by The Atlantic Cities, which summarized the findings in this sentence:

The study determined that the overload caused by poverty is comparable to losing 13 IQ points, or roughly the difference between “chronic alcoholics and normal adults,” according to the article in The Atlantic Cities. The study was conducted by researchers at Princeton and Harvard universities, and the University of Warwick.

The great recession clearly has focused attention on income and wealth.

Pew Research Center, just this year, has provided a steady stream of reports on topics including the rise of disadvantaged single fathers; the four-fold increase since 1960 of mothers who are the sole or primary breadwinner; and the growing wealth disparity between rich and poor as stock values rise while housing values remain (generally) flat.

For all the recent attention, job loss – if not actual poverty – has been a fact of life in metro Atlanta since well before the recession.

More than 100,000 jobs have been lost due to business closures or layoffs in the time from Jan. 1, 2000 through Sept. 8, 2013, according to figures kept by the Georgia Department of Labor.

Perhaps the loss of these jobs has simply been under reported. More likely, job loss has made the news when a significant number of jobs are lost all at once and the closure of a factory or a mass layoff is reported. And new jobs have been created around the region.

But the collective impact so far this year includes airlines that have shed more than 700 jobs in Atlanta, and Lockheed Martin Corp., which has cut 500 workers in Marietta, according to the GDOL web site.