Before dawn Sunday morning, police said, a dog woke up his sleeping family in Lawrenceville and saved them from a fire.

At dusk the same day, 75 people gathered on a church lawn near Emory University to celebrate their pets. 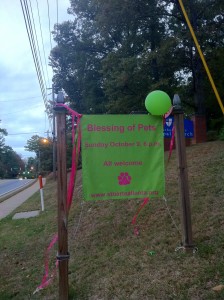 In early October, local churches celebrate St. Francis of Assisi, the patron saint of animals, with services such as this one at St. Bartholomew's Episcopal Church near Emory University (Photo by Michelle Hiskey)

Sunday marked the Feast of St. Francis of Assisi, the patron saint of animals. Even if you don’t believe in saints or God, you should appreciate them as a symbol of living simply, with love and forgiveness.

Four days after the passing of Steve Jobs, eulogized as bringing simply powerful connectivity to our outstretched hands, Christians marked a simple man from eight centuries ago who brought new spiritual power to his world by simply embracing all creatures as brothers and sisters.

Can our pets teach us how to live more simply in these complicated times? This was my question at the Blessing of Pets at St. Bartholomew’s Episcopal Church, the one day our dog Cleo can worship there with us.

Buddy, a Chihuahua/Jack Russell/pug mix, reminds Eric Still and Dan Treadaway that they have the power to reach out and help. By doing so, they help themselves. 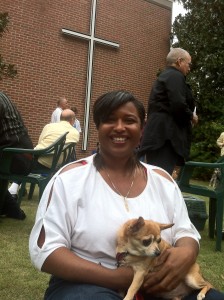 Jameelah Ferrell with Angel, her chihuahua, at the Feast of St. Francis of Assisi (Photo by Michelle Hiskey)

“This is what I can do to take care of this animal who had no home,” said Still, who adopted Buddy six years ago from the Fulton County pound. “We are blessed to have Buddy, who brings a lot of joy to us.”

Una, a dachshund, “makes me realize all my stuff isn’t that important,” said 13-year-old Cameron Driskell, who goes to Sutton Middle School. “When she rips it up, I don’t care.” Love 101, taught by a weiner pup.

Angel, another Chihuahua, came into Jameelah Ferrell’s life with a message from above.

Ferrell lives by herself, and after her previous Chihuahua was fatally struck by a car, Farrell became so depressed she sought counseling. In her grief, she answered an online ad for an unwanted Chihuahua.

“She was already named Angel, and that’s what she was to me,” Ferrell said.

The schnauzer and sharpei, the yorkie-poo and cockatoo, peacefully coexisted as two female priests petted and blessed them.

The Rev. Beverley Elliott of mostly-white St. Bart’s was joined by The Rev. Nikki Matthias of mostly African-American St. Paul’s Episcopal in southwest Atlanta. The churches are cross-pollinating with events like this, as a way of celebrating and bridging differences as St. Francis did. 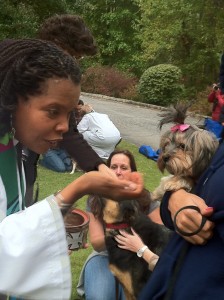 Matthias’ sermon was bittersweet, as she recently lost her terrier mutt Crystal at age 15. No matter how what, Crystal always greeted her with “the excitement of Zephaniah 3:17,” Matthias said, referring to her favorite Bible verse that promises God will be excited and rejoice over His children.

“All of you know something about the revelation of the goodness of God through living with the gift of your pet,” Matthias preached.

The animals’ state of simplicity unleashed them from church etiquette. There was peeing during the scripture readings and jumping at communion wafers. A husky howled during Psalm 148: “Give praise to all four-legged and all that creep on the ground.”
v. Elliot, noticing dogs sniffing each other’s back ends, remarked: “The passing of the peace is different with animals, isn’t it?”

Sallie, a black pug, left her own offering on the lawn as the service opened. Only 6 months old, this was her first St. Francis Day, but her owner’s latest reminder of the importance of companionship.

“I’d been without a dog since January, and when I got Sallie two weeks ago, it was amazing to me the immediate companionship and company she was,” said Joan Payton of Buckhead. “I really got in touch with that, and that was special for me.” 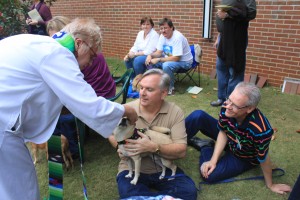 Following the service, a reception with finger foods and dog treats drew a St. Francis look-alike and his canine pal.

Wearing a black habit and cross, John Agel is a brother in the Order of St. Anthony the Great, a Celtic-rooted group that focuses on contemplation and service to others in an urban setting, connecting people who don’t feel welcome in traditional churches because of class, race, gender and sexual issues.

In Agel’s hand was a leash patterned with the Episcopal seal, attached to a matching collar on his perky Lab chow mix Faldo, his fur as black as Agel’s frock.

Agel adopted Faldo right when he decided to settle down from a career in professional golf and other pursuits. Faldo had been abandoned at a veterinarian, and his name was more spiritual to Agel than athletic. 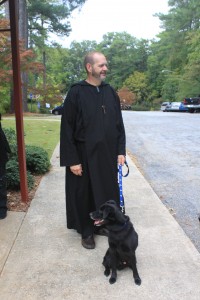 John Agel, a brother in the Order of St. Anthony the Great, with rescue dog Faldo at Sunday’s Blessing of Pets at St. Bartholomew’s Episcopal Church (Photo by Vickie Berg)

Before Sir Nick Faldo won the Masters three times, “the British media abandoned him in ridicule and scorn and called him ‘El Foldo,’ before he came back as the greatest player of his generation,” said Agel, who has a blog. “My dog Faldo has given me a new life too.”

Agel laughed at the comparison to St. Francis (“before his weight loss program”). No doves alighted on his shoulder, no fawns trotted at his side, but his kind demeanor reminded me of this saint’s simple, profound life.

Even today, St. Francis’ prayer sums up how our pets show us how to live and love:

“Grant that I may not so much seek
to be consoled as to console;
to be understood as to understand;
to be loved as to love.
For it is in giving that we receive;
it is in pardoning that we are pardoned;
and it is in dying that we are born.”