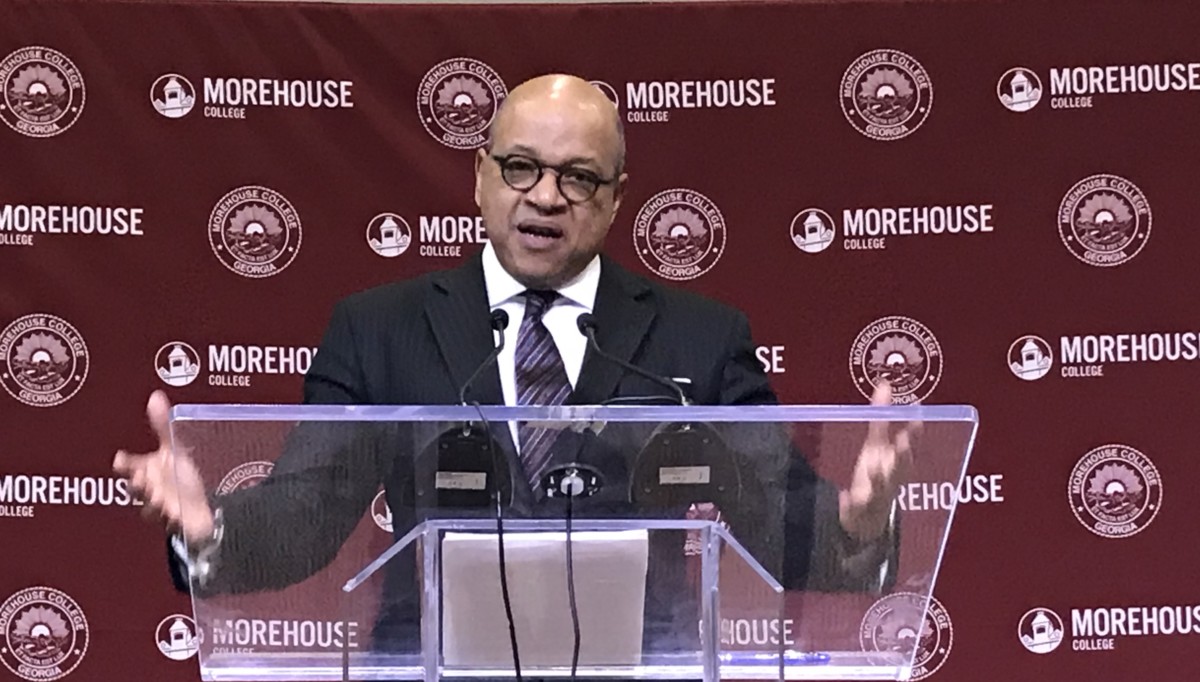 If he has his way, David Thomas will be president of Morehouse College for at least a decade.

Just two weeks ago, Thomas became the 12th president of Morehouse, a college steeped in 150 years of world-changing history.

The significance of the position was not lost on Thomas, who had a session with members of the press on Jan. 12. 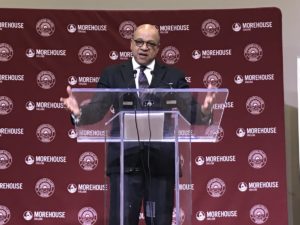 Thomas quoted his brother who told him: “This is surreal. You are president of Morehouse.”

When Thomas was named president in October, he said that ever since he was 10 years old, his ambition was to go to Morehouse. When he was graduating from high school, he applied to two colleges – Morehouse and Yale University. Thomas was accepted to both – but Yale offered him a scholarship that covered his entire tuition plus room and board. Morehouse had no scholarship to offer.

So 50 years later, Thomas is making it his mission that other young black men do not suffer his fate. If a qualified student wants to go to Morehouse, Thomas wants to be sure the historically-black university for men will be able to offer a competitive scholarship.

“We will need to do the work to garner more resources for Morehouse,” Thomas said. “We will have a capital campaign historic in its proportions and ambition. First and foremost, (the campaign) will be for scholarships. If I’m blessed to be here for 10 years, there will be no more David Thomases.”

(Thomas ended up having an illustrious academic career – attending Yale and Columbia University. He later did two separate stints at Harvard University – including his most recent post as a professor at the Harvard Business School. He also served as dean of Georgetown University’s business school and as an assistant professor at the University of Pennsylvania’s Wharton School of Business).

“I’m supposed to be here in this season of my life,” Thomas said. “I left a very cushy job to come here.”

So how big a capital campaign would Thomas like to launch?

“It’s always a little dangerous to put out numbers,” said Thomas, adding the goal would be at least $250 million and could be as high as $500 million. “It would be the largest campaign in the history of the school.” 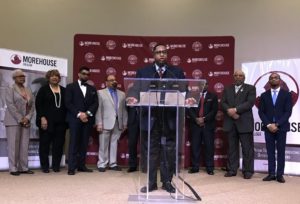 The last major campaign was completed in 2010 – raising a record $118 million.

When asked about the college’s endowment, Thomas was equally ambitious.

“I would like to see us in the next seven years with an endowment in the neighborhood of $300 million and $400 million. We are roughly at $140 million,” Thomas said, adding that “every liberal arts college in the country is stressed.”

Again, Thomas is setting a high bar – and certainly acting as though he is beginning a long tenure of the historic college.

But Morehouse has had a tumultuous decade with relatively short tenures for the past two permanent presidents – Robert M. Franklin and John S. Wilson. The College, in June, also suffered from the tragic sudden death of William Taggart, who had been named the interim president last April after serving as Morehouse’s chief operating officer for two years.

Much has been reported about the tension that existed between a divided board and the past two presidential administrations place over the past decade.

Thomas said the relationship between the board, the faculty and the staff “is the glue that holds this institution together,” and then he added: “that relationship is aided by transparency.”

Then Thomas explained that the board has gained insights in the past several years, and there also has been a transformation in board leadership. He implied that there is now a clearer understanding of the separate roles of the board and the administration. 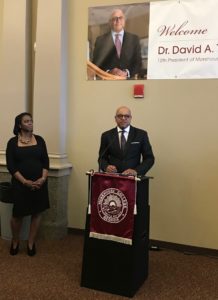 But he admitted “there has to be a healthy and natural friction” between the two – like the relationship between landlords and tenants.

The secret to success will be a shared governance structure that includes the faculty, executive leadership and the board as well as students, and “making sure all those voices are heard.”

Billye Aaron, a member of Morehouse College’s board of trustees, said she has been impressed by Thomas.

“I think we are off to a very good start,” she said. “I’m optimistic that we start anew with great leadership.”

When asked about Franklin, Wilson and Taggart, Aaron gave a soothing view of the past.

“We have to look at what each one brought to the institution,” she said. “I think all of them made a contribution in their own way.”

And it’s important for the board and the administration to have a clear understanding of the responsibilities and expectations each of them bring to the table.

Aaron said she is looking forward to Thomas’ leadership and agrees with his expectations. “I think all of the board members are excited about the potential we find here,” Aaron said.

Thomas is the first non-Morehouse alum to become president since Benjamin E. Mays, who was president from 1940 to 1967.

“Dr. Mays established the Morehouse mystique, and he created the whole idea of making the Morehouse Man – to become a leader in the world,” Aaron said.

One of Mays’ protégés was Martin Luther King Jr., the civil rights leader who continues to have a strong legacy at Morehouse College. 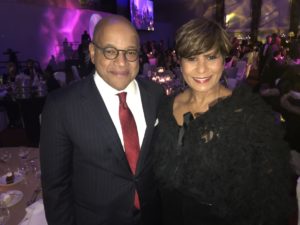 David Thomas chats with Justine Boyd, who is with the United Negro College Fund, at the Salute to Greatness dinner (Photo by Maria Saporta)

Thomas, who attended the King Center’s Salute to Greatness dinner Jan. 13, said Morehouse has a responsibility to live up to King’s teachings.

“The King legacy can’t be uncoupled from Morehouse,” Thomas said. “The collection of his papers is here.”

But Thomas said he would like to see Morehouse to become “more intentional” about how the King legacy is imprinted in the college’s DNA by understanding the notion of a beloved community, being a drum major for justice and being involved in social advocacy.

Thomas plans to play his own role in building the community by becoming involved with the Westside Future Fund and seeking ways to have Morehouse become more involved in helping revitalize the neighborhoods around the Atlanta University Center.

One opportunity would be to build senior housing near the colleges and welcome more residents to the area.

“It’s very clear to me there are opportunities related to the community’s health,” he said. “We can strategically join in the development efforts…and explore opportunities on how the universities can serve communities.”

Then Thomas added: “There are lots of opportunities. And I don’t lack imagination.” 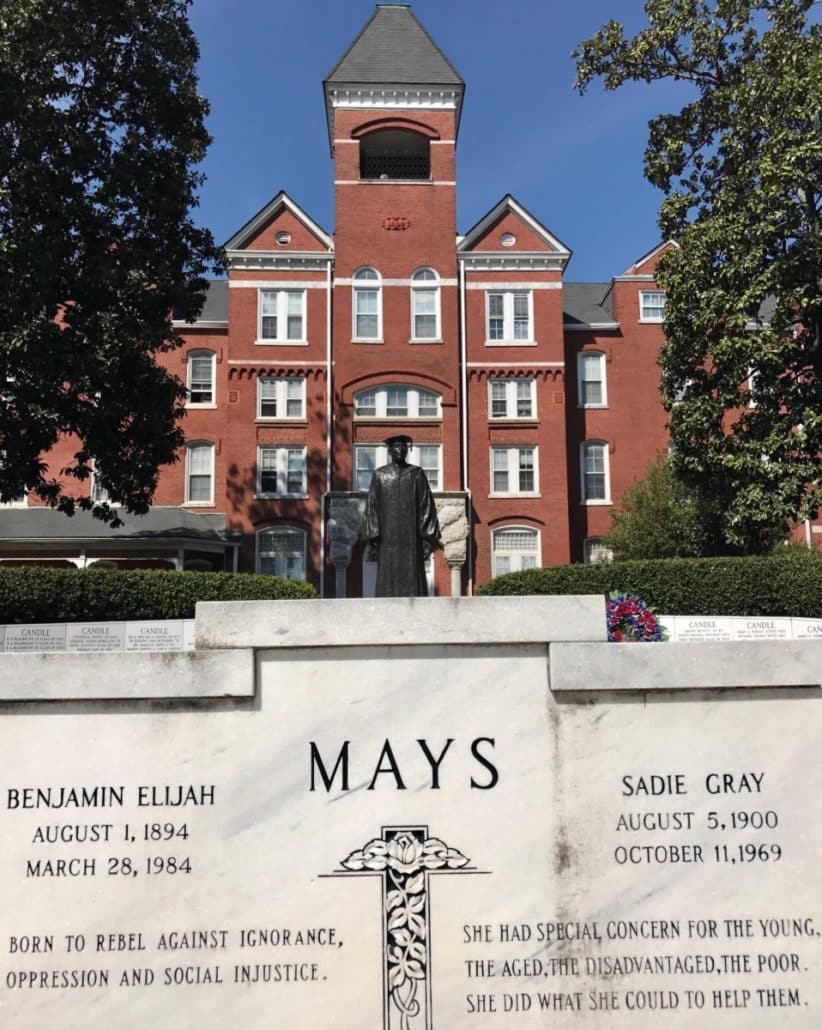 In honor of Benjamin E. Mays, who was president of Morehouse College for 27 years (Photo by Kelly Jordan) 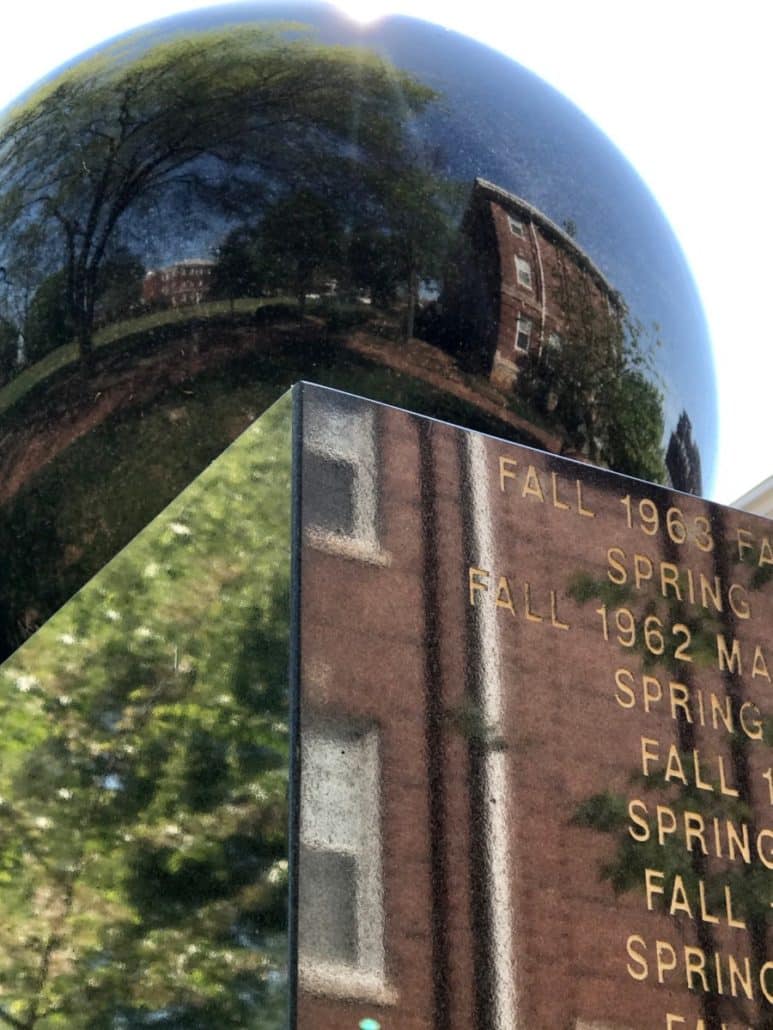 A reflective view of Morehouse College (Photo by Kelly Jordan)