At long last, we have a president who understands the value of rail – both for passengers and freight.

President Joe Biden attended the 50th anniversary of AMTRAK in Philadelphia on April 30 when he eloquently spoke about the need to build out our nation’s rail infrastructure. 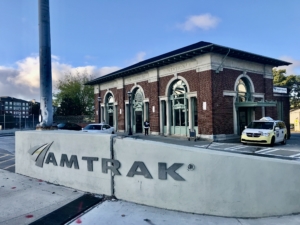 The message is particularly relevant to Atlanta – a city created as a junction of three rail lines. AMTRAK recently released plans to significantly improve its Atlanta service as part of Biden’s proposed infrastructure plan.

“Today we have a once in a generation opportunity to position Amtrak and rail and inner-city rail…to make investments that can help America get back on track, no pun intended,” Biden said during the AMTRAK event.

“This would allow for the potential to expand passenger rail service. Imagine a two-hour train ride between Atlanta and Charlotte going at speeds of 220 miles per hour.” 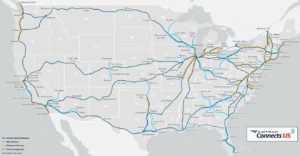 Metro Atlanta would benefit greatly under AMTRAK’s proposal to expand its service as part of the Biden infrastructure plan (Special: AMTRAK)

Transportation officials in metro Atlanta and Georgia must seize upon the opportunity presented by the Biden administration to finally invest in our rail infrastructure. After several administrations that favored road-based investments, such as bus rapid transit, we now have an opportunity to have a more balanced transportation network that includes rail with all of its inherent advantages.

“We’d be crazy as a region if we didn’t try to figure out ways to take advantage of the pro-rail administration in Washington right now,” former MARTA Chairman Robbie Ashe wrote in a text. “Some obvious projects that would qualify are Campbellton Road, the BeltLine, and the Clifton corridor.”

Biden, who has been riding AMTRAK between Washington, D.C. and Delaware for decades, clearly understands how rail should be part of our future.

“I’ve come to see that AMTRAK doesn’t just carry us from one place to another, it opens up enormous possibilities, especially now,” Biden said. “It makes it possible to build an economy of the future. Last week I announced the target of cutting greenhouse gases and gas emissions in half by 2030, and most of those emissions in this country come from transportation.” 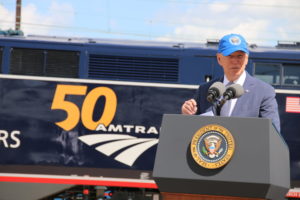 Biden said that if just 10 percent of the freight shipped went by rail instead of by trucks, it would be equivalent to removing 3.3 million cars on the road or planting 260 million trees.

Atlanta is now home to Norfolk Southern, one of the largest railroads in the country. Could Biden’s infrastructure plan present an opportunity for the federal government to invest in improving privately-owned rail lines in exchange for allowing passenger trains along those corridors? That could include removing at-grade crossings or double-tracking so there could be improved service for both freight and passenger trains.

Biden said our infrastructure is what will allow the United States to compete with the rest of the world.

“To win the 21st century, we’ve got to move. China already has 23,000 miles of high-speed rail going at 220 miles per hour,” Biden said. “We’re behind the curve. But folks, as I said the other night. America is on the move again. We need to remember that we’re in the United States of America, there’s nothing beyond our capacity, nothing we can’t do if we do it together.”

The same is true of Atlanta and Georgia, but only if our leaders seize on the opportunity for rail transportation. 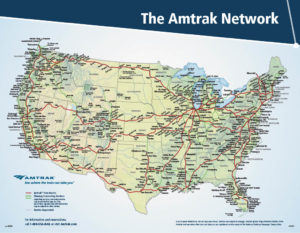 Take AMTRAK’s proposal to expand service in Atlanta. We would need a central connecting place for those rail lines to converge – just as they did when Atlanta was founded. The railroad gulch has long been envisioned to be the site of a multimodal station. But the developers who own the gulch (CIM Group) have yet to commit to including a grand central station in their plans.

Metro Atlanta leaders also have seemed set on taking the cheap route – investing in bus rapid transit – rather than rail. Think the Summerhill BRT route. Some people are even proposing putting BRT on the Atlanta BeltLine. And what is the status of the all-important commuter line to Clayton County? Will that be commuter rail or BRT? Sadly, the Georgia Department of Transportation and several cities in North Fulton seem intent on investing in buses rather than expanding the MARTA rail line up Georgia 400.

Yes, BRT may be cheaper initially. But it does not have the long-term benefits of rail – which supports transit-oriented developments around stations rather than perpetuating the sprawling car culture we currently have.

The Biden administration offers metro Atlanta’s government and transportation leaders an opportunity to pivot away from BRT to rail transit.  Let’s envision how rail can carry us into the future.