Atlanta’s Office of Cultural Affairs would be moved into the mayor’s office under a proposal now pending before the Atlanta City Council. 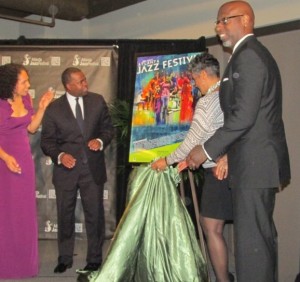 Atlanta Mayor Kasim Reed and Alexandra Jackson (both left) respond to the unveiling of the poster for the 2013 Atlanta Jazz Festival. Credit: rollingout.com

The office currently is located in the city’s Department of Parks, Recreation and Cultural Affairs. The office is headed by Camille Russell Love, who reports to parks  Commissioner George Dusenbury. Dusenbury reports to Atlanta COO Duriya Faroqui, who reports to the mayor.

Reed is an outspoken advocate of public arts programs and has provided city funding for the arts despite the recession. The Office of Cultural Affairs oversees Atlanta’s most prominent arts programs, including the 36th Annual Atlanta Jazz Festival – for which Reed hosted a preview party at Loews Hotel.

Reed said in a letter contained in the FY 2012 annual report from the Office of Cultural Affairs:

The department’s $3.6 million budget includes almost $1.9 million from the city, according to the annual report.

Details of the proposal to relocate the department into the mayor’s office are scarce. The legislation has yet to be posted on the council’s website. 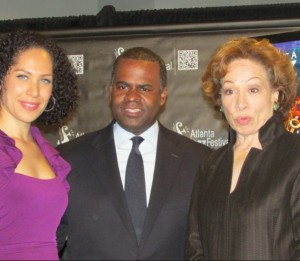 Councilmember Felicia Moore chairs the Finance Committee and showed her independence from the administration during the 2011 debate over pension reform. In the end, the administration and council united on an agreement to reduce the city’s exposure to the pension plan.

The Office of Cultural Affairs was created in 1974 by Maynard Jackson, who clearly made it a priority after his election in 1973. The office’s initial mission, which was to support the city’s cultural resources, has expanded over the years. The office now oversees Atlanta icons including:

Reed is a regular presence at the city’s arts events. In March, he led the unveiling of three new sculptures in Freedom Park. The sculptures were donated by Chicago’s Millennium Park and internationally renowned Mexican contemporary sculptor, Yvonne Domenge.

“There is no question that the leading cities of the world invest significantly in arts and culture, and Atlanta should be no different,” Reed said in a statement released after the event. “We thank the artist and the directors of Chicago’s Millennium Park for facilitating this wonderful gift, a true representation of our city’s cultural relationships both nationally and internationally.”