A border dispute appears to be breaking out in DeKalb County, involving Brookhaven and two cities that haven’t even been incorporated. 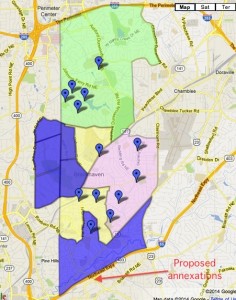 Brookhaven would expand south of I-85 if its approves annexation requests submitted by Children’s Healthcare of Atlanta and Executive Park. Credit: brookhavengeorgia.org, David Pendered

The issue is the tax base represented by two tracts of commercial land whose major players have requested to be annexed into Brookhaven – Children’s Healthcare of Atlanta, and Executive Park.

Two proposed cities, Lakeside and Briarcliff, have included property taxes from this area in their budget considerations. The future competitors are now aligned against a common foe.

In addition, the situation presents the latest twist in the evolution toward municipalization in metro Atlanta, particularly in DeKalb and Fulton counties – where six cities have been formed since 2005.

If the annexation is approved, Brookhaven would cross south of I-85 to pick up two significant commercial districts that flank the highway access road. I-85 is now the southern boundary of Brookhaven, and its northern boundary is I-285.

CHOA is leading the annexation effort in the section in the northeast quadrant of I-85/North Druid Hills Road, involving Tullie Road and Tullie Circle. Executive Park, the office development, is leading the effort involving its office park, which at one point the Sembler Co. envisioned renovating into a development of homes, shops and offices.

Brookhaven responded Tuesday by releasing a statement saying the annexation requests are complete and that DeKalb County has been notified:

This is not the response that cityhood advocates hoped for after issuing their Oct. 9 statement, which included the following remarks:

The referendum could be on a ballot in 2015.

For that to happen, one or more DeKalb lawmakers would have to file legislation to allow voters in the proposed City of Lakeside and City of Briarcliff to vote on cityhood. How quickly the cityhood bills could be passed by the House and Senate, and be signed by the governor, is a matter of conjecture.

The phenomenon of municipalization has been steady since 95 percent of voters in Sandy Springs voted to form the city in 2005.

North DeKalb was quick to follow suit. Dunwoody was formed in 2008, and Brookhaven was created in 2012.

A larger version of the proposed Lakeside map is at http://lakesideyes.nationbuilder.com/city_map

A larger version of a proposed Briarcliff map is at http://brookhavenga.gov/home/showdocument?id=1757